Last year during the Summer of Weeds I inadvertently wrote about several edible weeds, one of which I even ate. It’s not surprising that so many weeds are edible; there are plenty of plants out there – both native and introduced – that are, despite the fact that most of us stick with whatever is made available at the grocery store. Some edible weeds, dandelion included, were once commonly grown for food, while other weeds are close relatives of present day agricultural crops. The more I read about these things and the more my weeds obsession grows, the more I feel compelled to eat them (the edible ones, at least). Hence, a new series of posts: Eating Weeds.

I might as well start with an easy one. Chenopodium album, or lambsquarters, which I wrote about last summer, is a close relative of a number of common crops and a spitting image of quinoa. It happily grows alongside other plants in our vegetable gardens without even being asked to. It is highly nutritious and palatable – particularly the young leaves – and can be eaten raw or cooked. It is often compared to spinach and can be prepared and used in similar ways. 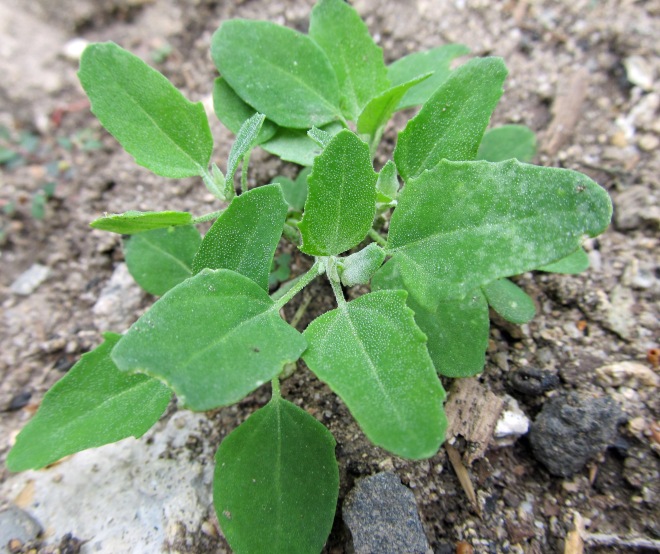 For the purposes of this post, I decided to try lambsquarters pesto. While pesto is traditionally made using basil leaves, all kinds of other leaves – or combinations thereof – can be substituted. I have made pesto with parsley, which was interesting, as well as watercress, which was delicious. The possibilities are endless. So, why not lambsquarters?

Making pesto is incredibly simple. Blend together a combination of leaves, garlic, nuts or seeds, Parmesan cheese (or something similar), olive oil, salt, and pepper. Pine nuts are traditionally used to make pesto, but like the leaf component, a number of different nuts or seeds can be substituted. I rarely make pesto with pine nuts because, despite being delicious, they are pricey. 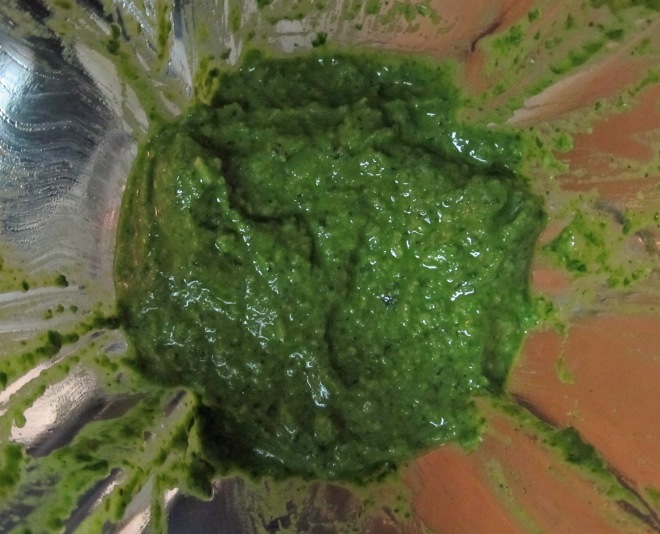 I made two batches of lambsquarters pesto. For the first I used walnuts, and for the second I used sunflower seeds. Both batches were delicious. How could they not be with all of that garlic and cheese in there? Lambsquarters is not a very bitter or strong-tasting green, so lambsquarters pesto might be perfect for anyone who is otherwise not fond of pesto (although that is a stance that I personally cannot fathom).

This is definitely something I will make again. I understand the frustration people have with lambsquarters. It can be prolific and hard to eliminate from a garden. Luckily, it makes an excellent pesto.

This series of posts was inspired in part by the book Dandelion Hunter, in which the author, Rebecca Lerner, attempts to go a full week eating only things she is able to forage in her hometown of Portland, Oregon. As you might imagine, many of the plants she forages are weeds.

Since we seem to be on the topic of edible weeds we may as well discuss lambsquarters, another frequently present and commonly eaten, nutritious and versitile weed. Botanically known as Chenopodium album, it is a member of the family Amaranthaceae and therefore related to several common (and uncommon) agricultural crops, including spinach (Spinacia oleracea), beets (Beta vulgaris), Swiss chard (also Beta vulgaris), amaranth (Amaranthus spp.), and red orach (Atriplex hortensis). Chenopodium, a genus consisting of 100 plus species, is also cultivated in various parts of the world for its edible leaves, stems, and seeds. Chenopodium quinoa, commonly known as quinoa, is now a popular “grain” in North America after being grown for millenia by Andean cultures.

Chenopodium album is a summer annual that reaches up to 6 feet tall with sturdy, angular stems and triangular, diamond-shaped, or lance-shaped leaves with irregularly toothed margins. The leaves are green on top and mealy gray-white on bottom. The flowers are tiny, petal-less, and organized in tight clusters at the ends of branches. In Botany In a Day, Thomas Elpel describes the flowers as “little green ‘globs’ forming along an upright stalk, sometimes colored with specks of yellow.” They are generally wind-pollinated, but are occassionally visited by pollinating insects. Each plant can produce tens of thousands of seeds, which are potentially viable for up to 40 years. 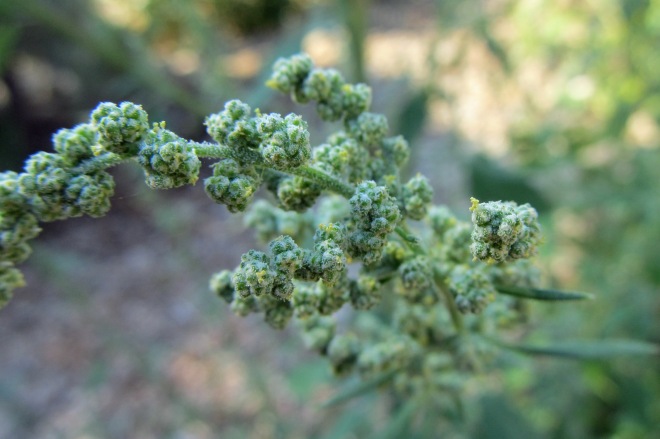 Lambsquartes is one of many common names for C. album (others include goosefoot, fat hen, baconweed, mealweed, frostblite, and wild spinach), and is a name with several proposed origins. Is it because the plant is commonly found growing in the manure-rich soils of barnyards? Or is it because the fuzzy undersides of the leaves are reminiscent of sheep’s wool? Perhaps it is because per weight, the harvested plants and a quarter of lamb contain roughly the same amount of protein? Who knows? Despite all this talk of sheep, however, large quantities of lambsquarters are reported to be poisonous to both sheep and pigs.

Though lambsquarters prefers nutrient-rich soils, it tolerates a wide variety of soil types, including dry, compacted, urban soil. It is drawn to all sorts of disturbed sites and is particularly abundant in gardens, agricultuaral fields, and roadsides. It readily hybridizes with other Chenopodium species, including the North American native C. berlandieri. In The Book of Field and Roadside, John Eastman calls it “one of the wold’s most abundant and noxious weeds,” because “it competes with some 40 crops [and] is especially invasive in tomato, potato, sugar beet, soybean, and corn fields.”

Eastman goes on to hint at lambsquarters’ potential for phytoremediation: “The plant accumulates high levels of nitrates and pesticides in addition to its oxalic acid content.” It also takes up heavy metals, including zinc, copper, and lead. This phenomenon is worth a future post, so stay tuned. 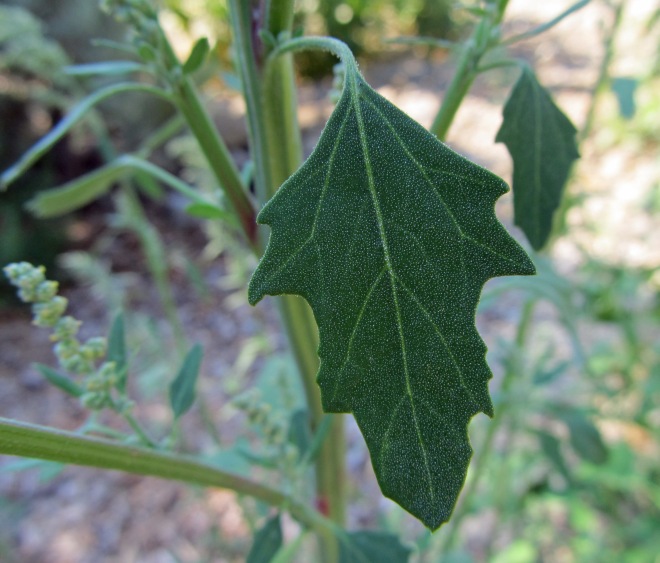 That being said, when harvested from a non-polluted site, lambsquarters is a very nutritious spinach-like green both raw and cooked. Younger leaves and plants are preferred because older ones tend to be higher in oxalic acid. The seeds are also edible and, like quinoa, can be used in a similar manner as common grain and cereal crops. Harvester ants and various bird species also collect and consume the seeds. The roots of lambsquarters are high in saponin and can be used to make soap.

There are many reasons to be impressed with Chenopodium album, including its ability to tolerate drougt and frost, its adaptability to all types of soil, its highly nutritious plant parts (but also potentially toxic due to accumalation of pollutants and oxalic acid), and its competitive and persistent nature. Ehrenfried Pfeiffer, author of Weeds and What They Tell, was in awe of this “most enduring annual weed” and its goosefoot family relatives, writing: “We have the feeling that the goosefoot was destined to play a better role than to become an obnoxious weed. They follow closely man’s steps, showing their inclination to be domesticated. Probably future plant breeders may develop new cultivated varieties out of this family long after our present cultivated plants have degenerated, for it is their extreme vitality and preserverence to grow that makes the goosefoot family so interesting.”

Pfeiffer’s predictions haven’t quite come to pass, but time will tell. 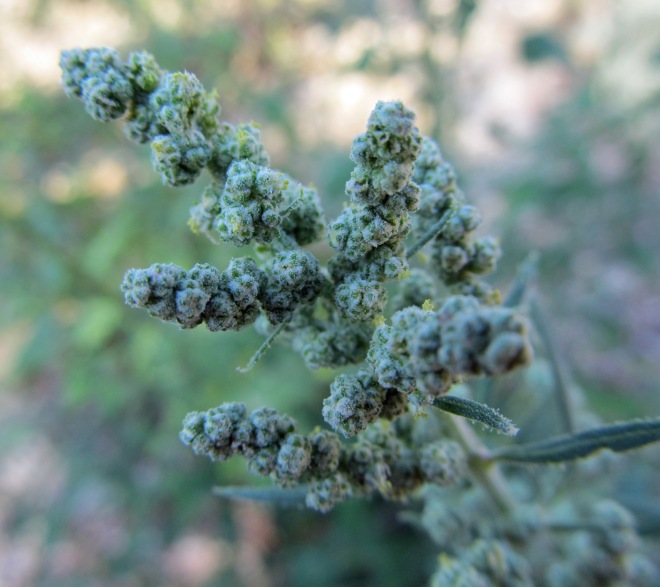 According to an article posted on LiveScience, lambsquarters is one of “The Five Healthiest Backyard Weeds.” The list includes two other weeds we have covered during the Summer of Weeds: Purslane and Plantain.