Crab spiders that hunt in flowers prey on pollinating insects. Thus, pollinating insects tend to avoid flowers that harbor crab spiders. We established this in part one. Now we ask, what effect, if any, does this interaction have on a crab spider infested plant’s ability to reproduce? More importantly, what are the evolutionary implications of this relationship?

In a study published in Ecological Entomology earlier this year, Gavini, et al. found that pollinating insects avoided the flowers of Peruvian lily (Alstroemeria aurea) when artificial spiders of various colors and sizes were placed in them. Bumblebees and other bees were the most frequent visitors to the flowers and were also the group “most affected by the presence of artificial spiders, decreasing the number of flowers visited and time spent in the inflorescences.” This avoidance had a notable effect on plant reproduction, namely a 25% reduction in seed set and a 15% reduction in fruit weight. The most abundant and effective pollinator, the buff-tailed bumblebee, was deterred by the spiders, leading the researchers to conclude that, “changes in pollinator behavior may translate into changes in plant fitness when ambush predators alter the behavior of the most effective pollinators.” 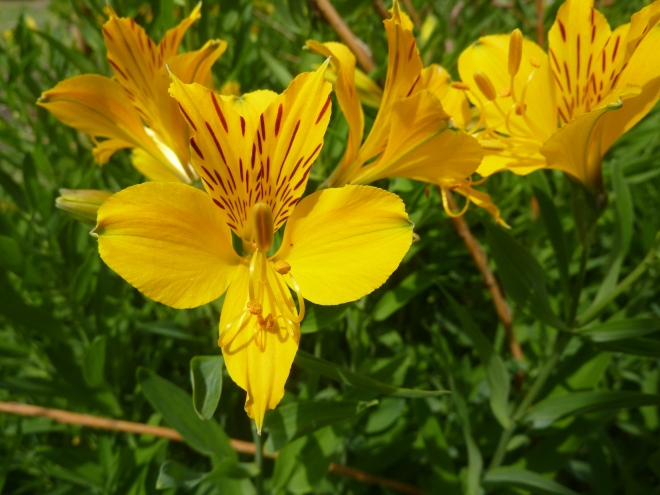 But missing from this discussion is the fact that crab spiders don’t only eat pollinators. Any flower visiting insect may become a crab spider’s prey, and that includes florivores. In which case, crab spiders can benefit a plant, saving it from reproduction losses by eating insects that eat flowers.

In April of this year, Nature Communications published a study by Knauer, et al. that examined the trade-off that occurs when crab spiders are preying on both pollinators and florivores. Four populations of buckler-mustard (Biscutella laevigata ssp. laevigata) were selected for this study. Bees are buckler-mustard’s main pollinator, and in concurrence with other studies, they significantly avoided flowers when crab spiders were present.  Knauer, et al. also determined that bees and crab spiders are attracted to the same floral scent compound, β-ocimene. This compound not only attracts pollinators, but is also emitted when plants experience herbivory, possibly to attract predators to come and prey on whatever is eating them.

In this study, the predators called upon were crab spiders. Florivores had a notable impact on plants in this study, and the researchers found that when crab spiders were present, florivores were significantly reduced, thereby reducing their negative impact. They also noted that “crab spiders showed a significant preference for [florivore-infested] plants over control plants.”

And so it is, a plant’s floral scent compound attracts pollinators while simultaneously attracting the pollinator’s enemy, who is also called in to protect the flower from being eaten. Luckily, in this case, buckler-mustard is easily pollinated, so the loss of a few pollinators isn’t likely to have a strong negative effect on reproduction. As the authors write, “pollinators are usually abundant and the low number of ovules per flower makes a few pollen grains sufficient for a full seed set.” 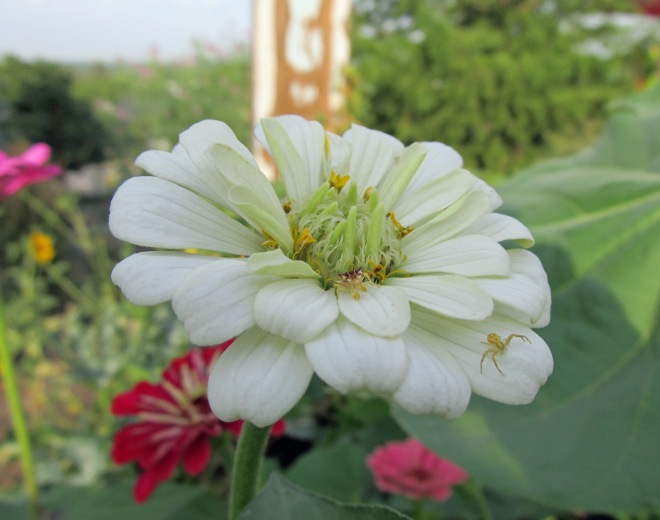 But none of these studies are one size fits all. Predator-pollinator-plant interactions are still not well understood, and there is much to learn through future research. A meta-analysis published in the Journal of Animal Ecology in 2011 looked at the research that had been done up to that point. Included were a range of studies involving sit-and-wait predators (like crab spiders and lizards) as well as active hunters (like birds and ants) and the effects of predation on both pollinators and plant-eating insects. They concluded that where carnivores “disrupted plant-pollinator interactions, plant fitness was reduced by 17%,” but thanks to predation of herbivores, carnivores helped increase plant fitness by 51%. This suggests that carnivores, overall, have a net positive effect on plant fitness.

Many pollinating insects have an advantage over plant-eating insects because they move quickly from flower to flower and plant to plant, unlike many herbivores which move more slowly. This protects pollinators from predation and helps explain why plant-pollinator interactions are not disrupted as easily by carnivores. Additionally, as the authors note, “plants may be buffered against loss of pollination by attracting different types of pollinators, some of which are inaccessible to carnivores.”

But again, there is still so much to discover about these complex interactions. One way to gain a better understanding is to investigate the effects of predators on both pollinators and herbivores in the same study, since many of the papers included in the meta-analysis focused on only one or the other. As far as crab spiders go, Knauer, et al. highlight their importance in such studies. There are so many different species of crab spiders, and they are commonly found on flowers around the globe, so “their impact on plant evolution may be widespread among angiosperms.”

In other words, while we still have a lot to learn, the impact these tiny but skillful hunters have should not be underestimated.

When a bee approaches a flower, it is essentially approaching the watering hole. It comes in search of food in the form of pollen and nectar. As is this case with other animals who come to feed at the watering hole, a flower-visiting bee makes itself vulnerable to a variety of predators. Carnivores, like the crab spider, lie in wait to attack.

The flowers of many plants rely on visits from bees and other organisms to assist in transferring pollen from stamens to stigmas, which initiates reproduction; and bees and other flower visitors need floral resources to survive. Crab spiders exploit this otherwise friendly relationship and, in doing so, can leave lasting impacts on both the bees and the flowers they visit.

Species in the family Thomisidae are commonly referred to as crab spiders, a name that comes from their resemblance to crabs. Crab spiders don’t build webs to catch prey; instead they either actively hunt for prey or sit and wait for potential prey to happen by, earning them the name ambush predators. Of the hundreds of species in this family, not all of them hunt for prey in flowers; those that do – species in the genera Misumena and Thomisus, for example – are often called flower crab spiders.

Most crab spiders are tiny – mere millimeters in size – and they have a number of strategies (depending on the species) to obscure their presence from potential prey. They can camouflage themselves by choosing to hunt in a flower that is the same color as they are or, in the case of some species, they can change their color to match the flower they are on. Some species of crab spiders reflect UV light, which bees can see. In doing so, they make themselves look like part of the flower.

Using an Australian species of crab spider, researchers found that honey bees preferred marguerite daisies (Chrysanthemum frutescens) on which UV-reflecting crab spiders were present, even when the scent of the flowers was masked. The spiders’ presence was seen as nectar guides, which “bees have a pre-existing bias towards.” Members of this same research team also determined that both crab spiders and honey bees choose fragrant flowers over non-fragrant flowers, and that, ultimately, “honey bees suffer apparently from responding to the same floral characteristics as crab spiders do.”

A study published in Oikos in 2003 observed patches of common milkweed (Asclepias syriaca) – one set was free of crab spiders, the other set was not – and tracked the visitations of four species of bees – the common honey bee and three species of bumble bees. They compared visitation rates between both sets of milkweed patches and found that the smallest of the three bumble bee species decreased its frequency of visitation to the crab spider infested milkweeds. Honey bees also appeared to visit the infested milkweeds less, but the results were not statistically significant. The two larger species of bumble bees continued to forage at the same rate despite the presence of crab spiders.

During the study, crab spiders were seen attacking bees numerous times. Six attacks resulted in successful kills, and of the bees that escaped, 80% left the flower and either moved to a different flower on the same plant, moved to a different plant, or left the patch altogether. These results indicate a potential for the presence of crab spiders to effect plant-pollinator interactions, whether its directly (predation) or indirectly (bees avoiding flowers with crab spiders).

The researchers then exposed honey bees to the flowers of sage-leaf rockrose that were at the time spider-free but showed signs that crab spiders had recently visited. Some of the flowers featured the scent of crab spiders, others had spider silk attached to them, and others had the corpses of dead bees on them. They found that even when crab spiders were no longer present, the bees could still detect them. Honey bees were particularly deterred by the presence of corpses. The long-horned bees were also exposed to the flowers with corpses on them but didn’t show a significant avoidance of them.

An interesting side note about the presence of silk on flowers. As stated earlier, crab spiders do not spin webs; however, they do spin silk for other reasons, including to tether themselves to flowers while hunting. The authors recount, “on several occasions when an attempted attack was observed during this study, it was only the presence of a silk tether that prevented spiders being carried away from flowers by their much larger prey.”

So, again, if bees are avoiding flowers due to the presence of predators like crab spiders, what effect, if any, is this having on the plants? We will address this question in part two.