I’m sure that anyone living through the events of 2020 would agree, these are truly wild times. So, when I stumbled across some purple coneflowers that appeared to be growing flowers out of flowers, I thought to myself, “Of course! Why not!?!” The world is upside down. Anything is possible. 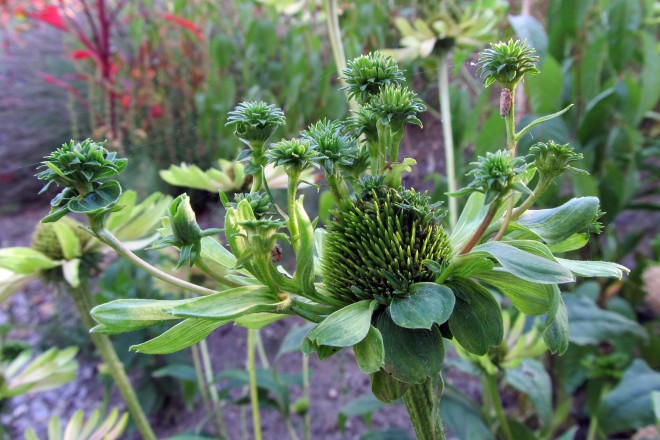 As it turns out, however, this phenomenon occurs more frequently than I was aware. But it’s not necessarily a good thing, particularly if you’re concerned about plant health. We’ll get to that in a minute. First, what’s going on with these flowers? 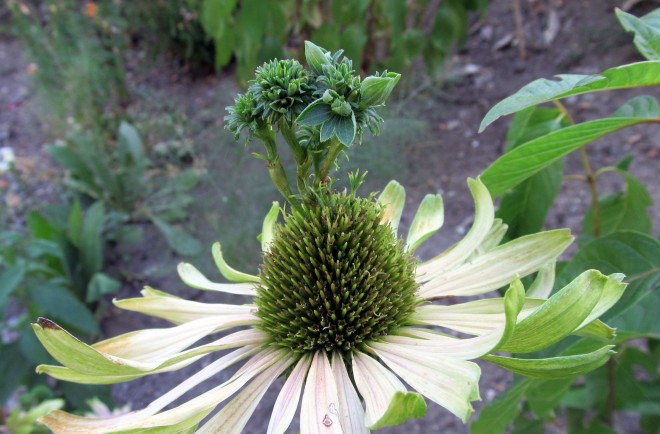 Flowers in the aster family are unique. They have the appearance of being a single flower but are actually a cluster of two types of much smaller flowers all packed in together. Purple coneflower (Echinacea purpurea) is a great example of this. Its flower heads are composed of dozens of disc flowers surrounded by a series of ray flowers. The minuscule disc flowers form the cone-like center of the inflorescence. The petals that surround the cone are individual ray flowers. This tight cluster of many small flowers (or florets) is known as a composite. Sunflowers are another example of this type of inflorescence.

Flowers are distinct organs. Not only are they the reproductive structures of flowering plants, but unlike the rest of the plant, they exhibit determinate growth. Flowers are, after all, plant shoots that have been “told” to stop growing like other shoots and instead modify themselves into reproductive organs and other associated structures. Unlike other shoots, which continue to grow (or at least have the potential to), a flower (and the fruit it produces) is the end result for this reproductive shoot. This is what is meant by determinate growth. However, sometimes things go awry, and the modified shoots and leaves that make up a flower don’t develop as expected, producing some bizarre looking structures as a result.

An example of this is a double flower. Plants with double flowers have mutations in their genes that cause disruptions during floral development. This means that their stamens and carpels (the reproductive organs of the flowers) don’t develop properly. Instead, they become additional petals or flowers, resulting in a flower composed of petals upon petals upon petals – a look that some people like, but that have virtually nothing to offer the pollinators that typically visit them. Because of their ornamental value, double-flowered varieties of numerous species – including purple coneflower – can be found in the horticultural trade. 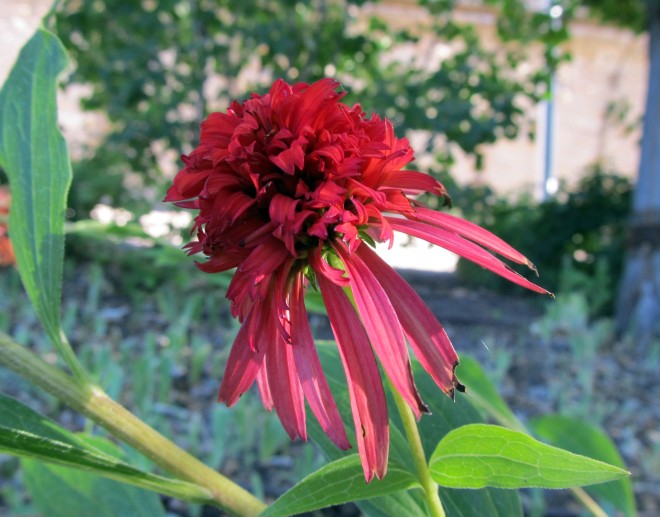 Genetic mutations are one way that odd looking flowers come about. It is not the cause, however, of the freak flowers that I recently came across. What I witnessed was something called phyllody and was the result of an infection most likely introduced to the plant by a leafhopper or some other sap-sucking insect. Phyllody, which has a variety of causes, is a disruption in plant hormones that leads to leaves growing in place of flower parts. As a result, the flowers become sterile and green in color. In the case of purple coneflower, leafy structures are produced atop shoots arising from the middle of ray and/or disc florets. In other species, shoots aren’t visible and instead the inflorescence is just a cluster of leaves. In a sense, the reproductive shoot has returned to indeterminate growth, having switched back to shoot and leaf production. 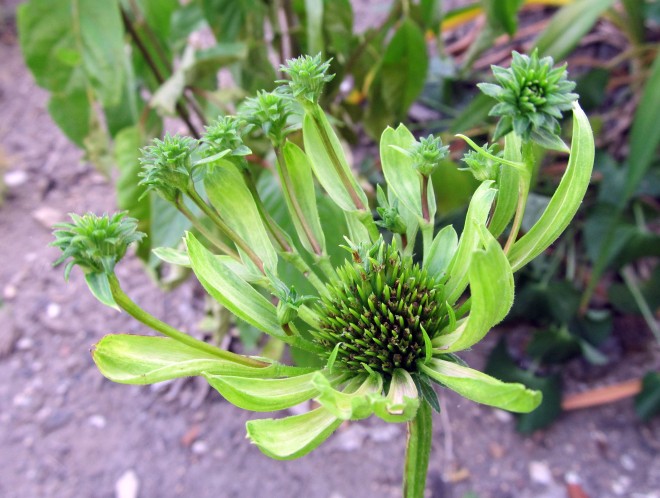 Phyllody can have either biotic or abiotic causes. Biotic meaning infection by plant pathogens – including certain viruses, bacteria, and fungi – or damage by insects. Abiotic factors like hot weather and lack of water can result in a temporary case of phyllody in some plants. Phyllody plus a number of other symptoms made it clear that the purple coneflower I encountered had a fairly common disease known as aster yellows. This condition is caused by a bacterial parasite called a phytoplasma, and is introduced to the plant via a sap-sucking insect. It then spreads throughout the plant, infecting all parts. The phyllody was a dead give away, but even the flowers that weren’t alien-looking were discolored. The typical vibrant purple of the ray flowers was instead a faded pink color. The flowers that had advanced phyllody – along with the rest of the plant – were turning yellow-green.

This inflorescence isn’t exhibiting phyllody yet, but the purple color in the ray flowers is quickly fading.

Hundreds of plant species are susceptible to aster yellows, and not just those in the aster family. Once a plant is infected with aster yellows, it has it for good and will never grow or reproduce properly. For this reason, it is best to remove infected plants from the garden to avoid spreading the infection to other plants. As cool as the flowers may look, infected plants just aren’t worth saving.

In spite of a global pandemic, the third annual Boise Goathead Fest took place last Saturday in Boise, Idaho. In order to make it happen, organizers had to think creatively, completely reenvisioning the event in order to keep the community safe and healthy. This, of course, meant no giant bike parade and no large gathering in the park. Instead, members of individual households embarked on their own socially-distanced bike rides, meeting up in small groups for a wide variety of mini-events across town. An online radio show made possible by Radio Boise provided the day’s soundtrack and kept us all up to date with regular live announcements.

On Saturday morning, Sierra and I decorated our bikes and ourselves and headed out on our two-person bike parade. Our first stop was the Goathead Monster’s Lair located in the alley behind Boise Bicycle Project. There we picked up food, beverages, and a map. The list of places to go and things to see was extensive. At our relaxed pace, there was no way we were going to see it all, which wasn’t really our goal anyway. Times are strange, and we were just happy to be out in the world taking part in another Goathead Fest. 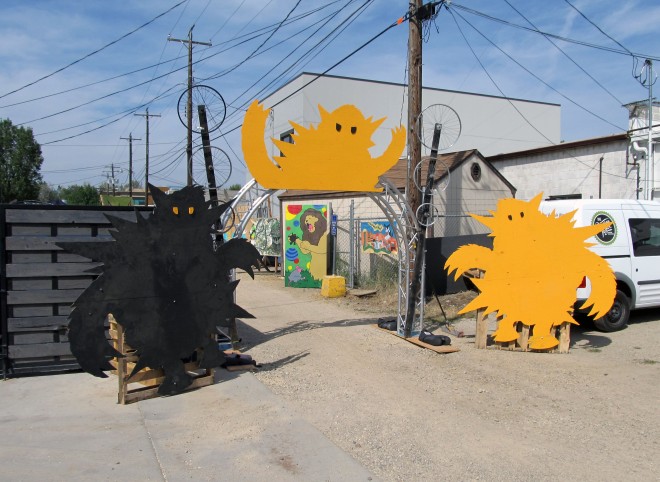 Entrance to the Goathead Monster’s Lair 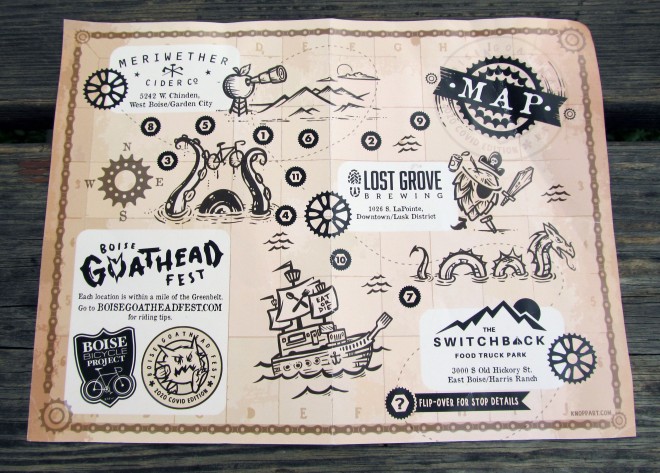 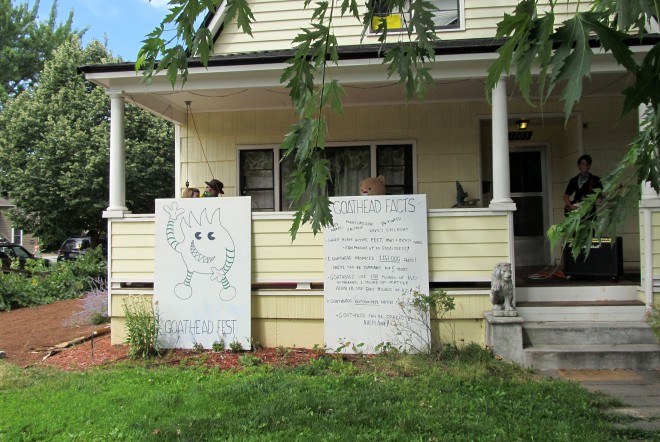 Learning some facts about goatheads with Mr. A on guitar and violin 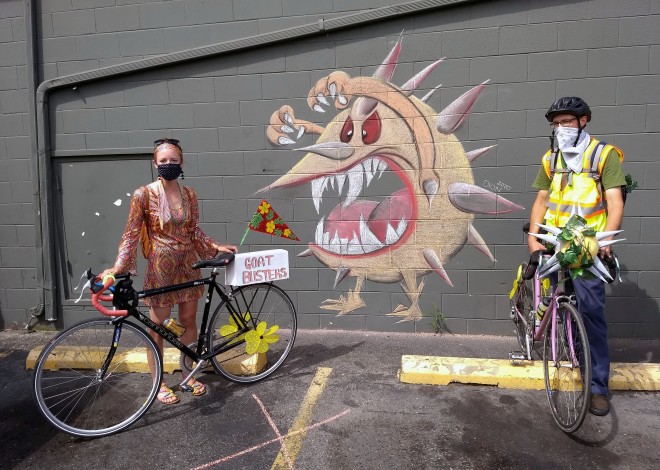 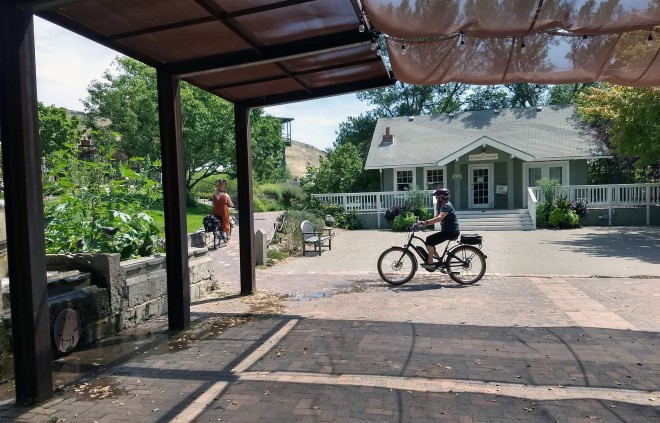 Bikes were allowed at Idaho Botanical Garden for one hour only – a Goathead Fest exclusive!

Not only is the Goathead Fest a celebration of bicycles and community and an opportunity to raise money for pedal-powered non-profits in the Treasure Valley, it’s also a way to bring awareness to a noxious weed responsible for countless flat tires year in and year out. Tribulus terrestris is the bane of bicyclists. Its round, spiky fruits lie in wait to royally ruin our rides. Thanks to collection efforts that take place in the months leading up to the Goathead Fest, thousands of pounds of puncture vine are removed from our streets each year.

This year, another round, spiky ball threatened to ruin our ride. This threat is much smaller and considerably more damaging. Invisible to the naked eye, it has infected hundreds of members of our community, killing many of them, much like it has done in communities across the world. With the threat of COVID-19 looming over our heads, the Boise Goathead Fest felt and looked much different. We masked up and tried to keep our distance from each other. We dispersed ourselves across the city and enjoyed the company of much smaller crowds. As someone who, apart from work and occassional trips to the store, has largely removed himself from social gatherings, I felt nervous to be out. Thanks to the thoughtfulness and awareness of Goathead Fest organizers, my fears were largely soothed. It was important for me to, once again, be together with Boise’s bicylce community and feel a renewed sense of hope for the future.

We are all looking forward to the day when the only round, spiky ball that threatens to keep us off our bikes are those blasted goatheads, and even those – if we keep at it – might someday be a thing of the past.