Flowers that are visited and/or pollinated by hummingbirds typically fit the following description: petals are brightly colored, often red; petals are fused to form a long, narrow tube; a “landing pad” is absent; abundant nectar is produced deep within the flower; and fragrance is weak or nonexistent. Scarlet gilia (Ipomopsis aggregata) is a typical example of such a flower, and hummingbirds are indeed among its most common visitors. But there is so much more to the story.

Scarlet gilia (also commonly known as skyrocket) is a wildflower in the phlox family (Polemoniaceae) that occurs in many parts of western North America. It is considered a biennial or short-lived perennial. It spends the first year or so of its life as a compact rosette of fern-like leaves. Later it sends up a branched, flowering stem that can reach 5 feet tall or more. The flowers are slender, trumpet-shaped, and composed of five fused petals that flare outward creating five prominent, pointed lobes. They are self-incompatible and require a pollinator in order to set seed. The stamens of an individual flower produce mature pollen before the stigma of that flower is ready to receive it – this is called protandry and is one mechanism of self-incompatibility. 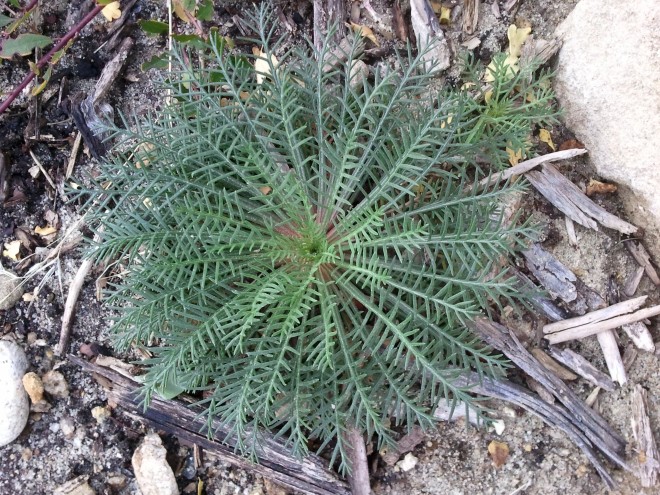 The flowering period of scarlet gilia can last several months. Depending on the location, it can begin in mid-summer and continue through the fall. During this period, it produces dozens of flowers. It is also at this time that it runs the risk of being browsed by elk, mule deer, and other animals. This doesn’t necessarily set it back though, as it has the potential to respond by producing additional flowering stalks and more flowers. Its flowers are visited by a variety of pollinators including bumblebees, hawkmoths, butterflies, syrphid flies, solitary bees, and of course, hummingbirds. But hummingbirds, in many parts of scarlet gilia’s range are migratory, and that’s where things get interesting.

Early flowers of scarlet gilia are usually red. As the season progresses, flowers slowly shift from red to pink. In some cases, they lose all pigmentation and become white. In the early 1980’s, pollination biologists Ken Paige and Thomas Whitman set out to determine the reason for this shift in flower color. They spent three years observing a population of scarlet gilia on Fern Mountain near Flagstaff, Arizona. They noted that the change in flower color corresponded with the migration of hummingbirds and that the now lighter colored flowers continued to be pollinated by hawkmoths until the end of the flowering season. 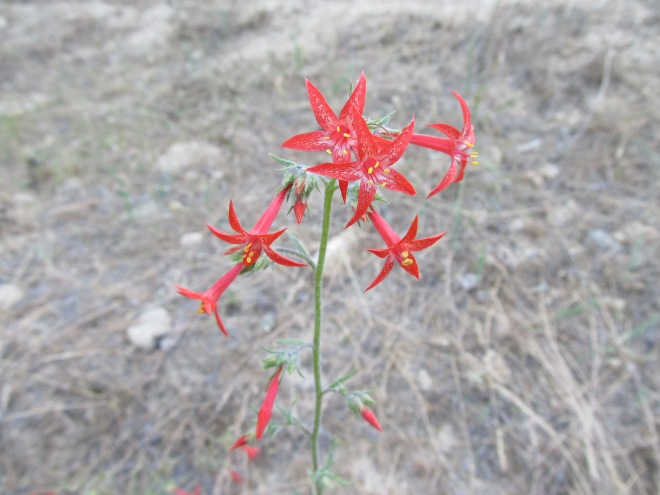 A series of experiments and observations led them to conclude that hummingbirds prefer darker colored flowers and hawkmoths prefer lighter colored flowers. By shifting to a lighter flower color, scarlet gilia appeared to be taking advantage of remaining pollinators after hummingbirds had migrated. They also concluded that the color change was not the cause of hummingbird migration since other flowers with nectar-rich, red, tubular flowers (specifically Penstemon barbatus) remained available in the area throughout their migration. It was also noted that the flowers of scarlet gilia shifted the timing of nectar production, presumably to better match the behavior of hawkmoths which are more active in the evenings.

No plants were observed shifting from light colored flowers to dark colored flowers, which further supported their conclusion. They also compared the population they studied to populations that do not lose their hummingbird pollinator and noted that when hummingbirds remain, the flowers of scarlet gilia don’t change color. 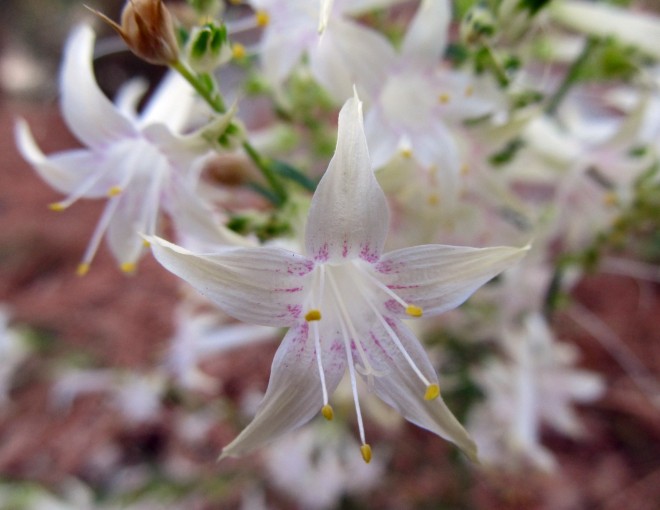 But just how effective are hummingbirds as pollinators of scarlet gilia? A seperate study carried out by a different group of researchers determined that, while hummingbirds were “the most common floral visitor,” long-tongued bumblebees were the more effective pollinator when it came to pollen deposition and seed set. The study involved observations of a scarlet gilia population in Colorado over a 5 year period. Considering how well the floral traits of scarlet gilia match up with the hummingbird pollination syndrome, it is surprising to learn that long-tongued bumblebees are comparatively more effective at pollinating them.

This study provides further evidence against strict adherence to pollination syndromes and the most effective pollinator principle, both of which imply specialized plant-pollinator interactions. (I wrote about these topics here, here, and here in earlier Year of Pollination posts.) In their discussion, the authors propose two possible explanations as to why scarlet gilia, despite its phenotypic floral traits, does not appear to be specialized. One explanation is that “natural selection favors a specialized [floral] morphology that excludes all but a single type of visitor, but there are constraints on achieving this outcome.” Perhaps the pollinators aren’t cooperating; their opportunism is leading them to “exploit flowers on which they can realize an energetic profit, even if they do not mechanically ‘fit’ very well.” The “sensory abilities” of the pollinators may be “broadly tuned,” making it difficult for plants to develop flowers with “private signals detectable only by specific types of pollinators.”

The second explanation proposed by the authors is that “selection favors some degree of floral generalization, but that flowers can retain features that adapt them to a particular type of pollinator in spite of generalization.” In the case of scarlet gilia, specialization could be detrimental because after they send up their flower stalks, they are doomed to die. This gives them only one season to set seed, and if hummingbirds are either not available that year or only available in limited numbers, a scarlet gilia population can lose the opportunity to reproduce. As the authors put it, “the fact that individual plants enjoy only a single season of reproduction, suggests the value of ‘backup’ pollinators.” This may also explain why flower color shifts in order to take full advantage of hawkmoth pollination after hummingbirds are gone.

Scarlet gilia is not only a beautiful and widespread wildflower, but also a plant with a very interesting story. Follow the links below to learn more about this fascinating plant:

A few weeks ago I wrote about pollination syndromes – sets of floral triats that are said to attract specific groups of pollinators. In that post I discussed how pollination syndromes have largely fallen out of favor as a reliable method of predicting the pollinators that will visit particular flowers. In this post I review a recent study involving a species of cactus in Argentina that, as the authors state in their abstract, “adds another example to the growing body of mismatches between floral syndrome and observed pollinator.”

Denmoza rhodacantha is one of many species of cacti found in Argentina. It is the only species in its genus, and it is widely distributed across the east slopes and foothills of the Andes. It is a slow growing cactus, maintaining a globulous (globe-shaped) form through its juvenile phase and developing a columnar form as it reaches maturity. D. rhodacantha can reach up to 4 meters tall and can live beyond 100 years of age. Individual plants can begin flowering in their juvenile stage. Flowers are red, nectar rich, scentless, and tubular. The stigma is lobed and is surrounded by a dense grouping of stamens. Both male and female reproductive organs are extended above the corolla. The flowers have been described by multiple sources as being hummingbird pollinated, not based on direct observation of hummingbirds visiting the flowers, but rather due to the floral traits of the species.

In a paper entitled, Flowering phenology and observations on the pollination biology of South American cacti – Denmoza rhodacantha, which was published in volume 20 of Haseltonia (the yearbook of the Cactus and Succulent Society of America), Urs Eggli and Mario Giorgetta discuss their findings after making detailed observations of a population of D. rhodacantha in early 2013 and late 2013 – early 2014. The population consisted of about 30 individuals (both juveniles and adults) located in the Calchaqui Valley near the village of Angastaco, Argentina. At least three other species with “hummingbird-syndrome flowers” were noted in the area, and three species of hummingbirds were observed during the study periods. Over 100 observation hours were logged, and during that time “the studied plants, their flowering phenology, and flower and fruit visitors were documented by means of photographs and video.”

The flowers of D. rhodacantha only persist for a few short days, and in that time their sexual organs are only receptive for about 24 hours. The flowers are self-sterile and so require a pollinator to cross pollinate them. Despite their red, tubular shape and abundant nectar, no hummingbirds were observed visiting the flowers. One individual hummingbird approached but quickly turned away. Hummingbirds were, however, observed visiting the flowers of an associated species, Tecoma fulva ssp. garrocha. Instead, a species of halictid bee (possibly in the genus Dialictus) was regularly observed visiting the flowers of D. rhodacantha. The bees collected pollen on their hind legs and abdomen and were seen crawling across the lobes of the stigma. None of them were found feeding on the nectar. In one observation, a flower was visited by a bee that was “already heavily loaded with the typical violet-coloured pollen of Denmoza,” suggesting that this particular bee species was seeking out these flowers for their pollen. Small, unidentified beetles and ants were seen entering the flowers to consume nectar, however they didn’t appear to be capable of offering a pollination service.

D. rhodacantha populations have been observed in many cases to produce few fruits, suggesting that pollination success is minimal. The authors witnessed “very low fruit set” in the population that they were studying, which was “in marked contrast to the almost 100% fruit set rates of the sympatric cactus species at the study site.” This observation wasn’t of great concern to the authors though, because juvenile plants are present in observed populations, so recruitment appears to be occurring. In this study, dehisced fruits were “rapidly visited by several unidentified species of ants of different sizes.” The “scant pulp” was harvested by smaller ants, and larger ants carried away the seeds after “cleaning them from adhering pulp.”

The authors propose at least two reasons why hummingbirds avoid the flowers of D. rhodacantha. The first being that the native hummingbirds have bills that are too short to reach the nectar inside the long tubular flowers, and often the flowers barely extend beyond the spines of the cactus which may deter the hummingbirds from approaching. The second reason is that other plants in the area flower during the same period and have nectar that is easier to gather. The authors acknowledge that this is just speculation, but it could help explain why the flowers are pollinated instead by an insect (the opportunist, generalist halictid bee species) for whom the flowers “could be considered to be ill adapted.” The authors go on to say, “it should be kept in mind, however, that adaptions do not have to be perfect, as long as they work sufficiently well.”

Patagona gigas (giant hummingbird) was observed approaching the flower of a Denmoza rhodacantha but quickly turned away (photo credit: www.eol.org)