One of the most ubiquitous plants in cut flower arrangements hails from the steppes of Turkey and neighboring countries in Europe and Asia. It’s a perennial plant with a deep taproot and a globe-shaped, multi-branched inflorescence loaded with tiny white flowers. In full bloom it looks like a small cloud hovering above the ground. It’s airy appearance earns it the common name baby’s breath, and the attractive and durable nature of its flowers and flower stalks, both fresh and dried, have made it a staple in the floral industry. Sadly, additional traits have led to it becoming a troublesome weed outside of its native range.

Gypsophila paniculata is in the family Caryophyllaceae – sharing this distinction with other cut flowers like carnations and pinks, as well as other weeds like chickweed and soapwort. At maturity and in full bloom, baby’s breath might reach three to four feet tall; however, its thick taproot extends deep into the ground as much as four times its height. Its leaves are unremarkable and sparse, found mostly towards the base of the plant and sometimes with a blue or purplish hue. The flowers are numerous and small, have a sweet scent to them (though not appreciated by everyone), and are pure white (sometimes light purple or pink).

Each flower produces just a few seeds that are black, kidney-shaped, and minuscule. Many of them drop from their fruits and land near their parent plant, but some are retained within their little capsules as the flower stalk dries and becomes brittle. Eventually a stiff breeze knocks the entire inflorescence loose and sends it tumbling across the ground. Its rounded shape makes it an effective tumbleweed, as the remaining seeds are shaken free and scattered far and wide. 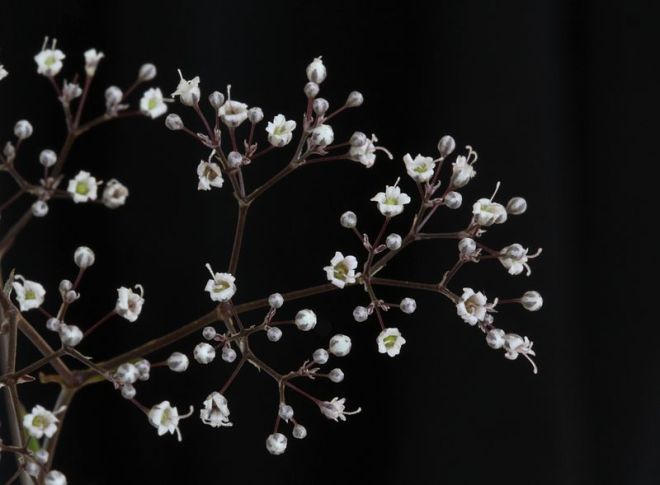 Being a tumbleweed gives it an advantage when it comes to dispersing itself and establishing in new locations, but this is not the only trait that makes baby’s breath a successful weed. Its substantial taproot, tolerance to drought and a variety of soil conditions, and proclivity to grow along roadsides, in ditches, and abandoned fields also make it a formidable opponent. Mowing the plant down does little to stop it, as it grows right back from the crown. Best bets for control are repeated chemical treatments or digging out the top portion of the taproots. Luckily its seeds are fairly short-lived in the soil, so vigilant removal of seedlings and not allowing the plant to reproduce can help keep it in check. Baby’s breath doesn’t persist in regularly disturbed soil, so it’s generally not a problem in locations that are often cultivated like agricultural fields and gardens.

The first introductions of baby’s breath to North America occurred in the 1800’s. It was planted as an ornamental, but it wasn’t long before reports of its weedy nature were being made. One source lists Manitoba in 1887 as the location and year of the first report. It is now found growing wild across North America and is featured in the noxious weed lists in a few states, including Washington and California. It has been a particular problem on sand dunes in northwest Michigan, where it has been so successful in establishing itself that surveys have reported that 80% of all vegetation in certain areas is composed of baby’s breath.

baby’s breath in the wild (via wikimedia commons)

Invading sand dune habitats is particularly problematic because extensive stands of such a deep-rooted plant can over-stabilize the soil in an ecosystem adapted to regular wind disturbance. Plants native to the sand dunes can be negatively affected by the lack of soil movement. One species of particular concern is Pitcher’s thistle (Cirsium pitcheri), a federally threatened plant native to sand dunes along the upper Great Lakes. Much of the research on the invasive nature of baby’s breath and its removal comes from research being done in this region.

Among numerous concerns that invasive plants raise are the affects they can have on pollinator activity. Will introduced plants draw pollinators away from native plants or in some other way limit their reproductive success? Or might they help increase the number of pollinators in the area, which in turn could benefit native plants (something known as the magnet species effect)? The flowers of baby’s breath rarely self-pollinate; they require insect visitors to help move their pollen and are highly attractive to pollinating insects. A study published in the International Journal of Plant Sciences found that sand dune sites invaded by baby’s breath attracted significantly more pollinators compared to uninvaded sites, yet this did not result in more pollinator visits to Pitcher’s thistle. According to the researchers, “a reduction in pollinator visitation does not directly translate to a reduction in reproductive success,” but the findings are still a concern when it comes to the future of this threatened thistle.

Perhaps it’s no surprise that a plant commonly found in flower arrangements is also an invasive species, as so many of the plants we’ve grown for our own pleasure or use have gone on to cause problems in areas where they’ve been introduced. However, could the demand for this flower actually be a new business opportunity? Noxious weed flower bouquets anyone?