I live in the city of Boise – a bustling metropolis by Idaho’s standards. It is located in the high desert of the Intermountain Northwest in a region called the sagebrush steppe. Our summers are hot and dry, and our native flora reflects this.

When I leave my apartment I am greeted by a flowering quince (Chaenomeles sp.). At this time of year it is in full bloom and looking amazing. It originated in East Asia. To my left I see a tree of heaven (Ailanthus altissima), a common urban tree that came to America from China via Europe. To my right there is a row of Norway maples (Acer platanoides), another popular urban tree. As its common name suggests, it is a European species that is distributed across large portions of eastern and central Europe. None of these plants are native to the sagebrush steppe, nor would they survive the harsh conditions without supplemental irrigation. All are horticultural introductions.

But there is another thing that at least two of these species have in common. Tree of heaven and Norway maple are considered invasive species in North America due to their propensity to spread into natural areas and disrupt native ecosystems. They also have a reputation of being pesky urban weeds.

My experience isn’t unique. Yards across North America are planted largely with species that are not native to this continent, and while most species stay where we plant them, a significant portion of them have leaped out of our tidy landscapes and disseminated themselves across natural areas, earning them the title invasive species.

In a paper published in BioScience (2001), Sarah Hayden Reichard and Peter White discuss the role that horticulture has played in introducing invasive species to the United States. Humans have a long history of moving plants from one part of the world to another for food, fuel, and fiber. However, collecting plants from around the world and organizing them into gardens for aesthetic purposes is, by comparison, a more recent thing. Species used for ornamental horticulture are what Reichard and White are concerned about.

As an introduction, Reichard and White offer a quick history of the beginnings of ornamental horticulture in the United States. This period is summed up well in an article by Richard Mack and Mark Lonsdale in the same issue of BioScience:

As colonists became more secure in their new environments, they began to import ornamental species from their homelands and elsewhere, in simultaneous quests for both familiar and unfamiliar plants. These plant importations sprang from deep-seated or primal aspects of human behavior shared by people in former colonies and homelands alike. … Many needed to be reassured with familiar plants from home, and they also had seemingly antithetical desires to experience novel, exotic ornamental plants.

Today, plant explorations continue throughout the world, often with the goal of introducing new plant species to the horticulture trade, and avid gardeners remain eager to find something new and interesting to add to their yards. There is nothing inherently wrong with this. Nor is there anything inherently wrong with filling our yards with exotic plants. The trouble comes when these plants escape cultivation and cause problems in neighboring ecosystems. Bringing awareness to this darker side of ornamental horticulture is what Reichard and White endeavor to do. 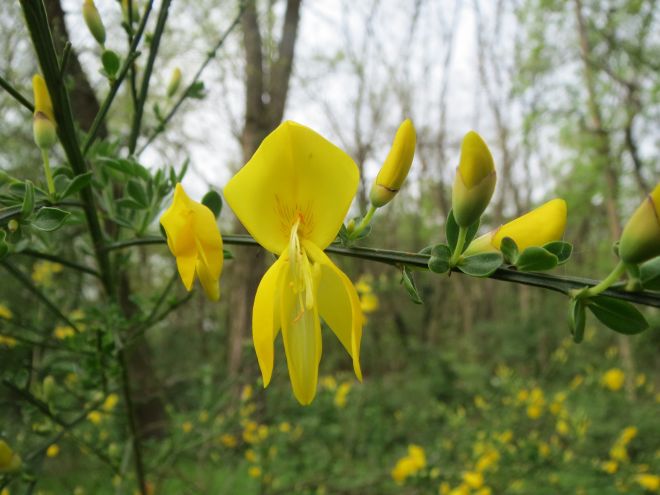 “Thomas Jefferson, an avid horticulturist, also introduced several species. He may have been the first person to introduce Cytisus scoparius (Scotch broom) as an ornamental species; that plant is now an invasive species in many parts of North America.” — Reichard and White (2001) [photo credit: www.eol.org]

Major players involved in the global movement of horticultural specimens include botanical gardens and arboreta, nurseries, garden clubs and horticultural societies, and the seed trade industry. The motives for transporting species vary among the groups, as do their roles in addressing the invasive species issue. Many botanical gardens have extensive plant exploration programs, which today are often more conservation focused than they were in the past; however, some of the species acquired during these explorations are released to the public, often without certainty that they won’t spread.

Even though most nurseries don’t have active plant exploration programs, they may acquire plants from nurseries or other institutions that do. For business reasons, plants may be sold before they have been properly screened for invasive-ness. Some retail nurseries make an effort to not sell plants that are known invasives in their regions. However, there are plenty of mail order nurseries that may not be aware of or may simply ignore the fact that they are shipping plants to regions where they are invasive. Seed exchanges between garden clubs and botanical societies, as well as the seed trade industry, are also responsible for shipping species to areas where they are currently or may become invasive.

“Uninformed people sometimes dump their aquarium water and plants into local water sources, and many of the aquarium plants survive and multiply. Hydrilla verticillata, a very aggressive aquatic weed in the South, was probably introduced to provide a domestic source of this plant for the aquarium trade.” — Reichard and White (2001) [photo credit: wikimedia commons]

Plant exploration will continue, and many new plants will be introduced to the public through the horticulture trade. Rules and regulations help restrict some plant movement, but in a capitalist society such restrictions will ultimately be, as Reichard and White write, “a compromise between ideal invasive plant exclusion and trade facilitation.” Plants can be screened for invasivibility, but it is difficult to know if, when, and where a species may become invasive. Furthermore, given enough time, a species that appeared to stay put can suddenly start to spread (or could have been spreading all along unnoticed).

Reichard and White acknowledge that “the burden of finding a solution to the problems posed by invasive plants does not necessarily fall on the shoulders of [the horticulture] industry.” Various groups from broad disciplines will have to come to together to work towards a solution. Reichard and White offer some suggestions for working together. For example, invasive species biologists can share their research with the horticulture industry which can, in turn, communicate this information to the public through garden writers and speakers. Botanical gardens can take a leadership role by vowing to “first do no harm to plant diversity and natural areas” and by providing public education about the issue.

Efforts can be made to ban the sale of problematic plants and to encourage proper screening of new introductions, but public demand for certain plants may remain. So, “better communication from ecologists to the public about which species are causing problems will discourage people from buying them.” Involving the public in eradication efforts can also help raise awareness, as people can see first hand that plants in their yards have invaded the wild.