Violas keep a secret hidden below their foliage. Sometimes they even bury it shallowly in the soil near their roots. I suppose it’s not a secret really, just something out of sight. There isn’t a reason to show it off, after all. Showy flowers are showy for the sole purpose of attracting pollinators. If pollinators are unnecessary, there is no reason for showy flowers, or to even show your flowers at all. That’s the story behind the cleistogamous flowers of violas. They are a secret only because unless you know to look for them, you would have no idea they were there at all.

Cleistogamy means closed marriage, and it describes a self-pollinating flower whose petals remain sealed shut. The opposite of cleistogamy is chasmogamy (open marriage). Most of the flowers we are familiar with are chasmogamous. They open and expose their sex parts in order to allow for cross-pollination (self-pollination can also occur in such flowers). Violas have chasmogamous flowers too. They are the familiar five-petaled flowers raised up on slender stalks above the green foliage. Cross-pollination occurs in these flowers, and seed-bearing fruits are the result. Perhaps as a way to ensure reproduction, violas also produce cleistogamous flowers, buried below their leaves. 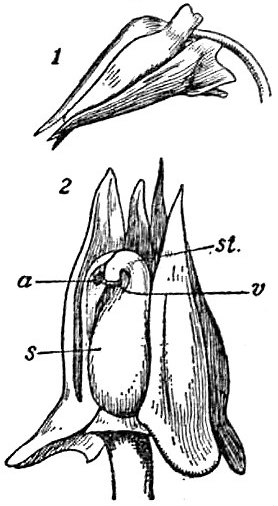 Flowers are expensive things to make, especially when the goal is to attract pollinators. Colorful petals, nectar, nutritious pollen, and other features that help advertise to potential pollinators all require significant resources. All this effort is worth it when it results in the ample production of viable seeds, but what if it doesn’t? Having a method for self-pollination ensures that reproduction will proceed in the absence of pollinators or in the event that floral visitors don’t get the job done. A downside, of course, is that a seed produced via self-pollination is essentially a clone of the parent plant. There will be no mixing of genes with other individuals. This isn’t necessarily bad, at least in the short term, but it has its downsides. A good strategy is a mixture of both cross- and self-pollination – a strategy that violas employ.

The cleistogamous flowers of violas generally appear in the summer or fall, after the chasmogamous flowers have done their thing. The fruits they form split open when mature and deposit their seeds directly below the parent plant. Some are also carried away by ants and dispersed to new locations. Seeds produced in these hidden flowers are generally superior and more abundant compared to those produced by their showy counterparts. People who find violas to be a troublesome lawn weed – expanding far and wide to the exclusion of turfgrass – have these hidden flowers to blame.

That being said, there is a defense for violas. In the book The Living Landscape by Rick Darke and Doug Tallamy, Tallamy writes: “Plants such as the common blue violet (Viola sororia), long dismissed by gardeners as a weed, can be reconstituted as desirable components of the herbaceous layer when their ecosystem functionality is re-evaluated. Violets are the sole larval food source for fritillary butterflies. Eliminating violets eliminates fritillaries, but finding ways to incorporate violets in garden design supports fritillaries.” 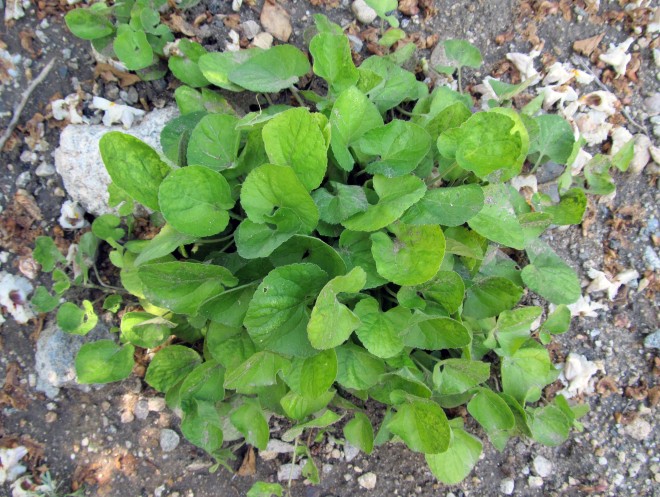 In my search for the cleistogamous flowers of viola, I dug up a sweet violet (Viola odorata). I was too late to catch it in bloom, but the product of its flowers – round, purple, fuzzy fruits – were revealed as I uprooted the plant. Some of the fruits were already opening, exposing shiny, light brown seeds with prominent, white elaiosomes, there to tempt ants into aiding in their dispersal. I may have missed getting to see what John Eastman calls “violet’s most important flowers,” but the product of these flowers was certainly worth the effort.

Up close and personal with the fruit of a cleistogamous flower