Major outbreaks of grasshoppers can be devastating. A plague of locusts of biblical proportions can decimate crop fields and rangelands in short order. Clouds of grasshoppers moving in and devouring every plant in sight makes it easy to see why these insects are often seen as pests. Even small groups of them can do significant damage to a garden or farm. Yet, grasshoppers and their relatives have great ecological value and are important parts of healthy ecosystems. Love them or hate them, they are an essential piece of a bigger picture.

Grasshoppers are in the order Orthoptera, an order that includes katydids, crickets, wetas, and a few other familiar and not so familiar insects. Worldwide, there are more than 27,000 species of orthopterans. These insects mostly feed on plants; many are omnivorous while others are exclusively herbivorous. They are most commonly found in open, sunny, dry habitats like pastures, meadows, disturbed sites, open woods, prairies, and crop fields. Most insects in this order are fairly large, making them easy to identify; yet they don’t seem to receive the same level of human attention that charismatic insects like bees and butterflies do. In Field Guide to Grasshoppers, Katydids, and Crickets of the United States, the authors defend this diverse group of arthropods: “Grasshoppers often are thought of as modest-looking brown or green insects, but many species in this family are brightly colored, and some of the most dull-colored species rival butterflies in beauty when they spread their wings in flight.” 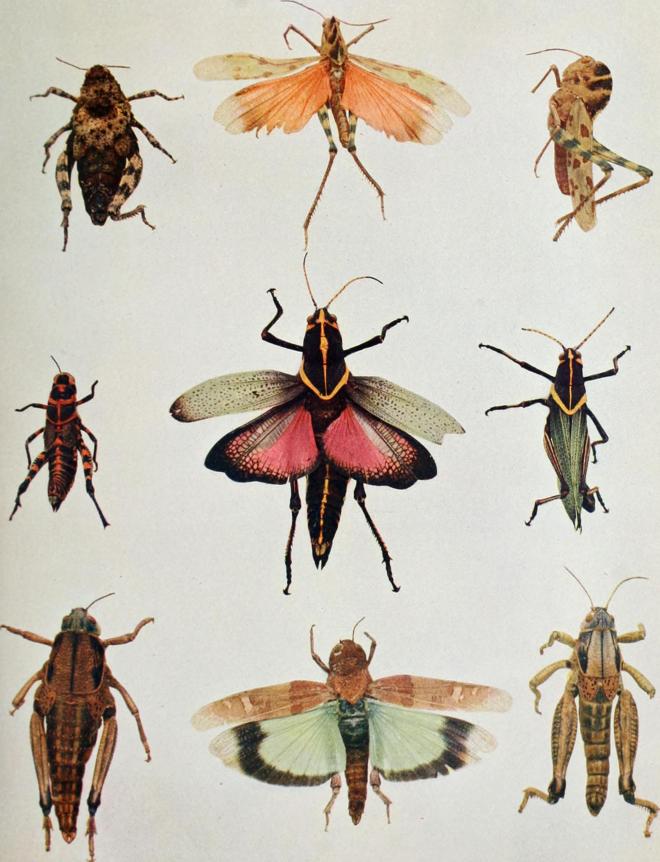 The voracious appetite of grasshoppers and their preference for plants can influence ecosystems in many ways. Certain plants may be favored over others, which affects the diversity and distribution of plant communities. Grasses are a particular favorite, despite being high in hard to digest compounds like lignin, cellulose, and silica. As grasshoppers consume vegetation – up to their body weight per day – digested materials return to the soil where soil dwelling organisms continue to break them down. In this way, grasshoppers and their relatives are major contributors to nutrient cycling. Returning nutrients to the soil results in increased nutrient availability for future plant growth. In fact, one grassland study found that despite short-term losses via grasshopper herbivory, plant growth was enhanced in the long-term due in part to accelerated nutrient cycling.

Because grasshoppers are such prolific consumers, their robust bodies are loaded with nutritious proteins and fats, making them a preferred food source for higher animals. Reptiles, raccoons, skunks, foxes, mice, and numerous species of birds regularly consume grasshoppers and related species. While many adult birds feed mostly on seeds and fruits, they seek out insects and worms to feed their young. Nutrient-packed grasshoppers are an excellent food source for developing birds. Humans in many parts of the world also find grasshoppers and crickets to be a tasty part of their diet.

In short, grasshoppers play prominent roles in plant community composition, soil nutrient cycling, and the food chain. When grasshopper populations reach plague proportions, their impact is felt in other ways. From a human perspective, the damage is largely economic. However, their ability to thoroughly remove vegetation across large areas can be environmentally devastating as well, particularly when it comes to soil erosion and storm water runoff. The USDA’s Agricultural Research Service considers grasshoppers “among the most economically important pests” and cites research estimating that they are responsible for destroying as much as 23% of available range forage in the western United States annually. A paper published in the journal, Psyche, references a period between 2003-2005 in Africa where locusts were responsible for farmers losing as much as 80 to 100% of their crops.

This level of devastation is relatively rare. In Garden Insects of North America, Whitney Cranshaw states that of the more than 550 species of grasshoppers that occur in North America, “only a small number regularly damage gardens…almost all of these are in the genus Melanoplus.” Like most large, diverse groups of organisms, many grasshopper species are abundant and thriving while others are rare and threatened. Human activity has benefited certain species of grasshoppers while jeopardizing others. In general, grasshopper populations vary wildly from year to year depending on a slew of environmental factors.

A plague or outbreak of grasshoppers is a poorly understood phenomenon. It seems there are too many factors at play to pin such an occasion on any one thing. Warm, sunny, dry weather seems to favor grasshopper growth and reproduction, so drought conditions over a period of years can result in a dramatic increase in grasshopper populations. But drought can also limit plant growth, reducing the grasshoppers’ food supply. Natural enemies – which grasshoppers have many – also come into play. It seems that just the right conditions have to be met for an outbreak to occur – a seemingly unlikely scenario, but one that occurs frequently enough to cause concern.

Grasshoppers and fellow orthopterans are fascinating insects, and their place in the world is worth further consideration. For an example of just how compelling such insects can be, here is a story about crickets from Doug Tallamy’s book, Bringing Nature Home:

“Male tree crickets in the genus Oecanthus attempt to lure females to them by making chirping songs with their wings. The loudest male attracts the most females, so males often cheat a bit by positioning themselves within a cup-shaped leaf that amplifies the song beyond what the male can make without acoustical help. Each male chews a hole in the center of his cupped leaf that is just large enough to accommodate his raised wings during chirping. This ensures that the sound projects directly from the center of the parabolic leaf for maximum amplification.