Since Bringing Nature Home by Douglas Tallamy was first published in 2007, it has quickly become somewhat of a “classic” to proponents of native plant gardening. As such a proponent, I figured I ought to put in my two cents. Full disclosure: this is less of a review and more of an outright endorsement. I’m fawning, really, and I’m not ashamed to admit it. 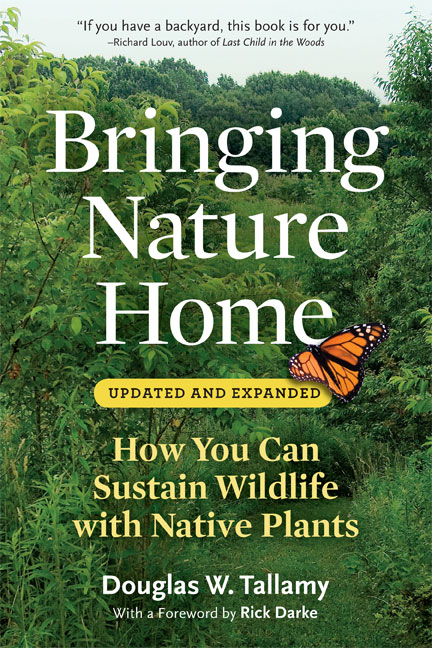 The subtitle pretty much sums it up: “How You Can Sustain Wildlife with Native Plants.” Ninety three pages into the book, Tallamy elaborates further: “By favoring native plants over aliens in the suburban landscape, gardeners can do much to sustain the biodiversity that has been one of this country’s richest assets.” And one of every country’s richest assets, as far as I’m concerned. “But isn’t that why we have nature preserves?” one might ask. “We can no longer rely on natural areas alone to provide food and shelter for biodiversity,” Tallamy asserts in the Q & A portion of his book. Humans have altered every landscape – urban, suburban, rural, and beyond – leaving species of all kinds threatened everywhere. This means that efforts to protect biodiversity must occur everywhere. This is where the You comes in. Each one of us can play a part, no matter how small. In closing, Tallamy claims, “We can each make a difference almost immediately by planting a native nearby.”

A plant is considered native to an area if it shares a historical evolutionary relationship with the other organisms in that area. This evolutionary relationship is important because the interactions among organisms that developed over thousands, even millions, of years are what define a natural community. Thus, as Tallamy argues, “a plant can only function as a true ‘native’ while it is interacting with the community that historically helped shape it.” A garden designed to benefit wildlife and preserve biodiversity is most effective when it includes a high percentage of native plants because other species native to the area are already adapted to using them.

Plants (and algae) are at the base of every food chain – the first trophic level – because they produce their own food using the sun’s energy. Organisms that are primarily herbivores are at the second trophic level, organisms that primarily consume herbivores are at the third trophic level, and so on. As plants have evolved they have developed numerous defenses to keep from being eaten. Herbivores that evolved along with those plants have evolved the ability to overcome those defenses. This is important because if herbivores can’t eat the plants then they can’t survive, and if they don’t survive then there will be little food for organisms at higher trophic levels.

The most important herbivores are insects simply because they are so abundant and diverse and, thus, are a major food source for species at higher trophic levels. The problem is that, as Tallamy learned, “most insect herbivores can only eat plants with which they share an evolutionary history.” Insects are specialized as to which plants they can eat because they have adapted ways to overcome the defenses that said plants have developed to keep things from eating them. Healthy, abundant, and diverse insect populations support biodiversity at higher trophic levels, but such insect populations won’t exist without a diverse community of native plants with which the insects share an evolutionary history.

That is essentially the thesis of Tallamy’s book. In a chapter entitled “Why Can’t Insects Eat Alien Plants?” Tallamy expounds on the specialized relationships between plants and insects that have developed over millennia. Plants introduced from other areas have not formed such relationships and are thus used to a much lesser degree than their native counterparts. Research concerning this topic was scarce at the time this book was published, but among other studies, Tallamy cites preliminary data from a study he carried out on his property. The study compared the insect herbivore biomass and diversity found on four common native plants vs. five common invasive plants. The native plants produced 4 times more herbivore biomass and supported 3.2 times as many herbivore species compared to the invasive plants. He also determined that the insects using the alien plants were generalists, and when he eliminated specialists from the study he still found that natives supported twice as much generalist biomass.

Apart from native plants and insects, Tallamy frames much of his argument around birds. Birds have been greatly impacted by humans. Their populations are shrinking at an alarming rate, and many species are threatened with extinction. Tallamy asserts, “We know most about the effects of habitat loss from studies of birds.” We have destroyed their homes and taken away their food and “filled their world with dangerous obstacles.” Efforts to improve habitat for birds will simultaneously improve habitat for other organisms. Most bird species rely on insects during reproduction in order to feed themselves and their young. Reducing insect populations by filling our landscapes largely with alien plant species threatens the survival of many bird species.

In the chapters “What Should I Plant?” and “What Does Bird Food Look Like?,” Tallamy first profiles 20 groups of native trees and shrubs that excel at supporting populations of native arthropods and then describes a whole host of arthropods and arthropod predators that birds love to eat. Tallamy’s fascinating descriptions of the insects, their life cycles, and their behaviors alone make this book worth reading. Other chapters that are well worth a look are “Who Cares about Biodiversity?” in which Tallamy explains why biodiversity is so essential for life on Earth, and “The Cost of Using Alien Ornamentals” in which Tallamy outlines a number of ways that our obsession with exotic plants has caused problems for us and for natural areas. 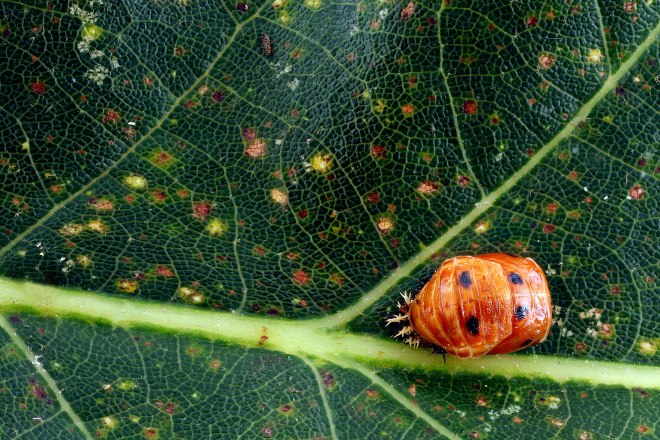 Pupa of a ladybird beetle on a white oak leaf. “The value of oaks for supporting both vertebrate and invertebrate wildlife cannot be overstated.” – Doug Tallamy (photo credit: wikimedia commons)

Convincing people to switch to using native plants isn’t always easy, especially if your argument involves providing habitat for larger and more diverse populations of insects. For those who are not fans of insects, Tallamy explains that “a mere 1%” of the 4 million insect species on Earth “interact with humans in negative ways.” The majority are not pests. It is also important to understand that even humans “need healthy insect populations to ensure our own survival.” Tallamy also offers some suggestions on how to design and manage an appealing garden using native plants. A more recent book Tallamy co-authored with fellow native plant gardening advocate Rick Darke called The Living Landscape expands on this theme, although neither book claims to be a how to guide.

Interested in writing a book review for Awkward Botany? Or helping out in another way? Find out how.