The names of plants often contain clues that can either help with identification or that tell something about the plant’s history or use. The name, catalpa, is said to be derived from the Muscogee word, katałpa, meaning “winged head,” presumably referring to the tree’s winged seeds. Or maybe, as one writer speculates, it refers to the large, heart-shaped, floppy leaves that can make it look like the tree is “ready to take flight.” Or perhaps it’s a reference to the fluted, fused petals of the tree’s large, tubular flowers. I suppose it could mean any number of things, but I’m sticking with its seeds, which are packed by the dozens in the tree’s long, slender, bean-like fruits. The seeds are flat, pale brown, and equipped with paper thin, fringed appendages on either side that assist in wind dispersal – wings, in other words. 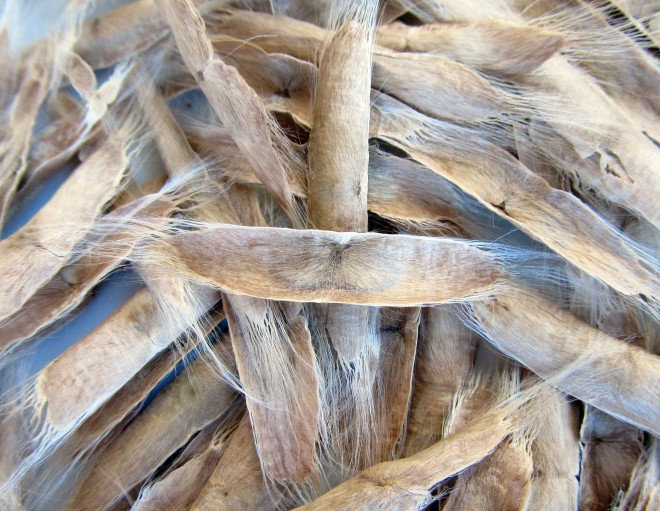 Catalpa speciosa, or northern catalpa, is a relatively fast growing, short-lived tree native to the Midwest and one of only two species in the genus Catalpa found in the United States. Its distribution prior to the arrival of Europeans appears to have been restricted to a portion of the central Mississippi River valley, extending west into Arkansas, east into Tennessee, and north into Illinois and Indiana. It has since been widely planted outside of its native range, naturalizing in areas across the Midwest and eastern US. Early colonizers planted northern catalpa for use as fence posts, railroad ties, and firewood. Its popularity as an ornamental tree is not what it once was a century ago, but it is still occasionally planted in urban areas as a shade tree. Its messiness – littering the ground below with large leaves, flowers, and seed capsules – and its tendency to spread outside of cultivation into natural areas are reasons why it has fallen out of favor with some people.

The oval to heart-shaped, 8 to 12 inch long leaves with long petioles rotting on the ground below the tree are one sure sign that you’ve encountered a catalpa in the winter time. The leaves are some of the first to fall at the end of the growing season, briefly turning an unmemorable yellow before dropping. 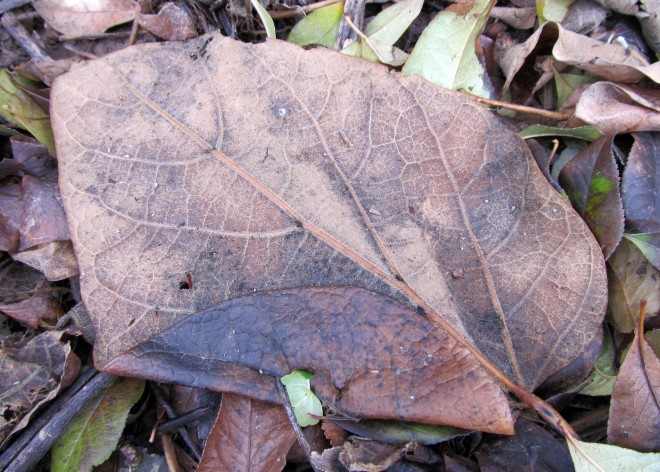 The leaf arrangement on northern catalpa is whorled and sometimes opposite. The twigs are easy to identify due to several unique features. They are stout, round, and grayish brown with prominent lenticels. The leaf scars are large, rounded, and raised up on the twig, looking a bit like little suction cups. They are arranged in whorls of three, with one scar considerably smaller than the other two. A series of bundle traces inside the scar form an ellipse. The leaf buds are tiny compared to the scar and are protected by loose, pointed, brown bud scales. Northern catalpa twigs lack a terminal bud. In the winter, seed capsules or the stalk of an old inflorescence often remain attached to the terminal end of the twig. The pith inside of the twig is thick, white, and solid. 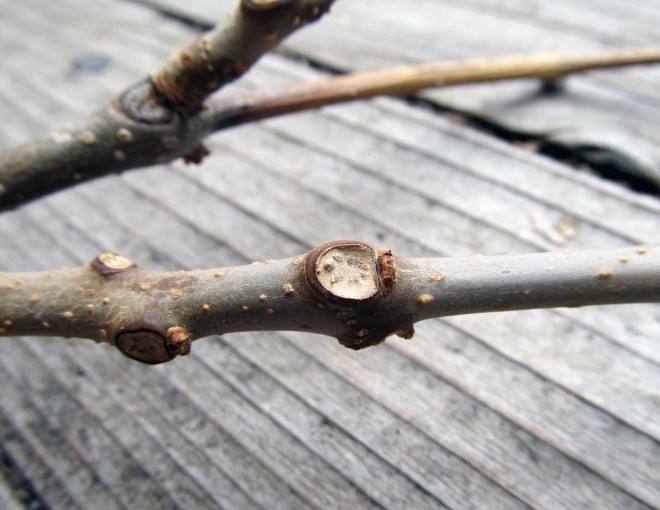 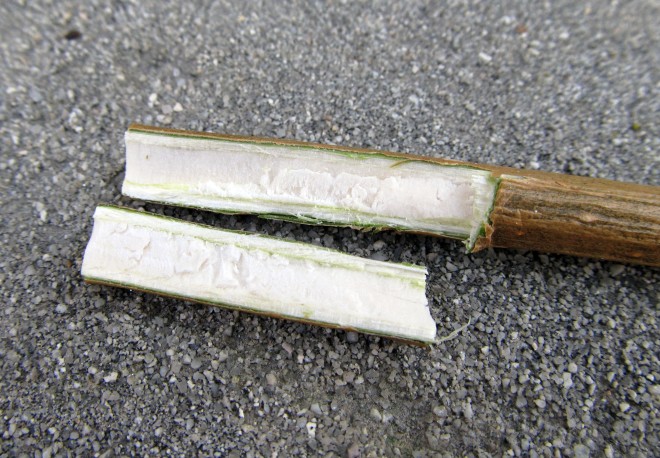 Another common name for Catalpa speciosa is cigar tree, a name that comes from its up to 18 inch long, cigar-like seed capsules that hang from the otherwise naked tree throughout the winter. The sturdy, cylindrical pod starts out green in the summer and turns dark brown by late fall. Seed pods that haven’t fallen or already split open will dehisce in the spring time, releasing their papery seeds to the wind. 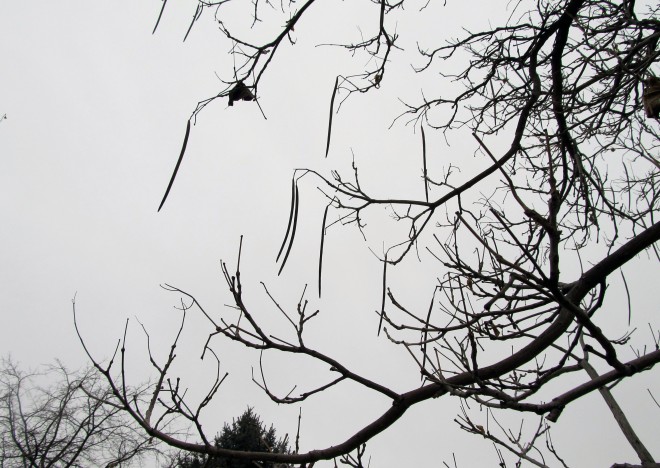 The young bark of northern catalpa is thin and easily damaged. As it matures, it becomes furrowed with either scaly ridges or blocky plates. Mature trees are generally twisted at the base but otherwise grow straight, reaching 30 to 60 feet tall (sometimes taller) with an open-rounded to narrow-oval crown. 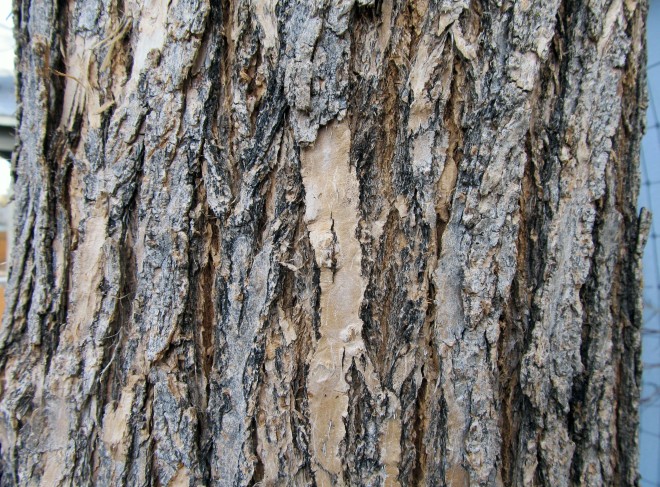 Northern catalpa is one of the last trees to leaf out in the spring. In late spring or early summer, 10 inch long clusters of white, tubular flowers are produced at the tips of stems. Before the flowers open, they look a bit like popped popcorn, reminding me of a song from my childhood (which I will reluctantly leave right here). The margins of its trumpet-shaped petals are ruffled and there is yellow, orange, and/or purple spotting or streaking on the inside of the tubes. 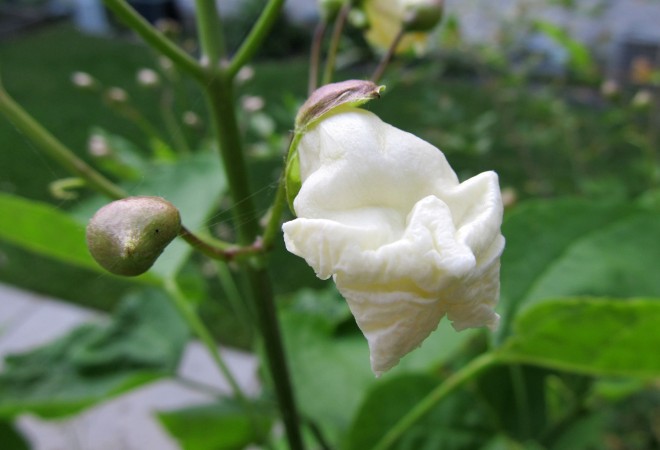 flower of northern catalpa (Catalpa speciosa) just before it opens