Urban areas bear little resemblance to the natural areas that once stood in their place. Concrete and asphalt stretch out for miles, buildings of all types tower above trees and shrubs, and turfgrass appears to dominate whatever open space there is. Understandably, it may be hard to imagine places like this being havens for biodiversity. In many ways they are not, but for certain forms of life they can be.

An essay published earlier this year in Conservation Biology highlights the ways in which cities “can become a refuge for insect pollinators.” In fact, urban areas may be more inviting than their rural surroundings, which are often dominated by industrial agriculture where pesticides are regularly used, the ground is routinely disturbed, and monocultures reign supreme. Even though suitable habitat can be patchy and unpredictable in the built environment, cities may have more to offer than we once thought.

Yet, studies about bee abundance and diversity in urban areas show mixed results, largely because all bee species are not created equal (they have varying habitat requirements and life histories) and because urban areas differ wildly in the quality and quantity of habitat they provide both spatially and temporally. For this reason, it is important for studies to focus on groups of bees with similar traits and to observe them across various states of urbanization. This is precisely what researchers at University of Michigan set out to do when they sampled bumblebee populations in various cities in southeastern Michigan. Their results were published earlier this year by Royal Society Open Science.

The researchers selected 30 sites located in Dexter, Ann Arbor, Ypsilanti, Dearborn, and Detroit. Most of the sites were gardens or farms in urban centers. They collected bumblebees from May to September using pan traps and nets. The species and sex of each individual bumblebee was identified and recorded for each site. The percentage of impervious surface that surrounded each site was used as a measurement of urban development. Other measurements included the abundance of flowers and average daily temperatures for each location.

Bumblebees were selected as a study organism because the genus, Bombus, “represents a distinct, well-studied set of traits that make it feasible to incorporate natural history into analysis.” Bumblebees live in colonies – eusocial structures that include “a single reproductive queen, variable numbers of non-reproductive female workers, and male reproductive drones.” They are generalist foragers, visiting a wide variety of flowering species for pollen and nectar, and they nest in holes in the ground, inside tree stumps, or at the bases of large clumps of grass. The authors believe that their nesting behavior makes them “a good candidate for testing the effects of urban land development,” and the fact that members of the colony have “distinct roles, [behaviors], and movement patterns” allows researchers to make inferences regarding “the effects of urbanization on specific components of bumblebee dynamics.” 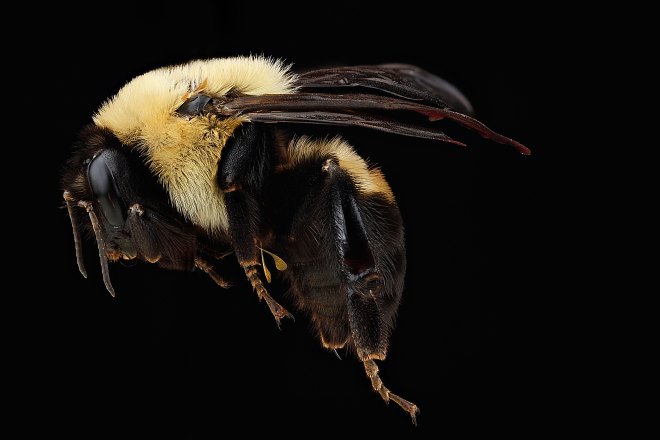 Because bumblebees are strong fliers with an extensive foraging range, impervious surface calculations for each site had to cover an area large enough to reflect this. Results indicated that as the percentage of impervious surfaces increased, bumblebee abundance and diversity declined. When male and female bumblebee data was analyzed separately, the decline was only seen in females; males were unaffected.

Female workers do most of their foraging close to home, whereas males venture further out. The researchers found it “reasonable to hypothesize that worker abundance is proportional to bumblebee colony density.” Thus, the decline in female bumblebees observed in this study suggests that as urban development increases (i.e. percent coverage of impervious surface), available nesting sites decline and the number of viable bumblebee colonies shrinks. Because male bumblebees responded differently to this trend, future studies should consider the responses of both sexes in order to get a more complete picture of the effects that urbanization has on this genus.

Interestingly, results obtained from the study locations in Detroit did not conform to the results found elsewhere. Bumblebee abundance and diversity was not decreasing with urbanization. Unlike other cities in the study, “Detroit has experienced decades of economic hardship and declining human populations.” It has a high proportion of impervious surfaces, but it also has an abundance of vacant lots and abandoned yards. These areas are left unmaintained and are less likely to be mowed regularly or treated with pesticides. Reducing disturbance can create more suitable habitat for bumblebees, resulting in healthy populations regardless of the level of urbanization. Thus, future studies should examine the state of insect pollinators in all types of cities – shrinking and non-shrinking – and should consider not just the amount of available habitat but also its suitability.