For a little over a year now, I’ve been doing a tiny radio show with a friend of mine named Casey O’leary. The show is called Boise Biophilia and airs weekly on Radio Boise. On the show we each take about a minute to talk about something biology or ecology related that listeners in our local area can relate to. Our goal is to encourage listeners to get outside and explore the natural world. It’s fascinating after all! After the shows air, I post them on our website and Soundcloud page for all to hear.

We are not professional broadcasters by any means. Heck, I’m not a huge fan of talking in general, much less when a microphone is involved and a recording is being made. But Casey and I both love spreading the word about nerdy nature topics, and Casey’s enthusiasm for the project helps keep me involved. We’ve recorded nearly 70 episodes so far and are thrilled to know that they are out there in the world for people to experience. What follows is a sampling of some of the episodes we have recorded over the last 16 months. Some of our topics and comments are inside baseball for people living in the Treasure Valley, but there’s plenty there for outsiders to enjoy as well.

Something you will surely note upon your first listen is the scattering of interesting sound effects and off the wall edits in each of the episodes. Those come thanks to Speedy of Radio Boise who helps us edit our show. Without Speedy, the show wouldn’t be nearly as fun to listen to, so we are grateful for the work he does.

In this episode, Casey and I explore the world of leaf litter. Where do all the leaves go after they fall? Who are the players involved in decomposition, and what are they up to out there?

In this episode, Casey gets into our region’s complicated system of water rights, while I dive into something equally complex and intense – life inside of a sagebrush gall.

In this episode, I talk about dead bees and other insects trapped and dangling from milkweed flowers, and Casey discusses goatheads (a.k.a. puncture vine or Tribulus terrestris) in honor of Boise’s nascent summer celebration, Goathead Fest.

As much as I love plants, I have to admit that some of our best episodes are insect themed. Their lives are so dramatic, and this episode illustrates that.

The insect drama continues in this episode in which I describe how ant lions capture and consume their prey. Since we recorded this around Halloween, Casey offers a particularly spooky bit about garlic.

If you follow Awkward Botany, you know that one of my favorite topics is weeds. In this episode, I cover tumbleweeds, an iconic western weed that has been known to do some real damage. Casey introduces us to Canada geese, which are similar to weeds in their, at times, overabundance and ability to spawn strong opinions in the people they share space with.

In this episode, I explain the phenomenon of marcescence, and Casey gives some great advice about growing onions from seed.

And finally, in the spring you can’t get by without talking about bulbs at some point. This episode is an introduction to geophytes. Casey breaks down the basics, while I list some specific geophytes native to our Boise Foothills.

Humans have been at war with rats since time immemorial. Ridding ourselves of their nuisance behavior is increasingly unlikely, and in fact, some scientists believe that, following human extinction, rats will be poised to take our place as the most dominant species on earth. Despite being thwarted repeatedly, we make tireless attempts to control rat populations. One major weapon in our arsenal is poison, and one of the most popular rat poisons was derived from a plant with a formidable bulb.

Urginea maritima (known synonymously as Drimia maritima, among other Latin names) is a geophyte native to the Mediterranean Basin, where it survives the hot, dry summer months by going dormant, waiting things out underground. Growth occurs in the cooler months, its bulb expanding annually before it finally flowers late one year after reaching at least 6 years old. Its flower stalk rises to as tall as 2 meters, extending heavenward from a bulb that can weigh as much as a kilogram. Its inflorescence is long, narrow, and loaded with small flowers that are generally white, but sometimes pink or red.

The oversized bulb of Urginea maritima — via wikimedia commons

Urginea maritima is commonly known as red squill or white squill (and sometimes simply, squill). Other common names include sea onion, sea squill, and giant squill. It is related the squill referred to in the Harry Potter universe, which is known botanically as Scilla. However, plants in the genus Scilla are much more dimunutive and generally flower in the spring rather than the fall. Like red squill, Scilla species are known to be poisonous; however, they don’t have the reputation for producing deadly rat poison that red squill does.

Like so many poisonous plants, red squill has a long history of being used medicinally to treat all sorts of ailments. As with any folk remedy or natural medicine, a doctor should be consulted before attempting to treat oneself or others. A 1995 report tells of a woman who ate red squill bulbs to treat her arthritic pain. She exhibited symptoms characteristic of ingesting cardiac glycosides – the toxic compound found in red squill – including nausea, vomiting, and seizures. She died 30 hours after eating the bulbs. 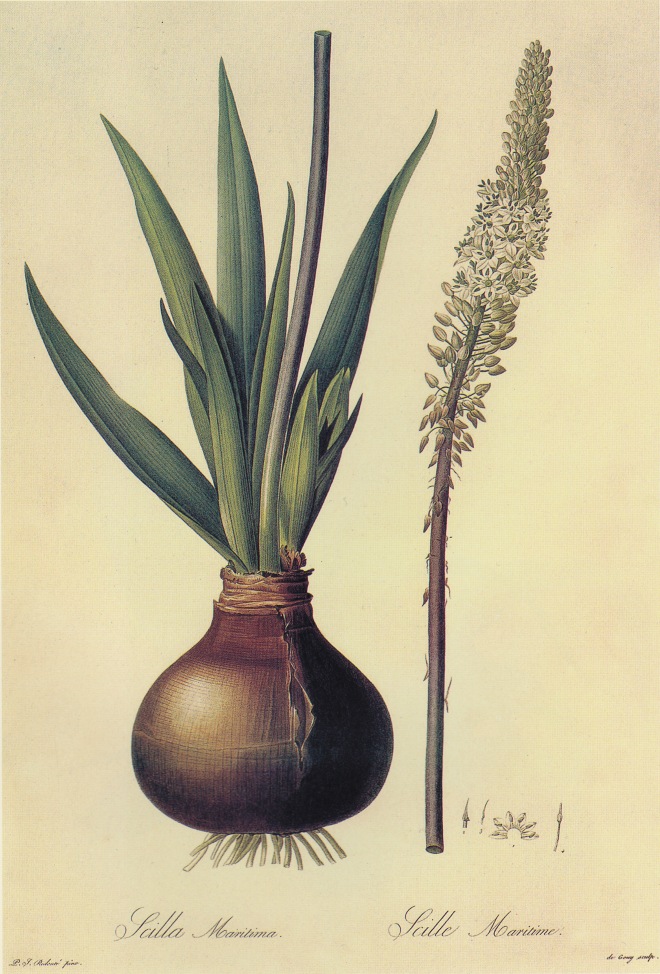 Toxic compounds are found throughout the plant, but are particularly concentrated in the bulb (especially its core) and the roots. Toxicity is at its highest during summer dormancy and when the plant is flowering and fruiting. The compound used to poison rats is called scilliroside. Bulbs are harvested in the summer, chopped up, and dried. The chips are then ground down to a powder and added to rat bait. Results are highly variable, so to increase its effectiveness, a concentrate can be made by isolating the toxic compound using solvents.

Red squill was introduced to southern California in the 1940’s as a potential agricultural crop. The region’s Mediterranean climate and the plant’s drought tolerance made it ideal for the area. The bulbs can be grown for manufacturing rat poison, and the flowers harvested for the cut flower industry. Breeding efforts have been made to produce highly toxic varieties of red squill for rat poison production. 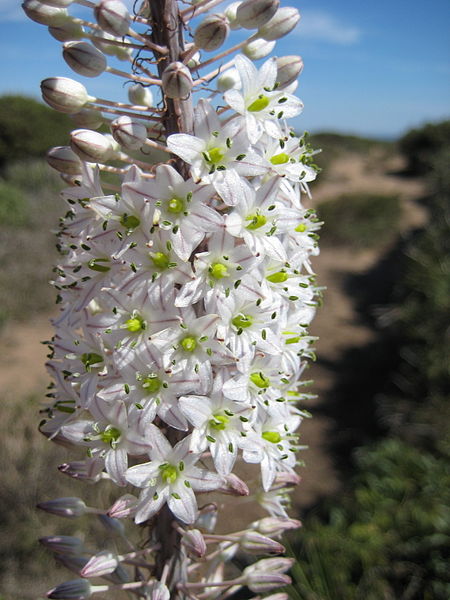 the flowers of red squill (Urginea maritima) — via wikimedia commons

Around the time red squill was being evaluated as an agricultural crop, studies were done not only on its toxicity to rats, but to other animals as well. A 1949 article details trials of a red squill derived poison called Silmurine. It was fed to rats as well as a selection of farm animals.  Results of the study where “not wholly satisfactory” when it came to poisoning rats. Silmurine was less effective on Rattus rattus than it was on Rattus norvegicus. Thankfully, however, it was found to be relatively safe for the domestic animals it was administered to. Most puked it up or avoided it. Two humans accidentally became part of the study when they inadvertently inhaled the poison powder. Ten hours later they experienced headaches, vomiting, and diarrhea, “followed by lethargy and loss of appetite,” but “no prolonged effects.”

Vomiting is key. Ingesting scilliroside induces vomiting, which helps expel the poison. However, rodents can’t vomit (surprisingly), which is why the poison is generally effective on them.

Today, squill is available as an ornamental plant for the adventurous gardener. For more about that, check out this video featuring a squill farmer: