For all the benefits that plants offer humanity – the distillation being that Earth would be uninhabitable without them – there is still reason to be wary of them. In a world lousy with herbivores, plant species that are unpalatable have a greater chance of survival. Inflicting serious injury or death upon being ingested – or even by coming in contact with an unsuspecting visitor – offers even greater assurance that a plant will survive long enough to reproduce, passing along to its progeny any traits that led to its superior fitness. The traits in this case are chemical compounds that can be toxic when delivered at the right dose to the right organism. This is the nature of poisonous plants, and the reason why from a young age we were all likely warned not to eat every tasty looking berry we come across and not to go tromping carelessly through an area where certain plants might be present. Plants aren’t out to get us per se, but some do have the potential to cause us great harm. Informing ourselves and taking precautions is advised.

This is the first in a series of posts about poisonous plants. The list of poisonous plants is long, so it’s going to take a while to get through them all. There are some plants that are not generally considered poisonous but can cause illness or death to those who are allergic to them – like peanuts. I don’t plan to include such plants, but there may be some exceptions along the way. The popular author Amy Stewart wrote a book about poisonous and other nefarious plants entitled, Wicked Plants: The Weed that Killed Lincoln’s Mother and other Botanical Atrocities. Below is an excerpt from her introduction to that book that I thought would be worth including here:

Do not experiment with unfamiliar plants or take a plant’s power lightly. Wear gloves in the garden; think twice before swallowing a berry on the trail or throwing a root into a stew pot. If you have small children, teach them not to put plants in their mouths. If you have pets, remove the temptation of poisonous plants from their environment. The nursery industry is woefully lax about identifying poisonous plants; let your garden center know that you’d like to see sensible, accurate labeling of plants that could harm you. Use reliable sources to identify poisonous, medicinal, and edible plants. (A great deal of misinformation circulates on the Internet, with tragic consequences.)

“Bane” is defined as deadly poison or a person or thing that causes death, destruction, misery, distress, or ruin. The word seems fitting as a common name to describe a plant with a berry that when ingested is said to have an almost immediate sedative effect on the heart and can ultimately lead to cardiac arrest. Baneberry is a name given to several plants in the genus Actaea, two of which are the main focus of this post – red baneberry (Actaea rubra) and white baneberry (Actaea pachypoda).

Actaea is in the family Ranunculaceae – the buttercup family – a family that consists of several common ornamental plants including those in the genera Ranunculus, Delphinium, and Clematis. A. rubra and A. pachypoda are commonly found in the understory of wooded areas in North America – A. rubra is the most widespread of the two species, occurring throughout North America except Mexico and the southeastern U.S. states; A. pachypoda occurs in eastern Canada and most eastern and Midwestern U.S. states.

Red baneberry is an herbaceous perennial that emerges in the spring from a basal stem structure called a caudex or from a rhizome, dying back to the ground again in the fall. One or several branching stems reach from 1 to 3 feet high, each with compound leaves consisting of 2-3 leaflets. The leaflets are deeply lobed and coarsely toothed. Several small, white flowers appear in spring to early summer clustered together in an inflorescence called a raceme. The petals are inconspicuous, but the stamens are large and showy. The flowers are said to have a rose-like scent. A variety of insects pollinate the flowers, after which green berries form, turning red or occasionally white by mid to late summer. 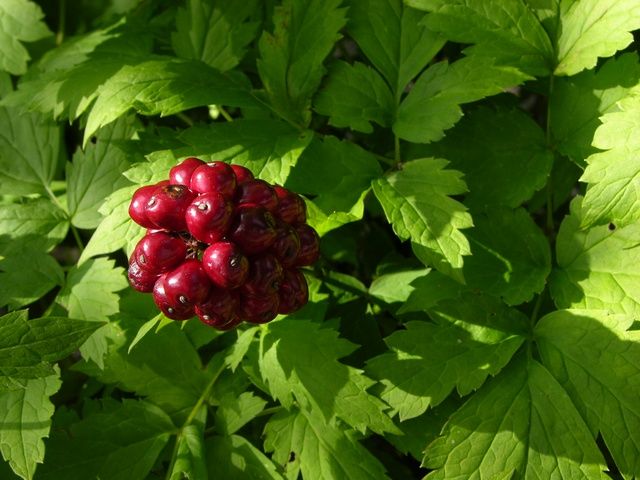 Red baneberry occurs on diverse soil types and in diverse ecosystems across its expansive native range. It seems to prefer, moist, shady, nutrient rich, acidic sites, and is considered an indicator of such places. It can be found in deciduous, coniferous, and mixed forested areas. Its preference for moist sites means that it can also be found in swamps, along stream banks, and in other riparian areas.

White baneberry has a relatively smaller native range and is found in very similar environments. It also has many of the same features and habits as red baneberry, with the main distinction being its striking white berries formed on prominent, stout, bright red axes and peduncles (the “stems” and “branches” of the racemes). The stigmas are persistent on the berries, forming large black dots on each berry and giving it another common name, doll’s eyes. This is a feature of red baneberry as well, but is much more striking on the white berries.

Baneberry is occasionally browsed by livestock and wildlife including deer, elk, and small mammals. However, it has a low degree of palatability and isn’t very nutritious. Birds, unaffected by their poisonous qualities, eat the berries and are the main seed dispersers of baneberry. 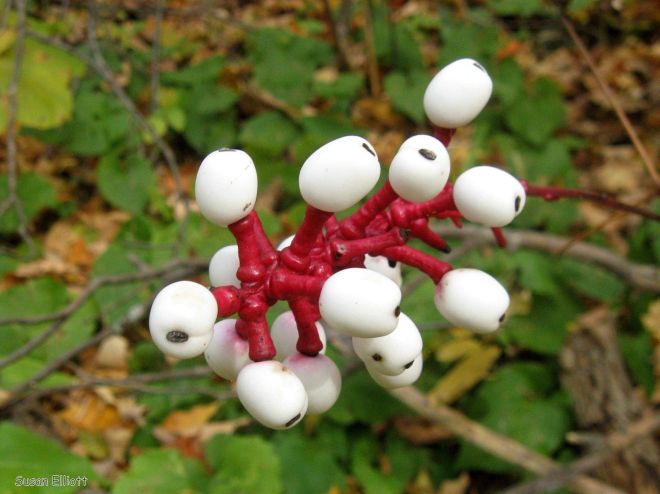 The roots and berries are the most poisonous parts of baneberry, however all parts are toxic. The berries are quite bitter, so it is not likely that one would eat enough of them to receive a severe reaction. If ingested, symptoms include stomach cramps, dizziness, vomiting, diarrhea, delirium, and circulatory failure. Eating six or more berries can result in respiratory distress and cardiac arrest. The toxin in the plant has yet to be clearly identified. Protoanemonin is present, as it is in all plants in the buttercup family, but the real toxicity of the plant is probably due to an essential oil or a poisonous glycoside. There have been no reported deaths due to the consumption of red or white baneberry, but a European species of baneberry (A. spicata) has been linked to the death of several children.

Native Americans were aware of baneberry’s toxicity, so rather than use it as a food source, they used it medicinally. Among other things, the root was used as a treatment for menstrual cramps, postpartum pain, and issues related to menopause, and the berry was used to induce vomiting and diarrhea and as a treatment for snakebites. Leaves were chewed and applied to boils and wounds. Two websites I visited claimed that arrowheads were dipped in the juice of the berries to make poison arrows. Neither cited a reference, and in the section on arrow poisons in Wicked Plants, Stewart doesn’t mention baneberry. However, that doesn’t mean it didn’t happen. 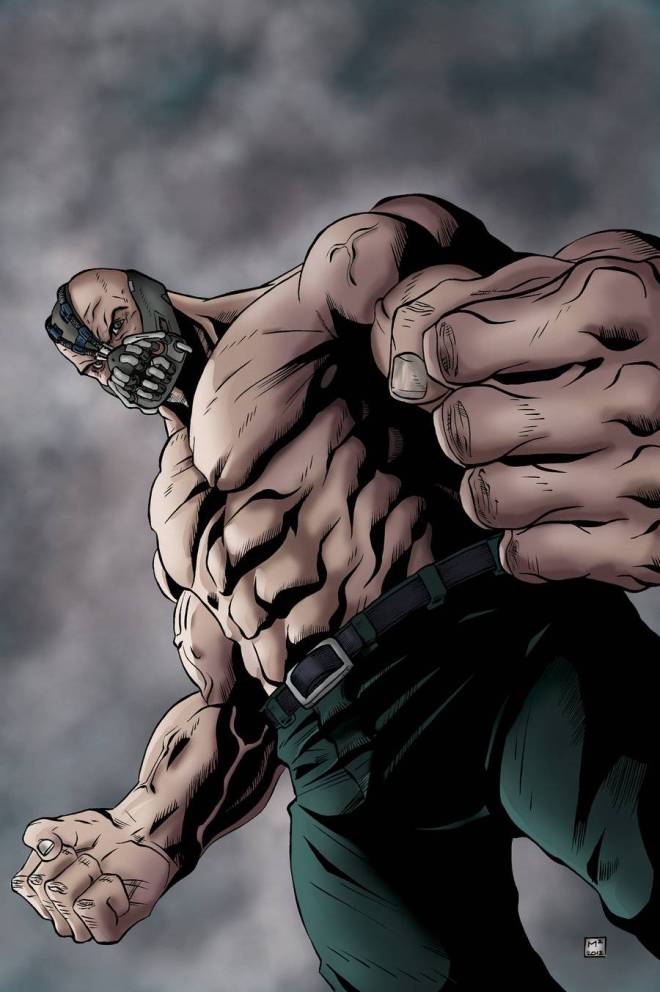 What do you fear the most? Batman villian, Bane, or baneberry? (photo credit: Comic Vine)