This is the seventh in a series of posts reviewing the 17 articles found in the October 2014 Special Issue of American Journal of Botany, Speaking of Food: Connecting Basic and Applied Science.

Doubling Down on Genomes: Polyploidy and Crop Plants by Simon Renny-Byfield and Jonathan F. Wendel

This is another fascinating but dense article about genetics. The major theme, as the title suggests, is polyploidy and its role in crop domestication and future crop improvements – a sub-theme being that by studying polyploidy in crop plants, we can gain insights into polyploidy generally as it relates to non-crop plants. Polyploidy – or whole genome duplication – is “where an organism possesses more than a diploid complement of chromosomes.” Typically, chromosomes come in sets of two, one set from each parent. Organisms with this type of an arrangement are called diploids. Polyploids are organisms with more than two sets of chromosomes. In general terms, this can occur as a result of two species hybridizing (interspecific hybridization), which is called allopolyploidy, or it can occur as a result of spontaneous genome doubling in a single species, which is called autopolyploidy. This article deals mainly with allopolyploid as polyploidy in crop plants is largely a result of hybridization.

Much of what we know about polyploidy has been discovered relatively recently during what is referred to as the “genomics era.” Traditionally, identifying polyploids was done by examining the number of chromosomes in a cell. Today, technological advances such as next generation sequencing have brought new insights into polyploidy and allowed us to identify evidence of it in organisms that cannot be observed simply by counting chromosomes. Plants that are now considered diploids went through periods of whole genome duplication in the distant past; however, due to genome downsizing and other events, they present themselves as diploids. This historical polyploidy is called paleopolyploidy. Evidence now suggests that all seed plants and flowering plants (angiosperms) are “rightly considered to have a paleopolyploidy ancestry.”

As I did with past articles that were very genetics heavy, I will use the bullet point method to list some of the main things that I learned from the article rather than offering a full review. As with any article that I review, my goal is to present the information in a digestible manner for as wide of an audience as possible without misrepresenting or oversimplifying the science and the research. This seems to be one of the main struggles faced by all who write about science for a general audience – a topic to be explored another time, perhaps. 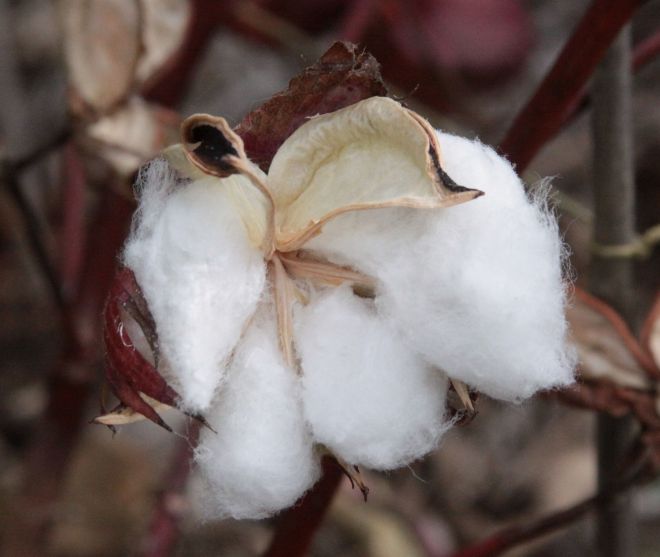 Upland cotton (Gossypium hirsutum) is the most widely cultivated species of cotton in the United States. It is an allopolyploid, and it produces fibers that are “considerably longer, stronger, and whiter than are possible to obtain from any diploid.” (photo credit: www.eol.org)

This is the fifth in a series of posts reviewing the 17 articles found in the October 2014 Special Issue of American Journal of Botany, Speaking of Food: Connecting Basic and Applied Science.

As expected, some of the articles in this issue get into pretty deep discussions about genetics and phylogenetics. Advancements in sequencing and analyzing DNA have not only led to better understanding of genes and their functions but have also given us greater insight into how species are related and their proper place on the phylogenetic tree.  While I have some background in these things and can follow along at a basic level, I certainly don’t feel confident in authoritatively summarizing such findings . I also question whether or not a high level discussion of phylogenetics makes for an interesting and engaging blog post. Plant systematics geeks are aggressively nodding “yes”; other readers’ eyes have glazed over by this point.

I am certainly not arguing that this is not important stuff. When a species we have become familiar with is suddenly given a new scientific name, it is not too annoy those of us who are trying to learn the names of things, rather it is because something novel has been discovered about the way living things are organized, about their life history – the way they came to be.  We should be celebrating advancements that allow us to look back over the millions of years of life on earth and see how various species emerged, evolved, disappeared, were replaced, and ultimately arrived at what we view today. And we should be humbled to know that these present forms are not the climax, that we are simply getting a glimpse in the evolutionary trajectory of the organisms around us. Perhaps it will prompt us to protect them, understanding that every scrap of biodiversity is important and worth conserving. After all, who are we to decide how the story goes?

The sixth and seventh articles in “Speaking of Food” are about carrots and strawberries respectively. Discussion about the genetics and phylogenetics of these plants dominates the articles, with the application being that we can improve these crops by better understanding their genetics, and we can gain insights into plant evolution by better understanding their phylogenetics.  Rather than give you a thorough overview of each of these articles (for reasons stated above), I am offering you bullet points of a few of the things that I learned while reading them.

Fragaria: A Genus with Deep Historical Roots and Ripe for Evolutionary and Ecological Insights by Aaron Liston, Richard Cronn, and Tia-Lynn Ashman 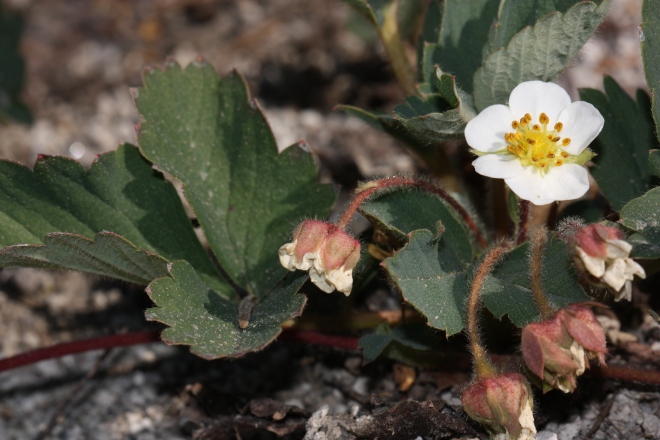 This is the fourth in a series of posts reviewing the 17 articles found in the October 2014 Special Issue of American Journal of Botany, Speaking of Food: Connecting Basic and Applied Science.

Safflower (Carthamus tinctorius) was first domesticated in the Fertile Crescent about 4,500 years ago. It was originally desired for its flowers which were used in dye making. Commercial production of safflower began in North America in the 1950’s, where it is now mainly grown for its seeds which are used to produce oil for human consumption and are a main ingredient in bird seed mixes. Despite this, it is categorized as an “underutilized crop,” one “whose genetic potential has not been fully realized.” With increased interest in food security and feeding a growing population, researchers are turning to new and underutilized crops in order to increase the “availability of a diverse assemblage of crop species.”

A major step in improving a crop plant is understanding the genetic diversity that is available within its gene pool. With this aim in mind, researchers observed a “broad cross section of the safflower gene pool” by examining the DNA of a “worldwide sampling of diversity from the USDA germplasm collection [134 accessions consisting of 96 from the Old World and 38 from the New World]”, 48 lines from two major commercial safflower breeding programs in North America, and 8 wild collected safflower individuals. 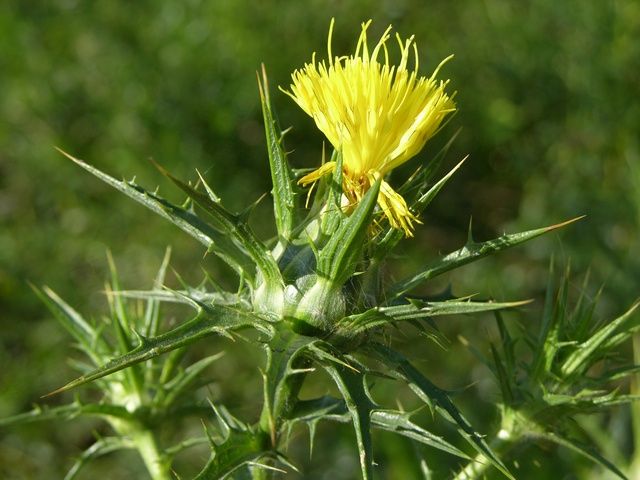 Researchers found that the cultivated safflower varieties had a significant reduction in genetic diversity compared to the wild safflower plants. They also noted that the 96 Old World accessions could be grouped into “four clusters that corresponded to four different geographic regions that presumably represent somewhat distinct breeding pools.” They found that the wild safflowers “shared the greatest similarity with the Iran-Afghanistan-Turkey cluster” from the Old World group of accessions, a finding that “is consistent with safflower’s presumed Near Eastern center of origin.”

The researchers determined that there may be “agronomically favorable alleles present in wild safflowers,” and that “expanded efforts to access wild genetic diversity would facilitate the continued improvement of safflower.” Safflower is an important but underused oilseed crop that is adapted to dry climates; studies like this one that can lead to further crop improvements may help bring it out of niche production and into more widespread use.

Soybean production is a major money maker in the United States ($43 billion total revenue in 2012); corn is the only crop that tops it. Soybean oil has myriad uses from food to feedstock and from pharmaceuticals to biofuel. As much as 57% of the world’s seed oil comes from soybeans produced in the United States. Hence, soybean (Glycine max and its wild progenitor, G. soja) is a well researched crop. Most research has been focused on the two annual species in the subgenus Soja; “less well known are the perennial wild relatives of soybean native to Australia, a diverse and interesting group that has been the focus of research in several laboratories.”

Given the agricultural importance of soybean and the increasing demands that will be placed on this crop as population rises, it is imperative that improvements continue to be made. Exploring soybean’s “extended gene pool,” including both its annual “brother” and its perennial “cousins,” will aid in making these improvements. 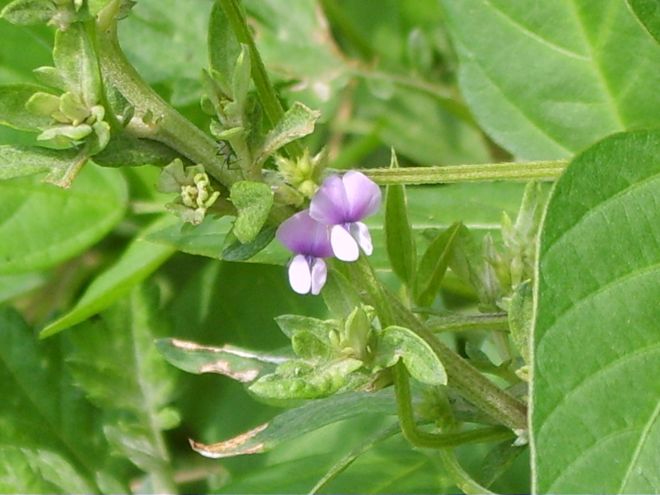 Perennial soybeans in the subgenus Glycine include around 30 species. They are adapted to a wide variety of habitats “including desert, sandy beaches, rocky outcrops, and monsoonal, temperate, and subtropical forests.” They are of particular interest to researchers because several of them are allopolyploids, meaning that they have more than the usual two sets of chromosomes and that the additional sets of chromosomes were derived from different species. The authors state that “the distributional differences between diploids and independently formed polyploids [in the subgenus Glycine] suggests underlying ecological, physiological, and molecular differences related to genome doubling and has led to the development of the group as a model for studying allopolyploidy.” The group is also worth studying because they demonstrate resistance to various soybean pathogens and are adapted to a variety of environmental conditions.

By continuing to work with soybean’s perennial cousins to gain a better understanding of “polyploidy and legume evolution,” the authors hope to apply their research to achieve increases in soybean yields. Past research suggests that the study of polyploidy in the perennial soybeans could lead to crop improvements in areas such as photosynthesis, nitrogen fixation, flowering time, and disease resistance.