“Seeds are travelers in space and time – small packages of DNA, protein, and starch that can move over long distances and remain viable for hundreds of years. These packages have everything they need not only to survive, but also to grow into a plant when they encounter the right conditions.”      — The Book of Seeds by Paul Smith

As illustrated in last week’s post, the mature seeds of dicots – depending on the species – can be either with or without endosperm (a starchy food packet that feeds a growing seedling upon germination). Seeds without endosperm store these essential sugars in their cotyledons. Monocotyledons (or monocots, for short) are a group of flowering plants (i.e. angiosperms) whose seedlings are composed of a single cotyledon. With the exception of orchids, the seeds of monocots always contain endosperm.

The first of two examples of monocot seeds is the common onion (Allium cepa). The embryo in this seed sits curled up, surrounded by endosperm inside of a durable seed coat. 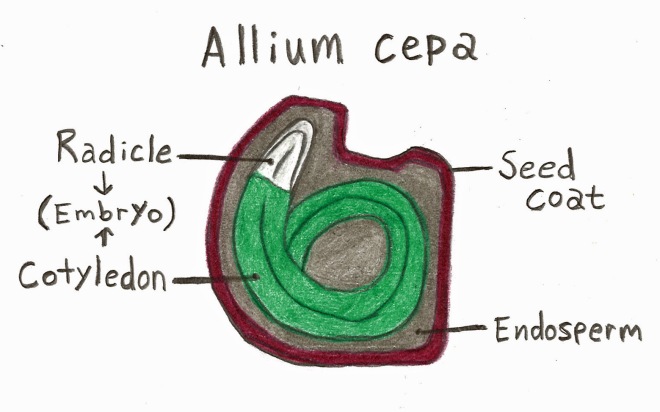 If you have ever sown onion seeds, you have watched as the single, grass-like cotyledon emerges from the soil. The seed coat often remains attached to the tip of the cotyledon like a little helmet as it stretches out towards the sky. Soon the first true leaf appears, pushing out from the base of the cotyledon. The source of this first leaf is the plumule hidden within the cotyledon. 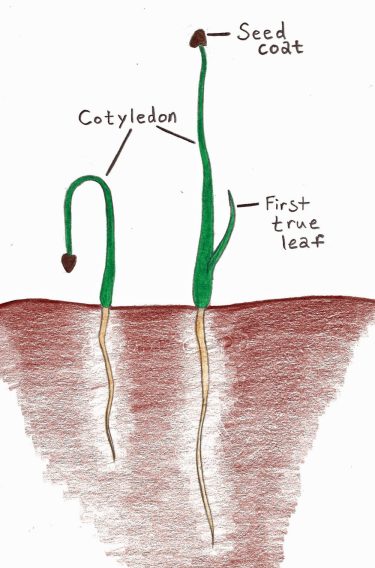 The fruit of plants in the grass family – including cereal grains like wheat, oats, barley, rice, and corn – is called a caryopsis. In this type of fruit, the fruit wall (or pericarp) is fused to the seed coat, making the fruit indistinguishable from the seed. The embryos in these seeds are highly developed, with a few more discernible parts. A simplified diagram of a corn seed (Zea mays) is shown below. Each kernel of corn on a cob is a caryopsis. These relatively large seeds are great for demonstrating the anatomy of seeds in the grass family.

In these seeds there is an additional layer of endosperm called aleurone, which is rich in protein and composed of living cells. The cells of the adjacent endosperm are not alive and are composed of starch. The embryo consists of several parts, including the cotyledon (which, in the grass family, is also called a scuttelum), coleoptile, plumule, radicle, and coleorhiza. The coleoptile is a sheath that protects the emerging shoot as it pushes up through the soil. The plumule is the growing point for the first shoots and leaves, and the radicle is the beginning of the root system. The emerging root is protected by a root cap called a calyptra and a sheath called a coleorhiza.

Germination begins with the coleorhiza pushing through the pericarp. It is quickly followed by the radicle growing through the coleorhiza. As the embryo emerges, a signal is sent to the endosperm to start feeding the growing baby corn plant, giving it a head start until it can make its own food via photosynthesis.

Up Next: We’ll take an inside look at the seeds of gymnosperms.

Do you find these posts valuable? Consider giving us a high five in the form of money to help us continue to tell the story of plants.

“A seed is a living thing that embodies roots, stems, leaves, and fruit in an embryonic state and retains the ability to convert the sun’s energy into a source of food.” — Seedtime by Scott Chaskey

Few things are more miraculous than seeds. Within them is a living plant in embryonic form. Under the right conditions, these tiny objects expand, pushing out the beginnings of the most minuscule weed to the most humongous tree. Looking at these otherwise unassuming specks, you would hardly guess that they held such potential.

Housed in a seed is the genetic material necessary for growth and reproduction, along with some stored sugars to get the plant started. All of this is enclosed in a protective case. It is a rare moment in a plant’s life – a time when it isn’t rooted in place and can, for a brief period, move around. With the help of agents like wind, water, and animals it can travel anywhere in the world, venturing as far as inches or miles from its parent plant. As long as it finds a suitable place to grow, its voyage is not in vain.

Seeds are the result of sexual reproduction in plants (with rare exceptions, which we will cover in a future post). After pollination, a pollen grain sends three haploid cells into the ovule of a flower. These cells unite with the haploid cells found within. One germ cell from the pollen grain goes to the formation of an embryo, while the other two cells help form endosperm, the food source for the developing embryo. The wall of the ovule becomes the outer layer of the seed, known as the seed coat or testa. The seed matures as the fruit it is nested in ripens. Eventually, the fetal plant within the seed is ready to find a new home.

Seed heads of rubber rabbitbrush (Ericameria nauseosa) – the fuzzy pappus attached to the fruits allows seeds to float in the breeze and travel away from their parent plant.

As with so many things in biology, there is no single type of seed. When it comes to seed anatomy, most seeds consist of the same basic components, but each species of plant has its own unique seed. In fact, a well-trained taxonomist can identify plants simply by observing their seeds. With such a wide variety of seeds, it is difficult to organize them into discrete categories, but we still try. What follows is an introduction to two types of seeds – endospermic and non-endospermic – using two basic examples.

The first thing you should know about these two examples is that both species are dicotyledons (or dicots, for short). This means that when the baby plant emerges, it has two cotyledons, which are also called embryonic leaves because they look like little leaves. All flowering plants have been divided into two groups based on the number of cotyledons they have, the second group being the monocotolydons (or monocots) which have only one cotyledon. This is an old-fashioned way to classify plants, but it is still useful in some instances.

The seeds of the castor bean plant (Ricinus communis) are endospermic seeds. This means that they retain the endosperm that was formed when two pollen grain cells joined up with the haploid cell in the ovule. The endosperm will help feed the growing embryo as it germinates. The two cotyledons are visible within the seed, but they are thin and broad, leaving plenty of space in the seed for the endosperm. The cotyledons are part of the embryo and are attached to the radicle, which is the embryonic root. The radicle is the first thing to emerge from the seed upon germination. The area between the radicle and the cotyledon is known as the hypocotyl. It becomes the stem of the germinating seedling.

An elaisome is attached to the outside of the seed coat of castor bean seeds. This fleshy, nutrient-rich appendage is particularly attractive to ants. They carry the seeds back to their colony and feed the elaisome to their young. The seeds, however, remain unconsumed. In this way, the ants aid in the seeds’ dispersal.

The seeds of plants in the bean family (Fabaceae) are non-endospermic seeds. This means that as the embryo develops, it uses up the majority of the endosperm within the seed. The food necessary for the seedling to get its start is all stored in its cotyledons. The common pea (Pisum sativum) is a good example of this. The embryo – which consists of the cotyledons, plumula (or plumule), hypocotyl, and radicle – takes up all available space inside of the seed coat. After germination, as the seedling develops, the plumule appears above the cotyledons and is the growing point for the first true leaves and stems.

In future posts, we will look at a few other types of seeds, as well as discuss various other seed-related topics. If you have a story to share about seeds, please do so in the comment section below.