The state flower of Texas blooms in early spring. At least most of them do anyway. Some don’t bloom until late spring and others bloom in the summer. The reason for the staggered bloom times is that the state flower of Texas is not one species but six. All are affectionately referred to as bluebonnets and all are revered by Texans.

As the story goes, at the beginning of the 20th century the Texas legislature set out to determine which flower should represent their state. One suggestion was the cotton boll, since cotton was a major agricultural crop at the time. Another suggestion was a cactus flower, because cacti are common in Texas, are long-lived, and have very attractive flowers. A group of Texas women who were part of the National Society of Colonial Dames of America made their pitch for Lupinus subcarnosus, commonly known as buffalo clover or bluebonnet. Ultimately, the nomination from the women’s group won out, and bluebonnets became an official state symbol.

The debate didn’t end there though. Many people thought that the legislature had selected the wrong bluebonnet, and that the state flower should be Lupinus texensis instead. Commonly known as Texas bluebonnet, L. texensis is bigger, bolder, and more abundant than the comparatively diminutive L. subcarnosus. This debate continued for 70 years until finally the legislature decided to solve the issue by including L. texensis “and any other variety of bluebonnet not heretofore recorded” as the state flower of Texas. 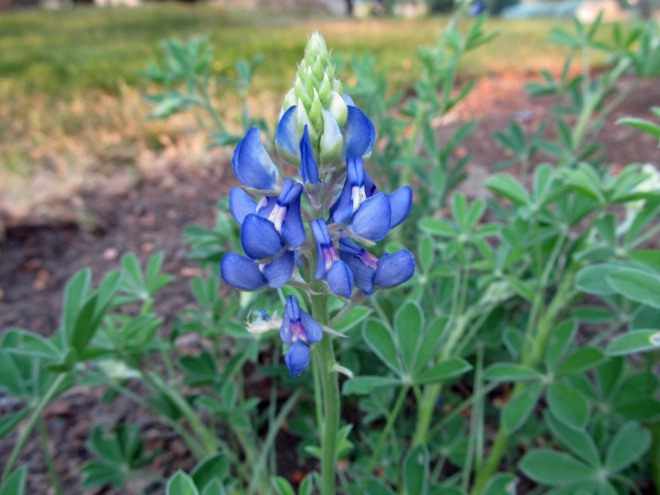 According to Mr. Smarty Plants, the list of Texas state flowers includes (in addition to the two already mentioned)  L. perennis, L. havardii, L. plattensis, and L. concinnus. Most on this list are annuals, and all are in the family Fabaceae – the pea family. Plants in this family are known for their ability to convert atmospheric nitrogen into plant available nitrogen with the help of a soil dwelling bacteria called rhizobia. The genus Lupinus includes over 200 species, most of which are found in North and South America. Others occur in North Africa and the Mediterranean. Plants in this genus are popular in flower gardens, and there are dozens of commercially available hybrids and cultivars.

L. subcarnosus is sometimes referred to as sandy land bluebonnet and occurs mainly in sandy fields and along roadsides. L. texensis is a Texas endemic; its native range includes the prairies and open fields of north and south central Texas. It is now found throughout Texas and bordering states due to heavy roadside plantings. L. perennis is the most widespread Texas bluebonnet, occurring throughout the eastern portion of the U.S. growing in sand hills, woodland clearings, and along roadsides. L. havardii is the largest of the Texas bluebonnets. It has a narrow range, and is found in a variety of soil types.  L. plattensis is a perennial species and occurs in the sandy dunes of the Texas panhandle. L. concinnus is the smallest of the Texas bluebonnets and is found mainly in sandy, desert areas as well as some grasslands.

“I want us to know our world. If I lived in north Georgia on up through the Appalachians, I would be just as crazy about the mountain laurel as I am about bluebonnets.” – Lady Bird Johnson