In 1946, North American beavers were introduced to the archipelago of Tierra del Fuego at the tip of South America in an attempt to start an industry based on beaver fur. Although this industry has not thrived, beavers have multiplied enormously. By cutting trees and building dams, they have transformed forests into meadows and also fostered the spread of introduced ground cover plants. Now numbering in the tens of thousands in both Chilean and Argentinian parts of the archipelago, beavers are the target of a binational campaign to prevent them from spreading to the mainland of these two nations. — Invasive Species: What Everyone Should Know by Daniel Simberloff

Beavers in South America are just one example of the series of effects a species can have when it is placed in a new environment. Prior to the arrival of beavers, there were no species in the area that were functionally equivalent. Thus, through their felling of trees and damning of streams, the beavers introduced novel disturbances that have, among other things, aided the spread of non-native plant species. Ecologists call this an invasional meltdown, wherein invasion by one organism aids the invasion of another, making restoration that much more difficult.

Complicated interactions like this are explored by David Wardle and Duane Peltzer in a paper published last month in Biological Invasions. Organisms from all walks of life have been introduced to forests around the world, and while many introductions have had no discernable impact, others have had significant effects both above and below ground.

The authors selected forest ecosystems for their investigation because “the imprint of different invaders on long-lived tree species can often be observed directly,” even when the invading organisms are doing their work below ground. Moreover, a greater understanding of “the causes and consequences of invasions is essential for reliably predicting large-scale and long-term changes” in forest ecosystems. Forests do not regenerate quickly, so protecting them from major disturbances is important. Learning how forests respond to invasions can teach us how best to address the situation when it occurs.

The authors begin by introducing the various groups of organisms that invade forests and the potential impacts they can have. This is summarized in the graphic below. One main takeaway is that the effects of introduced species vary dramatically depending on their specific attributes or traits and where they fall within the food chain. If, like the beaver, a novel trait is introduced, “interactions between the various aboveground and belowground components, and ultimately the functioning of the ecosystem” can be significantly altered. 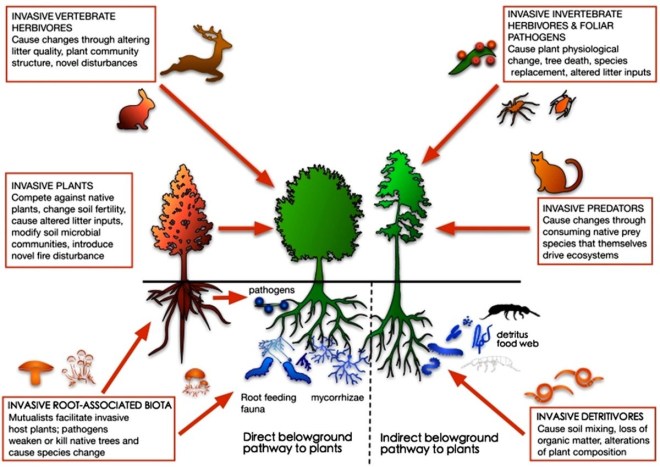 After highlighting some of the impacts that invasive species can have above and below ground, the authors discuss basic tenets of invasion biology as they relate to forest ecosystems. Certain ecosystems are more vulnerable to invasions than others, and it is important to understand why. One hypothesis is that ecosystems with a high level of species diversity are more resistant to invasion than those with low species diversity. This is called biotic resistance.  When it comes to introduced plants, soil properties and other environmental factors come in to play. One species of plant may be highly invasive in one forested ecosystem, but completely unsuccessful in another. The combination of factors that help determine this are worth further exploration.

When it comes to restoring invaded forests, simply eliminating invasive species is not always enough. Because of the ecological impacts they can have above and below ground, “invader legacy effects” may persist. As the authors write, this requires “additional interventions to reduce or remove [an invader’s] legacy.” Care also has to be taken to avoid secondary invasions, because as one invasive species is removed another can take its place.

Nitrogen-fixing plants (which, as the authors explain, “feature disproportionately in invasive floras”) offer a prime example of invader legacy effects. Introducing them to forest ecosystems that lack plants with nitrogen fixing capabilities “leads to substantially greater inputs of nitrogen … and enhanced soil fertility.” Native organisms – decomposer and producer alike – are affected. Simply removing the nitrogen fixing plants does not at once remove the legacy they have left. Examples include Morella faya invasions of forest understories in Hawaii and invasions by Acacia species in South Africa and beyond.

“It has been shown that co-invasion by earthworms enhances the effects that the invasive nitrogen fixing shrub Morella faya has on nitrogen accretion and cycling in a Hawaiian forest, by enhancing burial of nitrogen-rich litter.” – D.A. Wardle and D.A. Peltzer (2017) – photo credit: wikimedia commons

The authors conclude with a list of “unresolved issues” for future research. A common theme among at least a couple of their issues is the need for observing invasive species and invaded environments over a long period. Impacts of invasive species tend to “vary across both time and space,” and it is important to be able to predict “whether impacts are likely to amplify or dampen over time.” In short, “focus should shift from resolving the effects of individual invasive species to a broader consideration of their longer term ecosystem effects.”

This paper does not introduce new findings, but it is a decent overview of invasion biology and is worth reading if you are interested in familiarizing yourself with some of the general concepts and hypotheses. It’s also open access, which is a plus. One thing that is clear after reading this is that despite our growing awareness of the impacts of invasive species, there is still much to be learned, particularly regarding how best to respond to them.

Thanks to a friend of the blog, Awkward Botany now has a Facebook page and an Instagram. Please check them out and like, follow, friend, et al. While you’re at it, check out the Twitter and Tumblr too for all sorts of botanical and botanical-adjacent extras.