I first learned about Moon Trees in the fall of 2015. One of the trees – a loblolly pine – had been planted at an elementary school just down the street from where I was living at the time. It wasn’t a new thing – it was planted back in 1977, during the period when most other Moon Trees where being planted around the country and the world – but because it wasn’t doing too well, it was in the news. Members of the community, concerned about its long-term survival, were pitching in to help keep it alive. Once I was made aware of it, I also became concerned and decided to go check on it. I even wrote a post about it, which you can read here.

Now that nearly 5 years have passed, I figured I should go check on it again. I hadn’t heard any more news about it, so I assumed it was still hanging in there, but who knows? Maybe not. Since I was going to be on that side of town for Father’s Day, I made plans to stop by. My dad hadn’t seen the tree yet, so he decided to join me.

As we approached Lowell Elementary on our bikes, I was half-expecting the tree to be gone. It was in pretty sad shape when the community stepped in to help it. Braced for this possibility, I anxiously peered down the street as we biked closer. When the tree came into view, I felt relief and announced, “There it is!”

All this time later, it still looks a little rough. The majority of its bark remains largely obscured by crusty, dried up sap, and its canopy isn’t as full as it likely would be if it was a picture of health. But it’s alive and, surprisingly enough, still growing taller, reaching for the moon.

Any loblolly pine would feel out of place in Idaho – it’s a species whose distribution spans the southwest region of the United States, which is starkly different from the northwest – however, this individual in particular is an anomaly. The seed it sprouted from took a journey into space, circled the moon a number of times and then, as a sapling, was planted in Idaho (of all places). Now, over 40 years later, it stands as a symbol of resilience. Something we could all use right now, I’m sure.

My dad by the Moon Tree in Boise, Idaho

Me by the Moon Tree in Boise, Idaho

Was a Moon Tree planted near you? Is it still around? Tell us about it in the comment section below.

On January 31, 1971, Apollo 14 left Earth and headed for the Moon. It was the eighth manned Apollo mission and the third to land on the Moon. On board were three astronauts – Alan Shepard, Edgar Mitchell, and Stuart Roosa. Joining the astronauts were about 500 tree seeds that were given to Roosa by Ed Cliff, the Chief of the Forest Service at the time. While Shepard and Mitchell explored the surface of the Moon, Roosa and the seeds hovered above it in the spacecraft. After Shepard had hit a couple of golf balls and Roosa had circled the Moon 34 times, the crew rejoined and headed back to Earth.

Roosa’s collection of tree seeds consisted of 5 species – Douglas fir, redwood, loblolly pine, sycamore, and sweetgum. Upon returning to Earth, Roosa handed the seeds back over to the Forest Service. They were then planted at Forest Service stations in Mississippi and California. Some of the seedlings were planted adjacent to trees grown from seeds that had remained on Earth in order to conduct a comparison study. The other seedlings were available for dissemination.

Around this time (1976-77), America was celebrating its bicentennial, so many of the trees were planted in commemoration of this event. A loblolly pine was planted at the White House. A sycamore was planted in Washington Square in Philadelphia. Valley Forge got a Moon Tree, and so did Brazil, Japan, and Switzerland. Moon Trees were planted at various parks and institutions in many states throughout the country. In fact, there were so many requests for Moon Trees that several rooted cuttings of the original seedlings had to be produced.

Unfortunately, in the frenzy of shipping out Moon Trees, a complete record of where and when the trees were planted was not maintained, and so it remains unclear where all the trees are today and how many of them are surviving. When NASA employee, Dave Williams, became aware of Moon Trees, he embarked on a quest to compile a list of them. His webpage contains the short list of trees he has been able to confirm and document so far.

Loblolly pine (Pinus taeda) at Lowell Elementary in Boise, Idaho – one of many Moon Trees planted in the 1970’s.

And this is how I came to learn about Moon Trees. This fall, local news reported on efforts being made to save Boise’s Moon Tree. The soil around it is compacted, it’s not getting enough water, and it has become infested with a pest insect. When community members learned of its potential demise, they resolved to save it. Money was raised to pay for the water it requires, and a local tree company volunteered to assist with necessary treatments. Its future remains uncertain; however, this renewed awareness and attention may be just what it needs to survive.

Upon learning about Boise’s Moon Tree, I decided to pay it a visit. After all, not only is it in my hometown, but it is also in my neighborhood, just a short walk from my house. It was pretty obvious right away which tree was the Moon Tree as its trunk is completely covered in oozing sap – a sure sign of infection. It is also located in a spot that doesn’t appear to be receiving any supplemental irrigation. The stresses caused by compacted soil and dehydration left it vulnerable to attack. 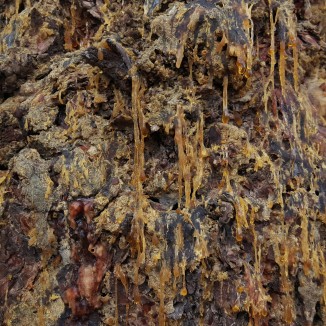 But maybe it wasn’t the best tree for the site to begin with. Loblolly pine (Pinus taeda) is native to the southeastern United States where it is commonly found growing in acidic, wet soils – a stark contrast to the dry, alkaline soils of the Treasure Valley. Still, it is Idaho’s only known remaining Moon Tree – a tree whose seed went to space, circled the moon, and was brought back to Earth where it was planted in celebration of the 200th anniversary of this nation. It is worth saving, with the hope being that it will inspire not only a connection to the natural world but also to the broader universe which all living beings call home.

–Houston, We Have Moon Trees

–A Race Against Time to Find Apollo 14’s Lost Voyagers

–In Search of Moon Trees