I first learned about Moon Trees in the fall of 2015. One of the trees – a loblolly pine – had been planted at an elementary school just down the street from where I was living at the time. It wasn’t a new thing – it was planted back in 1977, during the period when most other Moon Trees where being planted around the country and the world – but because it wasn’t doing too well, it was in the news. Members of the community, concerned about its long-term survival, were pitching in to help keep it alive. Once I was made aware of it, I also became concerned and decided to go check on it. I even wrote a post about it, which you can read here.

Now that nearly 5 years have passed, I figured I should go check on it again. I hadn’t heard any more news about it, so I assumed it was still hanging in there, but who knows? Maybe not. Since I was going to be on that side of town for Father’s Day, I made plans to stop by. My dad hadn’t seen the tree yet, so he decided to join me.

As we approached Lowell Elementary on our bikes, I was half-expecting the tree to be gone. It was in pretty sad shape when the community stepped in to help it. Braced for this possibility, I anxiously peered down the street as we biked closer. When the tree came into view, I felt relief and announced, “There it is!”

All this time later, it still looks a little rough. The majority of its bark remains largely obscured by crusty, dried up sap, and its canopy isn’t as full as it likely would be if it was a picture of health. But it’s alive and, surprisingly enough, still growing taller, reaching for the moon.

Any loblolly pine would feel out of place in Idaho – it’s a species whose distribution spans the southwest region of the United States, which is starkly different from the northwest – however, this individual in particular is an anomaly. The seed it sprouted from took a journey into space, circled the moon a number of times and then, as a sapling, was planted in Idaho (of all places). Now, over 40 years later, it stands as a symbol of resilience. Something we could all use right now, I’m sure. 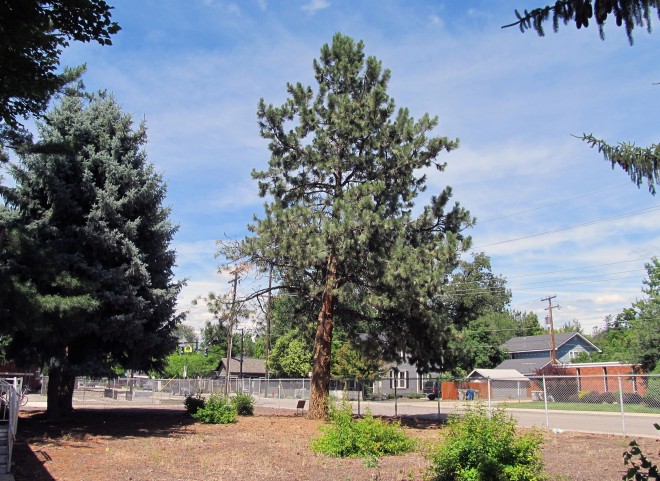 My dad by the Moon Tree in Boise, Idaho

Me by the Moon Tree in Boise, Idaho

Was a Moon Tree planted near you? Is it still around? Tell us about it in the comment section below.