Spring has sprung, which is evidenced by warming temperatures, lengthening daylight, and plants turning green and producing flowers. For those of us living at low elevations, signs of spring have been around for a while. Our landscapes are green again and gardens are coming to life. However, up in the mountains (and at higher latitudes), spring takes a bit longer to manifest itself. Snow is still the dominant groundcover, and freezing temperatures remain the norm. Yet even in these harsh conditions there are signs of spring. The flowers of the perennial forb, mountain kittentails (Synthyris missurica), are one of those signs.

Mountain kittentails are one of the earliest plants to flower in the mountains, often flowering while there is still snow on the ground. For this reason, their flowers are not commonly seen in the wild. Their range extends from Washington and Oregon down into northern California and across into Idaho and Montana. They occur in rocky, shady areas at mid to high elevations. Mountain kittentails are low growing with rounded, toothed leaves. Their flowers appear in tight clusters on upright stalks and are blue to purple in color. They are a member of the figwort family (Scrophulariaceae), sharing that distinction with a popular group of flowering plants that is common in the west, the penstemons. Mountain kittentails were first collected during the Lewis and Clark expedition in 1806. The expedition discovered this plant as they passed through the mountains of northern Idaho.

Mountain kittentails are not a commonly cultivated plant, but the Idaho Botanical Garden in Boise, Idaho happens to have a few growing in one of their native plant collections, giving more people an opportunity to see them in bloom. Because the garden is located in a valley, their mountain kittentails flower a few weeks earlier than their native counterparts, which means you’ve probably already missed them – but there’s always next year! 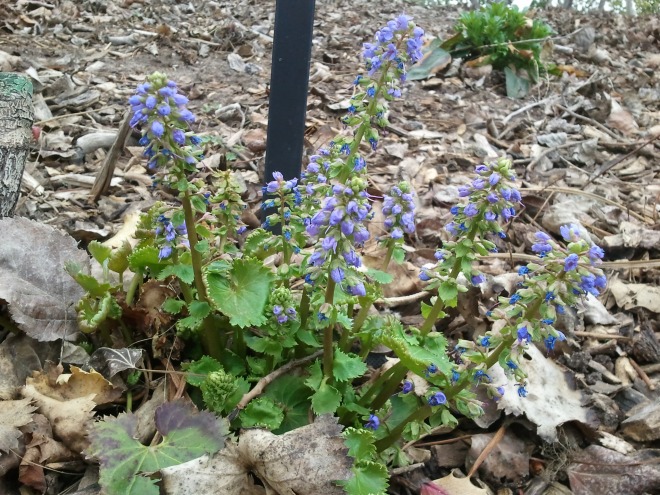