Last month I posted a few photos of some of the weeds and wildflowers of the Boise Foothills. In that post I touched briefly on the ecology of the foothills, and a few readers expressed interest in more posts about this topic. It is definitely a topic I would like to explore further, but it is not one that I know a ton about. In fact, despite spending the majority of my life residing in this high desert, sagebrush-dominated ecosystem, it has only been in the past few years that I have really gained an appreciation for it. Perhaps that’s understandable. This landscape, which initially appears drab, lifeless, and boring, is not easy to love at first…until you do a little exploring, at which point you find it teeming with life, loaded with diversity, and worthy of admiration.

That is one of the themes of a new PBS Nature documentary, The Sagebrush Sea, which debuted on PBS in May 2015. The film is an intimate view of what’s really going on in this vast, seemingly empty landscape that many of us simply ignore, passing through on our way to somewhere else. It is an introduction to a fascinating ecosystem, shaped and formed by extreme events and inhabited by plants and animals that have unique adaptations that allow them to survive the harsh conditions of the high desert. Some of these plants and animals can be found nowhere else on earth. For anyone looking to learn more about the ecology of the Boise foothills and/or the larger ecosystem of which they are a part, this is an excellent place to start. 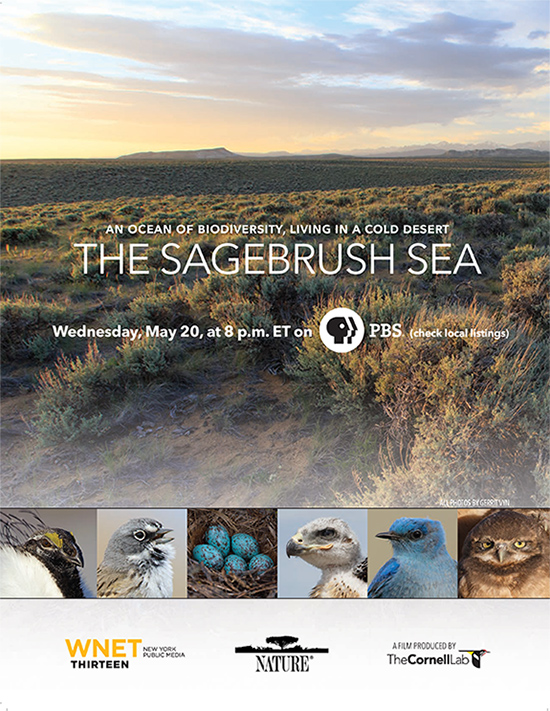 The sagebrush steppe is a plant community dominated by sagebrush (Artemisia tridentata and its various subspecies) and bunchgrasses. At one point it covered as many as 500,000 square miles of western North America – hence “the sagebrush sea” – but human activities have reduced it to half that size. The plants and animals in this ecosystem have been coevolving together for at least 2 million years. Sagebrush is, as the narrator of the film says, “the anchor of the high desert,” living up to 140 years old and helping to ensure that the desert doesn’t become a dust bowl. Sagebrush also provides food and shelter for a great number of species.

The Sagebrush Sea was produced by the The Cornell Lab of Ornithology, so while lots of other plant and animal life get adequate screen time, the birds of the sagebrush steppe dominate the film. One species in particular, the greater sage-grouse, is the star character, driving the film’s narrative and speaking for the protection of this threatened and underappreciated ecosystem.

Sage-grouse are endemic to the sagebrush steppes of the intermountain west. They are sensitive to disturbances and are “tied to unbroken expanses of sage.” Their breeding grounds (leks) are large patches of open ground, but when they aren’t breeding (which is the majority of the year) they are taking refuge in the sagebrush and grasses. The females make nests below sagebrush, where they blend right in, camouflaged from predators. Sage-grouse consume various plants and insects throughout the year, but their diet consists mainly of the evergreen leaves of sagebrush. Just 200 years ago there were up to 16 million sage-grouse in the sagebrush sea, today that number has been reduced to around 200,000. Due to such a steep decline, they may soon be added to the endangered species list.

Because sage-grouse are so reliant on healthy, intact, widespread sections of sagebrush-steppe, they are considered an umbrella species. Taking measures to protect them will simultaneously spare and even improve the lives of numerous other species with similar requirements. To begin with, there are a handful of other bird species that nest nowhere else except in sagebrush, specificallly the sagebrush sparrow, the sage thrasher, and the brewer’s sparrow. Other animals feed on sagebrush and rely on it to make it through the winter, such as pronghorn and mule deer. Sagebrush is also considered a nurse plant, providing shade and moisture for grass and forb seedlings growing below it.

The sagebrush steppe is threatened by the usual cast of characters: habitat fragmentation, urban and agricultural development, invasive species, climate change, etc.  Some specific activities like cattle ranching and oil and gas drilling also come into play. While The Sagebrush Sea briefly introduces some of the major threats to this ecosystem, it does not dwell on any single issue or point fingers in any one particular direction. For one, it is hard to place blame when there are so many factors involved; but more importantly, the filmmakers wanted the film to be accessible to everyone in order to foster a greater appreciation for the sagebrush sea and a consequent desire to protect it. The debates regarding this part of the world are heated enough, and those directly involved are already well aware of the issues.

This is a beautiful film. The images it captures are captivating and at times breathtaking. Apart from the sage-grouse, various animal families are introduced throughout, each one stealing your heart. My only complaint is that, at only 53 minutes, the film is too short. Luckily, the world they depicted is right outside my door, and I am now even more inspired to explore it.