Back in October 2017, we discussed some potential benefits of spontaneous urban vegetation (commonly referred to as weeds) and the abandoned or undeveloped urban spaces they inhabit. There is much to learn about the role these plant communities play in the ecology of cities and their contribution to vital ecosystem services. In a review published in the December 2013 issue of Environmental Entomology, researchers from Ohio State University discuss how studying arthropod communities on vacant lands can help “advance our ecological understanding of the functional role” these habitats may have in our cities.

Arthropods were selected as the subject of study because their “populations respond quickly to changes in the urban environment, making them key indicators of how land use change influences biodiversity.” Urban-dwelling arthropods “are diverse and occupy multiple trophic levels” and are “easy to sample.” Additionally, many of the services that vacant, unmanaged land offers are “arthropod-mediated,” including “pollination, decomposition, nutrient cycling, and biological pest control.”

Vacant land was selected as the study site because “understanding [its] ecological value is important to the advancement of urban ecology and ecosystem management,” and even though such areas are often overlooked in conservation planning, studies have shown that they “have the potential to be valuable reservoirs of biodiversity.” In order to determine just how valuable vacant land might be, more research is needed comparing these spaces to other parts of the city. In addition, vacant lots are generally ephemeral and in due time may be developed. Whether this means that a building or parking lot takes their place or that they are converted into a park, garden, or urban farm, it is important to understand what these land use changes mean for urban biodiversity and ecological functions.

Urbanization is often measured by comparing the amount of built area to the remaining green space. Where there is a high degree of urbanization, there is a low degree of green space comparatively. As urbanization increases, so does habitat fragmentation, pollution, and the urban heat island. In the meantime, biodiversity suffers. The authors cite a number of studies demonstrating that increased urbanization negatively impacted beneficial insect populations. For example, a study in the United Kingdom found that bumblebee diversity in gardens “decreased with increasing urbanization of the surrounding landscapes.” Similar results were found in a study we wrote about. 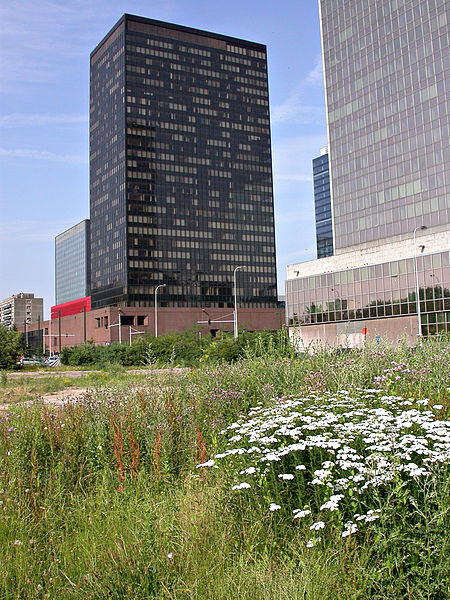 Together with remnant natural areas, parks, private and public gardens, greenways, and commercial landscapes, vacant lots are part of a mosaic of urban green space. Each of these areas “experience different levels of disturbance and harbor varying plant species,” which, in turn, “influence arthropods and the services they can supply within and between patches.” Because vacant lots can remain undisturbed and virtually unmanaged for long periods of time, they help provide a contrast to the homogeneous, highly managed green spaces that are common in cities. By their very nature, they “have the potential to aid conservation and enhance green space quality and connectivity within city centers.”

It’s one thing to recognize the value of vacant lots; it’s another thing to change the negative perception of them. Aesthetics are important, and to many people vacant lots are an eyesore and a sign of neglect. Some management may be necessary in order to retain their important ecological value and assuage the feelings of the public. The authors present a number of ways that vacant lots can be and have been managed in order to achieve this goal. They also consider how certain management strategies (mowing, removing and/or introducing plant species) can impact arthropod populations for better or worse. Yet, where vacant lots are left alone and allowed to advance in the stages of ecological succession, changes in arthropod diversity and ecosystem function also occur. For this reason, “the regional species pool of a city requires a mosaic of all successional stages of vacant land patches.”

Finally, the authors discuss the conversion of vacant land to urban agriculture. Even this land use change can have dramatic effects on the arthropod community. For example, undisturbed or unmanaged areas are a habitat requirement for cavity and soil nesting bees, and regular disturbance associated with farming may interfere with this. Also where pesticides are used or plant diversity is minimized, the arthropod community will be affected.

Thus, “the study of vacant land ecology necessitates a transdisciplinary approach” in order to determine how changes in vacant, urban land “will affect diverse ecosystem functions and services.” A variety of management strategies are required, and land managers must “determine the most appropriate strategies for improving the sustainability of cities from a connected landscape perspective.” It is clear that vacant lots have a role to play. The extent of their role and our approaches to managing them requires careful investigation.

One thing is certain – for biodiversity’s sake – don’t pave over vacant lots to put up parking lots.