My interest is piqued any time plants are featured or plugged in popular culture. Hence my ongoing series of posts, Botany in Popular Culture, featuring Futurama, Saga of the Swamp Thing, etc. Plants just don’t get enough airtime, so it must be celebrated when they do. Which is why I was excited to learn about Chicago Botanic Garden‘s new podcast, Botanical Mystery Tour, in which the plants referenced in pop culture take center stage.

The hosts, as they state in each episode’s introduction, “dive into the botany hidden in our favorite stories.” To help with the discussion, they bring in experts that work at Chicago Botanic Garden to explore the science (and fiction) behind the plant references. In addition to discussing pop culture and the related science, the guests share details about the work they do at the Garden and some of the research they are working on.

In the first episode, Jasmine and Erica ask Paul CaraDonna about the drone bees featured in an episode of Black Mirror. Since many bee species are in decline, will we have to resort to employing robot bees to pollinate plants that rely on bee-assisted pollination? A great discussion about native bees and colony collapse disorder ensues.

In episode two, the hosts ask why humans are so obsessed with corpse flowers. Thousands of people flock to botanical gardens to see these humongous, stinky flowers on the rare occasions they are in bloom, so what is so appealing about Amorphophallus titanum? Patti Vitt joins the discussion to share details about this fascinating plant.

A corpse flower in bloom is a brief and uncommon occurrence, reminiscent of the Sumatran Century Flower in The Simpsons and the 40 Year Orchid in Dennis the Menace.

The fourth (and latest) episode is an exploration into the magical world of mushrooms. In Alice in Wonderland, Alice encounters a large, hookah-smoking caterpillar sitting atop a giant mushroom. Are there mushrooms big enough that a person could actually sit on them like Alice does? Greg Mueller joins the podcast to address this and many other mycology-based questions. The conversation includes a great discussion about why a botanical garden (whose main focus is plants) would be interested in fungus. 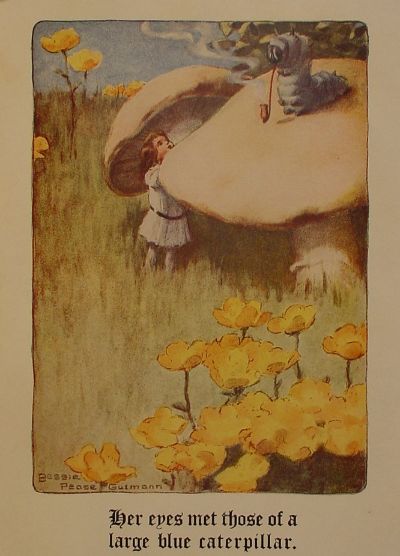 The discussions in this podcast are fun and enlightening. The hosts shine the spotlight on often overlooked characters in popular media, and with the help of their guests, lead captivating conversations about the science related to these characters. With only a handful of episodes available so far, it will be easy to get caught up. And then you, like me, will find yourself anxiously looking forward to embarking on another Botanical Mystery Tour.

Is there a plant-themed podcast or podcast episode you would like to recommend? Please do so in the comment section below.