Like so many urban areas that had their start as agricultural communities, Boise is home to a vast network of canals. Major canals, such as the New York Canal, stretch across the valley and divert water through an extensive series of laterals. This water once irrigated numerous farms and orchards found within Boise and beyond. While large farms still exist outside of Boise – as well as a few small farms within city limits – much of this water now goes to irrigating lawns and gardens of city residents who are lucky enough to have access to it.

Because of the way these canals weave their way throughout Boise and into the surrounding area, there is interest in transforming them into transportation corridors for bicyclists and pedestrians. This would be in addition to the Boise River Greenbelt, a 30 mile trail system that already exists along the Boise River, and would vastly increase access to alternative and sustainable transportation for people living in the area.

Accessibility to these canals is limited, but where trails are available, they are a great place to observe wild urban flora and urban wildlife. This month, I explored a section of the Ridenbaugh Canal that extends about a thousand feet between Vista Avenue and Federal Way. There is a wide, dirt trail on the north side of the canal, easily accessible from Vista Avenue, that ends at the railroad tracks which run alongside Federal Way. The bank of the canal is steep, but there is one spot at the end of the trail that leads down to the water’s edge. Weeds are abundant along both sides of the trail, so it’s a great place to become familiar with common members of our wild urban flora.

A long strip of white top (Lepidium sp.) flanks a fence alongside the trail. 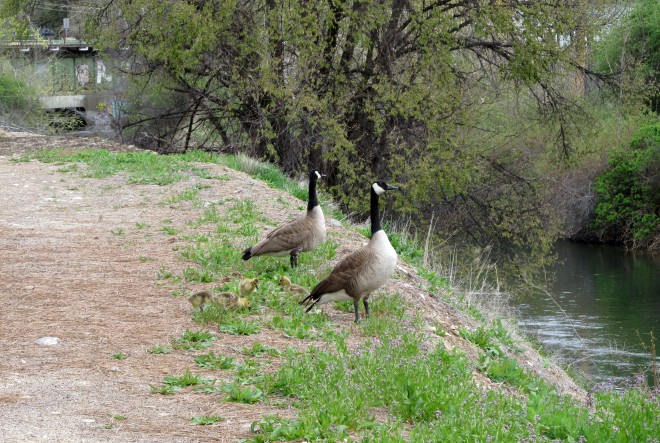 A pair of Canada geese and four goslings have made this stretch of the canal their home.

Like all posts in the Weeds of Boise series, this will be updated as I identify and photograph more of the weeds found in this location. If there is a canal near you, get outside and take a look at what’s growing along the banks. Let me know what you find in the comment section below.