Matt Groening and David X. Cohen’s animated sitcom, Futurama, is replete with social commentary. Set in the 31st Century, it’s not surprising that much of that commentary involves environmental issues. Episode 13 of season 6 – a special, holiday season episode – addresses a number of such issues, including extinction, global warming, fossil fuel depletion, and Colony Collapse Disorder. The episode is broken up into three, distinct segments; each has its own storyline, but all – apart from being environmentally themed – center around traditional (in the fictional world of Futurama) holiday celebrations. Hence, the title of the episode: The Futurama Holiday Spectacular.

Botany plays a particularly prominent role in the first segment of the episode. In the 31st Century, Christmas has morphed into a holiday called Xmas. In the opening scene, the Planet Express Crew has decorated a palm tree to look like a Christmas tree. Looking despondent, Philip J. Fry (a pizza delivery boy from the 21st century who was inadvertently cryopreserved and thawed 1,000 years later) laments, “Something about Xmas just doesn’t feel like Christmas.”  Just then, the arrival of Santa is announced.

In the 31st Century, Santa Claus has been replaced by a robot called Robot Santa, and instead of gifts and holiday cheer, he brings violence and mayhem. The crew begins to lock down the Planet Express headquarters in preparation for Robot Santa’s arrival. Disturbed by this, Fry demands to know how “this crazy holiday” is celebrated – “preferably in song.”  At which point, Robot Santa bursts out of the fireplace singing, “It’s the violentest season of the year…”

After a few violent exchanges between the crew and Robot Santa, Robot Santa sings, “The one thing that you need to make your Xmas Day splendiferous / Is a pine tree – a pine tree that’s coniferous.” The crew agrees; they need “an old-fashioned pine tree.” But there is one problem.

“Pine trees have been extinct for over 800 years,” explains Professor Farnsworth. Apparently, they were all chopped down and turned into toilet paper during something called “The Fifty-Year Squirts.” Yet, the Professor exclaims, “There is one hope and, as usual, it’s Norwegian!” And at that, the crew heads off to Norway.

In Norway, the crew arrives at the Svalbard Global Seed Vault where, as the Professor explains, “since 2008, the vault has preserved seeds of every known plant species in case of extinction.” They are confronted by a seed vault employee who asks why the crew is “pokey-poking about the seed vault – guardian of mankind’s precious botanical heritage there?”

The Professor tells the man that they are there to “rummage about a bit.” The crew notes that there is a Germ Warfare Repository that has been constructed right next to the seed vault and asks if there are any cross-contamination concerns. The man says, “No,” and then lets them inside where he brings them a container marked Pinus xmas. Amy notices some “splork” on the seeds and asks, “It’s not germs is it?” Again the man says, “No.”

The Planet Express crew at the Svalbard Global Seed Vault being presented with the seeds of Pinus xmas.

Back in New New York, Fry plants a pine tree seed outside the Planet Express building. A year later, a sapling as tall as Fry has emerged. Fry declares, “Now that’s a tree worth chopping down.” At that point, President Nixon pulls up in his limousine and sees the tree. “That’s what my poll numbers need, ” he says turning to Vice President Cheney – both of them animated heads in jars. Cheney orders Nixon to steal the tree.

The tree is transplanted in front of the White House. During the Xmas tree lighting ceremony, the tree begins to grow rapidly. Apparently it was contaminated with a weaponized virus after all. It begins to produce cones which then fly off the tree and explode. Shortly after the explosions, more pine trees begin to emerge and grow rapidly, at which point Leela exclaims, “Wait! This could be a good thing. Reforestation has begun!” However, this reforestation is occurring at an extremely rapid pace, and before long all land on Earth is completely covered in pine trees.

Soon, all manner of wildlife is found frolicking among the trees. Again Leela exclaims, “Arguably, this could be a good thing. The planet has returned to its primeval state!” The Professor concurs, “All these pine trees are fighting global warming by producing oxygen.”

But the “good news” doesn’t last long. The oxygen level continues to increase and quickly reaches 80%. Ignorantly, Bender decides to celebrate his own laziness with a cigar. As he lights it, the entire planet bursts into flames. Robot Santa returns to announce, “Ho ho ho! Everyone’s dead!” 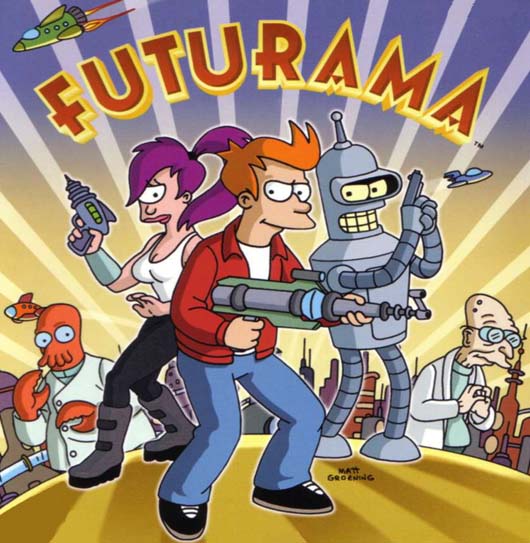 Similar dark comedy ensues in the other two segments as the crew learns about the holiday traditions of Robanukah and Kwanzaa. Again, both segments explore important environmental concerns in the process. Al Gore’s animated head in a jar makes appearances throughout the episode. If you are looking for some added hilarity during this holiday season – as well as some bleak environmental messaging – you can’t go wrong with Futurama’s Holiday Spectacular.

Interesting fact: In 2011, this episode of Futurama won an Environmental Media Award for best comedic television episode with an environmental message. EMA’s have been awarded since 1991 to “honor film and television productions and individuals that increase public awareness of environmental issues and inspire personal action on these issues.”