A couple of weeks ago, Sierra and I were in Ketchum, Idaho taking a much needed mid-October vacation. The weather was great, and the fall color was incredible, so heading out on multiple hikes was a no-brainer. On our hikes, I found myself increasingly drawn to all of the snags. Forested areas like those found in the Sawtooth National Forest are bound to have a significant amount of standing dead trees. After all, trees don’t live forever; just like any other living being, they die – some of old age, some of disease or lightning strike or any number of other reasons. But death for a tree does not spell the end of its life giving powers. In the case of snags, it’s really just the beginning.

Death might come quick for a tree, but its rate of decomposition is slow. Fungi move in to begin the process and are joined by myriad insects, mosses, lichens, and bacteria. The insects provide food for birds, like woodpeckers and sapsuckers who hammer out holes in the standing trunk. As primary cavity nesters, they also nest in some of these holes. Secondary cavity nesters make a home in these holes as well. This includes a whole suite of birds, mammals, amphibians, and reptiles. Without the habitat provided by snags, many of these animals would disappear from the forest.

Eventually snags fall, and as the rotting continues, so does the dead tree’s contribution to new life. It’s at this point that snags become nurse logs or nurse stumps, providing habitat and nutrients for all sorts of plants, fungi, and other organisms.

Unfortunately I can’t bring a you a complete representation of the many snags of Sawtooth National Forest. You’ll have to visit sometime to see them all for yourself. Instead, what follows is a small sampling of a few of the snags we saw near Ketchum and Stanley. 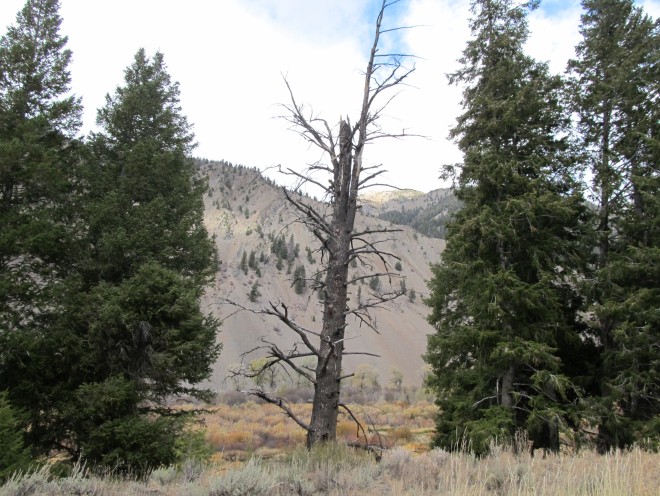 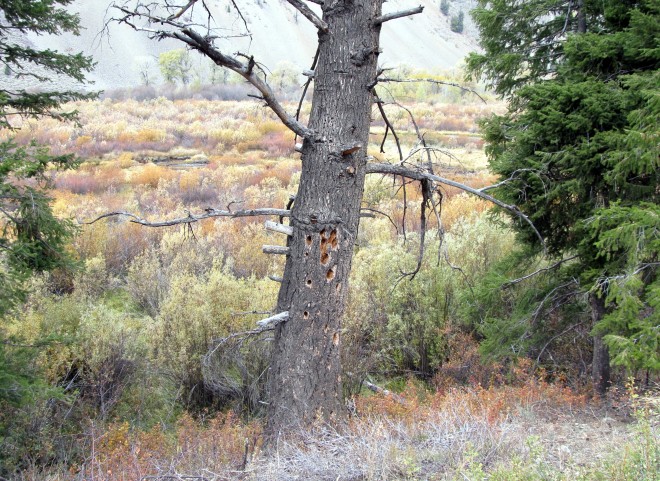 just look at those cavities

For more snag and nurse log fun, check out the following episodes of Boise Biophilia:

This will be the last post for a few weeks as I will be taking a break to finish working on a related project. I hope to be back sometime in December with more posts, as well as the unveiling of what I have been working on. In the meantime, you can stay updated by following Awkward Botany on Twitter or Facebook.

It’s October, so fall is in full force in the northern hemisphere. Days are shorter and temperatures are cooler, but one sure sign that fall is here is that the leaves on deciduous trees are changing colors. Every autumn, leaves that were once a familiar green turn brilliantly red, fiery orange, or vibrantly yellow. And then they fall to the ground leaving trees exposed – just trunks and branches  – skeletons of what they once were during warmer and brighter days.

Surprisingly enough, the colors seen in autumn are largely present in the leaves throughout their lives, but we don’t see them. We only see green. This is because chloroplasts (cell organelles responsible for carrying out photosynthesis) contain chlorophyll, one of three main pigments found in the cells of leaves throughout the growing season. Chlorophyll absorbs red and blue light and reflects green light. Because chloroplasts are so abundant in the cells of leaves, leaves look green.

But carotenoids are hanging around, too. The second of the three main pigments, carotenoids protect chlorophyll from oxidation and aid in photosynthesis. They reflect blue-green and blue light and appear yellow, however their population is considerably smaller compared to chlorophyll, so their yellow color is masked.

When day length decreases, the level of chlorophyll in plant cells diminishes. As a result, the yellow color of the carotenoids begins to show. Also, a layer of cells called the abscission layer forms between branches and petioles (i.e. leaf stems). This abscission layer is what eventually causes branches to drop their leaves. As the chlorophyll begins to die off and the abscission layer forms, anthocyanins (the third of the three main pigments found in plant cells) are synthesized. Anthocyanins absorb blue, blue-green, and green light and appear red.

With chlorophyll virtually absent (and photosynthesis brought to a halt) carotenoids and anthocyanins become the major pigments found in leaves, giving them the autumn colors we are accustomed to seeing. But here is where it gets tricky…

Fall leaf color is largely dependent on various environmental conditions, including temperature, amount of sunlight, and soil moisture. If autumn is warm and wet, chlorophyll may be slow to die, and anthocyanins may be slow to form. Chlorophyll drops off more readily when it is cool and dry, and anthocyanins synthesize more readily when days are sunny. Dry, sunny days followed by cool, dry nights are said to offer the most vibrant fall colors. Additionally, global climate change is now playing a role, so fall colors may start to appear earlier or later or last longer or shorter depending on the region.

Do you have a favorite place to view fall foliage? Add your comments below. 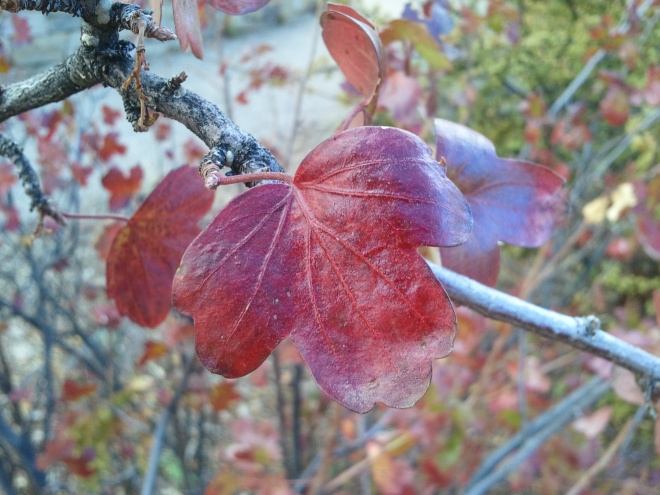