Most of us know creeping charlie as the all-too-often irritating weed which takes over our grassy lawns. This evergreen plant’s life cycle is year round. The garden-invading variety which sprouts little bluish-purple flowers has been given the title Glechoma hederacea (or sometimes Nepeta glechoma) via binomial nomenclature and is a member of the mint family, Lamiaceae. Additional common names for this creeping charlie include ground ivy, catsfoot, and field balm.

Travelers from Europe took the plant with them, distributing it throughout other parts of the globe, and it is now deemed an aggressive, invasive weed in various areas in North America. It has crenate leaves, and its size varies depending on its living conditions. It has two methods of reproduction. The first is made possible by offshoots called stolons (or runners), stems with the special function of generating roots and transforming into more plants. Thus, you will often find not an individual creeping charlie plant, but a whole patch, all of them connected via the runners. The other self-distribution method is simple: seeds. 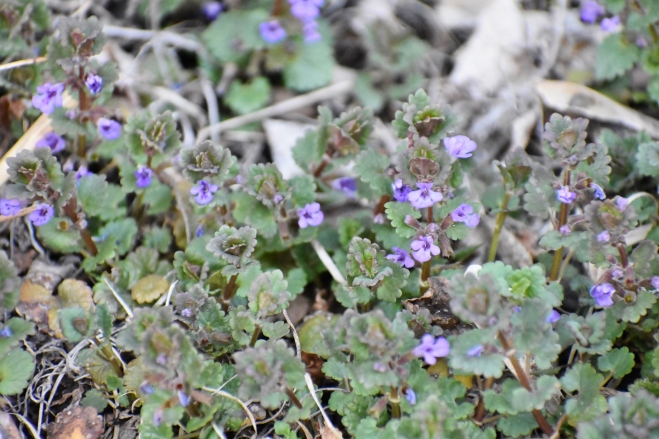 The creeper is edible, and if you were in a spot where you didn’t know when your next meal would be, this type of creeping charlie would probably be a welcome source of energy. Wild food educator, Karen Stephenson, suggests its use in simple dishes such as soups and omelets, but that’s probably for those who are cooking at home and not trying to fend for their lives in some forest. Starving in the woods is a bit of an extreme, but it has happened. Glechoma hederacea has also been used for making tea. It contains minerals like copper and iron, as well as a significant amount of vitamin C.

The weed also has a number of possible health benefits such as being a diuretic, anti-inflammatory, and antiviral. However, other researchers have cautioned people to be leery of consuming it as it has been known to be fatal to equines and bovines. It contains chemicals that can discomfit the gastrointestinal tract. It is further suggested that during pregnancy women should not intake any amount of any type of creeping charlie.

Up to this point you may have found the terms I’ve used, such as “this type of creeping charlie,” to be a little odd. In fact, the term creeping charlie does not refer to only a single species of creeper. It’s actually used for several.

Another plant hailed as “creeping charlie” is Pilea nummulariifolia of the family Urticaceae, a grouping otherwise known as the nettles. Pilea is the name of the genus of creeping plants; the artillery plant is also classified under this genus. Pilea nummularifolia is also known as Swedish ivy and is often grown as a houseplant. It is native to the West Indies and parts of South America. This viney plant flourishes when supplied with an ample amount of water.

Yet another plant commonly referred to as creeping charlie is Micromeria brownei, synonymously referred to as Clinopodium brownei. It is also used in some teas, but as mentioned above, pregnant women in particular should steer away from consuming it. Apart from the term creeping charlie, a few more common names for this plant include Browne’s savory and mint charlie. Like Glechoma hederacea, Browne’s savory is considered a mint. It produces flowers that are white with hints of purple on the petals and in the throat. This species is quite common in the state of Florida and in parts of Central America; although plants in this genus grow around the world.

Like Pilea nummularifolia, this species loves a good source of water. Its thirst for moisture is so strong, that it can actually adapt itself to an aquatic lifestyle, that is, one which occurs in water and not in dry soil. Many aquarists, people who enjoy keeping aquatic life, love this plant. It can also be trimmed with practically no damage to the plant. It is extremely durable and quite capable of adapting to different circumstances. For instance, Micromeria brownei can be situated midground inside a fish tank. The creeping charlie is perfectly at home totally submerged under water. If a plant floats to the surface then it should typically produce flowers. This adds a new dimension to some of the generic aquatic flora which is often used in many tank displays.

There you have it. Three different types of plants that have different uses and dangers, and they are all called creeping charlie. Be advised when you’re talking about true creeping charlie – Glechoma hederacea: the invasive weed with the purple flower – that you remember to specify, because “creeping charlie” could mean one plant to you and some plant from an entirely different family to another.

John Tuttle is a Catholic guy with a passion for the media and creativity. Everything about science and health interests him. He’s a writer for publications such as ZME Science and Towards Data Science. John has started his own blog as well called Of Intellect and Interest. He’s also a published ebook author and the 1st place winner of the youth category of the 2017 Skeena Wild Film Fest. You can follow him on Facebook here, and he can be reached anytime at jptuttleb9@gmail.com.

6 thoughts on “The Creeping Charlies and Common Name Confusion”