According to a study published in American Journal of Botany by Ibarra-Cerdeña, et al., Stenocereus queretaroensis, a species of columnar cactus endemic to western Mexico, adheres to this scenario. Stenocereus is a genus in a group of columnar and tree-like cacti called the Pachycereeae tribe. Cactus in this group are generally bat pollinated; however, their flowers are typically visited by various species of birds and insects as well, and in some cases, bats are not the primary pollinator. In their introduction, the authors note that specialization appears to be more common in tropical latitudes, and chiropterophilic (bat pollinated) columnar cacti that occur in temperate regions can be comparatively more generalized. This is because “extratropical chiropterophilic cacti appear to be faced with unpredictable seasonal year-to-year variation in pollinators,” while “cacti in tropical regions” experience “highly reliable seasonal availability of nectar-feeding bats, thereby leading to a temporally stable pollination system.”

Stenocereus queretaroensis is a massive cactus, reaching up to ten meters tall. Several vertical stems rise from a short, stocky, central trunk. Each stem has up to eight distinctive ribs and averages around 15 centimeters in diameter. Groupings of white to grey spines up to four centimeters long appear along the ribs. Flowers are light-colored, around 10 to 14 centimeters in length, and occur along the upper half of the stems, extended well beyond the spines. Flowers open at night – producing abundant nectar – and close by the afternoon the following day. Floral characteristics led the authors of this study to predict bats to be the main pollinator, and they set up a series of experiments to test this. 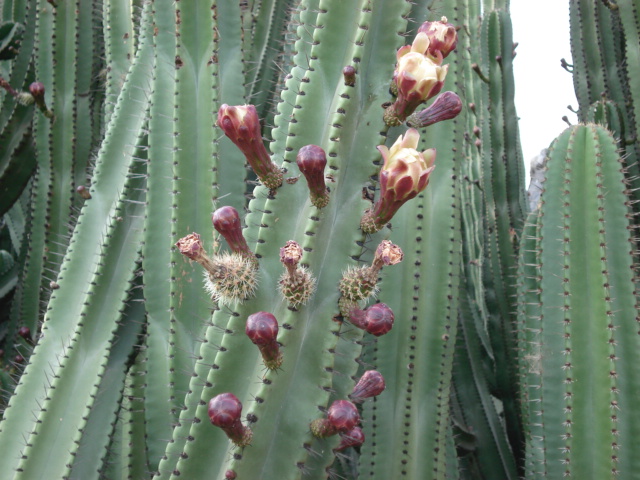 Part of their experiment consisted of five treatments involving 130 flowers on 75 plants. One group of flowers was bagged and allowed to self-pollinate naturally, while another group was bagged and self-pollinated manually. A third group was left exposed during the night but bagged in the morning, while a fourth group was bagged during the night and exposed during the daytime. The final group was left alone. For each of these five treatments, aborted flowers and mature fruits were counted and seed set was determined. Nectar samples were taken from a separate group of flowers at two hour intervals from 8:00 PM to 8:00 AM, after which no nectar was produced. A camera was also used to document floral visits. Visits were deemed “legitimate” when the “visitor’s body came in contact with anthers and/or stigma” and “illegitimate” when “no contact with anthers or stigma” was made.

The researchers found S. queretaroensis to be “incapable of self-pollination,” as no fruit set occurred for the first two treatments. The control group and the nocturnally exposed group had nearly identical results, producing significantly more fruits with greater seed set compared to the nocturnally bagged group. During the day, flowers were visited by four species of birds (two hummingbirds, a woodpecker, and an oriole) and several species of bees (mainly honey bees). During the night, apart from illegitimate visits from a nectar robbing hawkmoth, one species of bat was the dominant floral visitor, and the majority (93.8%) of the visits were legitimate. This bat species was Leptonycteris curasoae, the southern long-nosed bat. 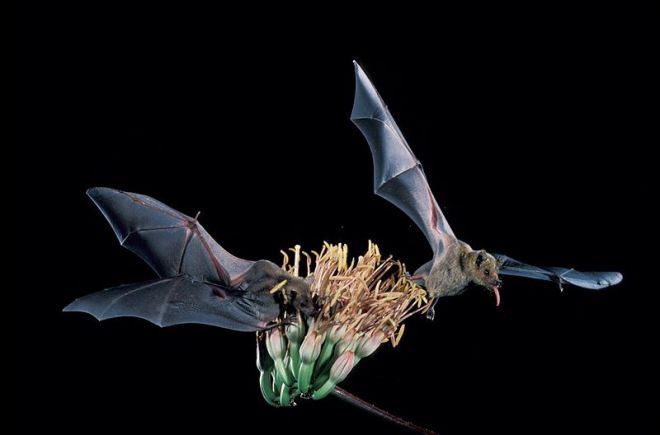 The abundance of nectar-feeding bats was monitored in the study area over a four year period, and L. curasoae was by far the most abundant species throughout the study period. Nectar produced in the flowers of S. queretaroensis was at its maximum around midnight, which seemed to correlate with observations of bat visits. Even though daytime visitors appeared to contribute to fruit and seed set, the nocturnal treatment produced significantly more fruit with significantly higher seed set, suggesting that bats are the more efficient pollinator. Insects visiting during the daytime, when nectar was decreasingly available, were most likely robbing pollen.

The authors acknowledge that for most plant species, “a wide array of taxonomically diverse fauna such as insects, birds, and mammals usually serve as potential pollinators,” and that “generalized pollination systems are more frequent than specialized ones.” However, in this case, “a close association between L. curasoae and S. queretaroensis [suggests] that the chiropterophilic syndrome is still a useful model.”