This is a revised version of a post that was originally published on January 14th, 2015. It includes excerpts from a chapter entitled, “Portrait of Splachnum,” in the book, Gathering Moss, by Robin Wall Kimmerer.

Certain plants, like corpse flowers and carrion flowers, emit foul odors when they bloom. The scent is akin to the smell of rotting flesh, hence their common names. The purpose of this repugnant act is to attract a specific group of pollinators: flies, carrion beetles, and other insects that are attracted to gross things. Though this particular strategy is rare, these aren’t the only plants that employ stinky smells to recruit such insects to aid in reproduction and dissemination. Consider dung mosses.

At least three genera (Splachnum, Tetraplodon, and Tayloria) in the family Splachnaceae include species that go by the common name, dung moss. All Splachnum and Tetraplodon species and many species in the genus Tayloria are entomophilous. Entomophily is a pollination strategy in which pollen or spores are distributed by insects. Compare this to anemophily, or wind pollination, which is the common way that moss spores are distributed. In fact, dung mosses are the only mosses known to exhibit entomophily. 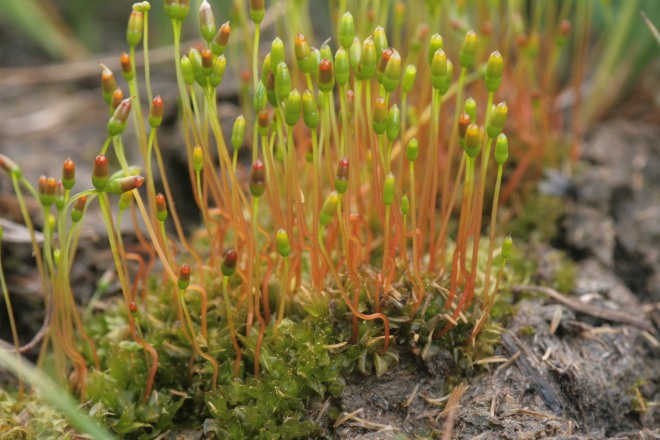 Before we go too much further, it’s important to understand how mosses differ from other plants. Mosses are in a group of non-vascular and non-flowering plants called bryophytes. Vascular tissues are the means by which water and nutrients are transported to and from plant parts. Lacking vascular tissues, water and nutrients are simply absorbed through the leaves and stems of mosses, which is why mosses are typically petite and prefer moist environments. Mosses also lack true roots and instead have rhizoids – threadlike structures that anchor the plants to their substrate of choice (such as dung).

Another major distinction between bryophytes and other plants is that bryophytes spend most of their life cycle as a haploid gametophyte rather than a diploid sporophyte. In most plants, the haploid gametophytes are the sperm (pollen) and egg cells; the sporophyte is everything else. In mosses, the familiar green, leafy structure is actually the gametophyte. The gametophyte houses sperm and egg cells, and when the egg is fertilized by sperm it forms a zygote that develops into the sporophyte structure which extends above the leafy gametophyte. A capsule at the top of the sporophyte contains spores which are eventually released and, upon finding themselves on a suitable substrate in a hospitable environment, germinate to produce new plants. The spore then is comparable to a seed in vascular, seed-bearing plants.

As stated earlier, the spores of most mosses are distributed by wind. Dung mosses, on the other hand, employ flies in the distribution of their spores. They attract the flies by emitting scents that only flies can love from an area on the capsule of the sporophyte called the apophysis. This area is often enlarged and brightly colored in yellow, magenta, or red, giving it a flower-like appearance which acts as a visual attractant. The smells emitted vary depending on the type of substrate a particular species of dung moss inhabits. Some dung mosses grow on the dung of herbivores and others on the dung of carnivores. Some even prefer the dung of a particular group of animals; for example, a population of Tetraplodon fuegiensis was found to be restricted to the feces and remains of foxes. However, dung is not the only material that dung mosses call home. Certain species grow on rotting flesh, skeletal remains, or antlers.

Splachnum ampullaceum inhabits the droppings of white-tailed deer. Had a wolf or coyote followed the scent of the deer into the bog, its droppings would been colonized by S. luteum. The chemistry of carnivore dung is sufficiently distinct from that of herbivores to support a different species. … Moose droppings have their own loyal follower. The family to which Splachnum belongs includes several other mosses with an affinity for animal nitrogen. Tetraplodon and Tayloria can be found on humus, but primarily inhabit animal remains such as bones and owl pellets. I once found an elk skull lying beneath a stand of pines, with the jawbone tufted with Tetraplodon.

Yellow moosedung moss (Splachnum luteum) has one of the largest and showiest sporophytes. (photo credit: www.eol.org)

The set of circumstances that converge to bring Splachnum into the world is highly improbable. Ripening cranberries draw the doe to the bog. She stands and grazes with ears alert, flirting with the risk of coyotes. Minutes after she has paused, the droppings continue to steam. … The droppings send out an invitation written in wafting molecules of ammonia and butyric acid. Beetles and bees are oblivious to this signal, and go on about their work. But all over the bog, flies give up their meandering flights and antennae quiver in recognition. Flies cluster on the fresh droppings and lap up the salty fluids that are beginning to crystallize on the surface of the pellets. Gravid females probe the dung and insert glistening white eggs down into the warmth. Their bristles leave behind traces from their earlier foraging trips among the day’s dung, delivering spores of Splachnum on their footprints.

The spores of dung mosses are small and sticky. When a fly visits these plants, the spores adhere to its body in clumps. The fly then moves on to its substrate of choice to lay its eggs, and the spores are deposited where they can germinate and grow into new moss plants. Flies that visit dung mosses receive nothing in return for doing so, but instead are simply “tricked” into disseminating the propagules. The story is similar with corpse flowers and carrion flowers; flies are drawn in by the smells and recruited to transmit pollen while receiving no nectar reward for their work.

There are 73 species in the Splachnaceae family, and nearly half of these species are dung mosses. Most are found in temperate habitats in both the northern and southern hemispheres, with a few species occurring in the mountains of subtropical regions. They can be found in both wet and relatively dry habitats. Dung mosses are generally fast growing but short lived, with some lasting only about 2 years. It isn’t entirely clear how and why mosses in this family evolved to become entomophilous, but one major benefit of being this way is that their spores are reliably deposited on suitable habitat.

Since Splachnum can grow only on droppings, and nowhere else, the wind cannot be trusted with dispersal. Escape of the spores is successful only if they have both a means of travel and a reserved ticket for a particular destination. In the monotonous green of the bog, flies are attracted to the cotton candy colors of Splachnum, mistaking them for flowers. Rooting about in the moss for non-existent nectar the flies become coated with the sticky spores. When the scent of fresh deer droppings arrives on the breeze, the flies seek it out and leave Splachnum-coated footprints in the steaming dung.