Journeying outside of low-earth orbit and setting up long-term or permanent colonies on other planets or moons is fraught with challenges. One obvious challenge is food production. Regular deliveries from Earth are costly and risky, and freshness isn’t always an option. So, perhaps food can be grown on site? NASA is currently exploring this question by carrying out a series of experiments using an aptly named piece of hardware called Veggie, which was delivered and installed on the International Space Station in the spring of 2014. Experiments began shortly thereafter, and last month NASA astronauts finally got to taste the leaves of their labor for the first time.

Veggie is a plant growth chamber that was developed by Orbital Technologies Corporation. It provides environmental conditions – such as light, temperature, and airflow – that are suitable for plant growth. Accompanying the delivery of Veggie were three sets of planting pillows – specially designed pouches that contain growing media, fertilizer, and seeds. The pillows are placed on rooting mats inside Veggie and watered using a wicking system . Light is delivered by red, blue, and green LEDs. The red and blue wavelengths are necessary for plant growth, and the green wavelength helps the plants look more appealing to the astronauts. 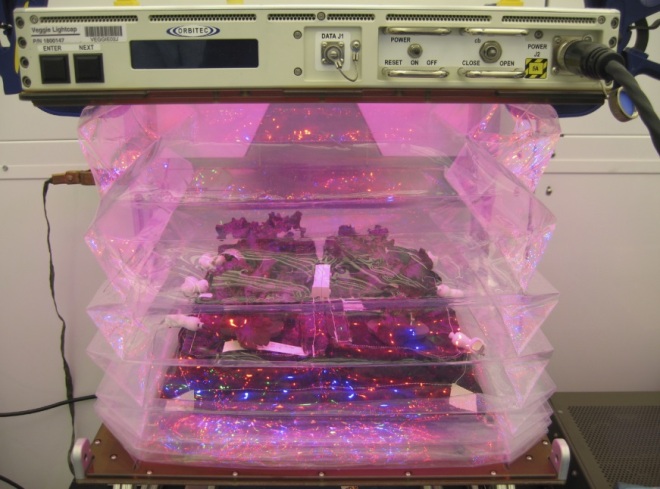 Two sets of pillows were seeded with a variety of red romaine lettuce called ‘Outredgeous.’ This particular plant was chosen because it is easy to grow, tastes good, and has high nutritional value. The first lettuce harvest was sent back to earth last October for a food safety analysis. Once it was deemed free of harmful bacteria and safe to eat, the astronauts were cleared to start the second round of red romaine, which they did in early July 2015. The third set of planting pillows contain zinnia seeds, and according to statements made by astronaut Scott Kelly on Twitter, it doesn’t sound like those have been grown yet.

After caring for the second round of lettuce plants for 33 days, it was finally time to taste them. The astronauts first cleaned each leaf with citric acid based sanitizing wipes and then sampled the leaves plain. Next they tried them with a little olive oil and balsamic vinegar. They shared their experience in real time via Twitter, which is documented in this New York Times article. They saved a few leaves for their Russian friends who were out on a spacewalk, and then packaged the rest up to be frozen and sent back to Earth for analysis. 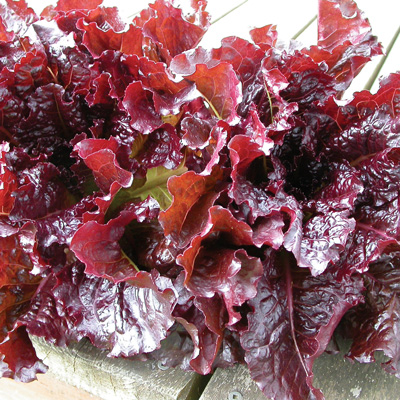 This isn’t the first time plants have been grown and eaten in space. Russian cosmonauts grew and consumed mizuna (Japanese mustard) back in 2002 using a plant growth chamber developed in collaboration with a lab at Utah State University. They have also used the growth chamber to grow peas, radishes, and other plants. Read more about these experiments here.

Growing plants in space, apart from providing fresh food, offers psychological benefits. In an otherwise sterile and metallic environment, having something green (or red, in the case of the lettuce) to look at and care for has the potential to lift the moods of crew members aboard the space station. NASA scientist, Dr. Gioia Massa, who is overseeing the project sums it up nicely, “The farther and longer humans go away from Earth, the greater the need to grow plants for food, atmosphere recycling, and psychological benefits. I think that plant systems will become important components of any long-duration exploration scenario.”

Want to learn more? Read about the project here, here, and here. Also watch this video about growing plants in space.

Just for fun, there is a great children’s fiction book involving plants in space called June 29, 1999 by David Wiesner which is definitely worth a look.

–Growing Plants on the Moon

2 thoughts on “Growing and Eating Lettuce in Space”