A few months ago at work I captured this photo of a frog inside of a pitcher plant. Do you see it? It is pretty well camouflaged and poking its head out just enough to intercept curious insects lured in by the promise of nectar, eating them before they can make their way into the tube. Either way, approaching insects are about to meet their fate. Whether by plant or by frog, they are destined to be consumed lest they turn away in time.

This frog was hiding inside the modified leaf of a species of Sarracenia, a carnivorous plant commonly known as a North American pitcher plant. There are at least eight species of Sarracenia, all of which naturally occur in the southeastern region of the United States. One species, Sarracenia purpurea, also occurs in the northeast, the upper Midwest, and throughout much of Canada. Sarracenia is in the family Sarraceniaceae along with two other genera of pitcher plants, Darlingtonia (the cobra plant, native to northern California and southern Oregon) and Heliamphora (the sun pitchers, native to South America). Plants in this family are not to be confused with the distantly related tropical pitcher plants which are in the genus Nepenthes (family Nepentheaceae).

The natural habitats of Sarracenia are sunny, open areas that remain permanently wet, including meadows, savannahs, fens, and swamps. The soils are acidic, nutrient poor, and typically composed of sandy peat commonly derived from sphagnum moss. In the southeast, less than 5% of the original (pre-European settlement) Sarracenia habitat remains, threatening its survival in the wild. Sarracenia oreophila (green pitcher plant) is currently listed as critically endangered on the IUCN Red List.

Flowering occurs in the spring, usually before pitchers form. Individual flowers are formed on tall stalks that rise straight up and then bend at the very top, hanging the flower upside down. Early flowering and tall flower stalks help prevent pollinating insects from being consumed by the plant. In his book The Savage Garden, Peter D’Amato describes the flowers as “showy, brilliant, and very unusual – a wonderful bonus to an already handsome class of foliage plants.” The flowers are either yellow or a shade of red and last about two weeks, after which the petals drop and a seed pod forms. Seeds are released from the fruits in the fall.

D’Amato writes that Sarracenia are among the “most ravenous” plants, with each leaf having the potential of trapping “thousands of nasty insects.” In some cases pitchers even flop over, heavy with the weight of bugs inside them. The specifics of capturing and killing insects varies between species of Sarracenia, but in general prey is lured to the opening of the pitcher with a combination of nectar, scent, and color. Upon entering the tube, gravity, waxy surfaces, drugs, and hairs force the captives downward where they are eventually consumed by enzymes and microbes. Digested insects provide the plant with nutrients necessary for growth – nutrients that otherwise are taken up by the roots of plants that occur in more nutrient rich soils.

Sarracenia purpurea (purple pitcher plant) is unique in that its pitchers lack a “hood” or “lid” – a standard feature of other species of Sarracenia that helps keep rain from entering the pitchers. Instead, the pitchers fill with water and insects are killed by drowning. The most brutal killer is probably Sarracenia psittacina (parrot pitcher plant) which has an additional opening inside of its pitcher. The opening is small and difficult to find again once an insect is on the wrong side of it. The inside walls of the pitcher are covered in long, sharp, downward pointing hairs, and the struggling insect is pierced repeatedly by the hairs as it makes its way to the bottom of the tube to be digested. 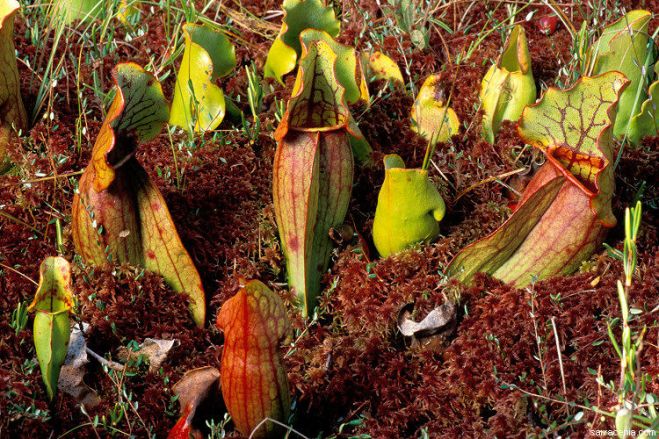 According to D’Amato, “the Sarracenia are one of the simplest carnivorous plants to grow, and certainly among the most fun and rewarding.” Learn more about growing North American pitcher plants by consulting D’Amato’s book and/or by visiting the website of the International Carnivorous Plant Society.

Want to learn more about Sarracenia? The Plants are Cool, Too! web series has a great video about them: