Evolution is a difficult subject to learn, let alone teach. Because evolution is generally such a slow process, it involves a timeline that is challenging for us to comprehend. Evolution is also commonly misunderstood, so misconceptions abound, be they purposeful misrepresentations, gaps in understanding, or otherwise. Wrapping one’s brain around even the basic tenets of evolution can take years of study, yet it is one of the most fundamental concepts of biology; failing to understand it stifles one’s knowledge of and appreciation for the study of life on Earth. On the flipside, gaining an understanding of the workings of evolution can inspire a greater appreciation for our place in the universe and can instill in oneself the urgency of conservation.

Despite being a tough subject to grasp, there is no reason why children should be exempt from learning about it. However, because it is such a complex topic, adults can struggle to find ways to explain it. Luckily, there are some great children’s books about evolution that introduce the subject in basic ways. These books are good starting points and can help cultivate a desire to explore the topic further. Understanding evolution and the science surrounding our world and the broader universe is a lifelong pursuit. Children will benefit from a head start.

What follows are reviews of a handful of books that may be useful in teaching kids about the theory of evolution.

I Used to Be a Fish by Tom Sullivan

This book is an excellent place to start. It is a quick and easy read, and it introduces – in a very simple way – the evolutionary lineage of humans. It doubles as a lesson on evolution and, as Sullivan puts it, “a tribute to every child’s power to transform their lives and to dream big,” which is achieved by highlighting the imagination of the main character and defining evolution as the gradual development over a lifetime towards achieving goals and aspirations.

In the Author’s Note, Sullivan briefly explains some important aspects of evolution: it is “a very slow process” that “occurs over generations to entire populations of creatures,” it doesn’t occur in a straight line like the book implies but instead looks “more like a tree with many complicated branches,” and “it doesn’t happen because a creature wants it to.”

Timeline from I Used to Be a Fish by Tom Sullivan. Look how far we’ve come! 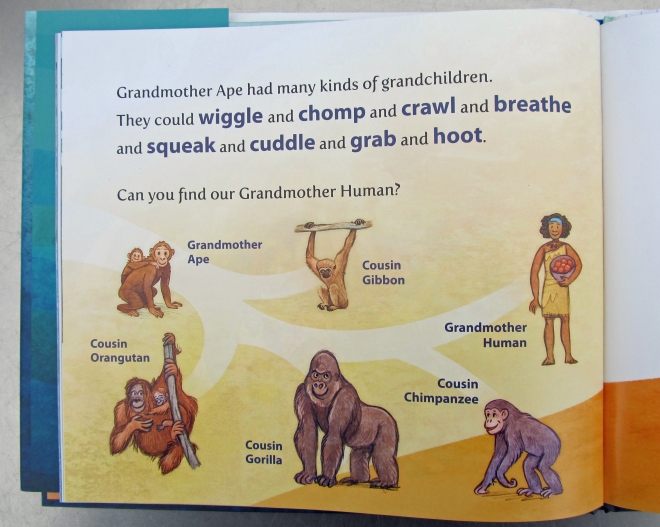 A larger version of “Our Evolutionary Family Tree” is featured at the end of the story followed by several pages of additional information that adults can use to further explain evolution to children, including discussions on three major concepts of evolution (descent with modification, artificial selection, and natural selection), more details on the main characters in the book, and a guide to correcting common errors about evolution. 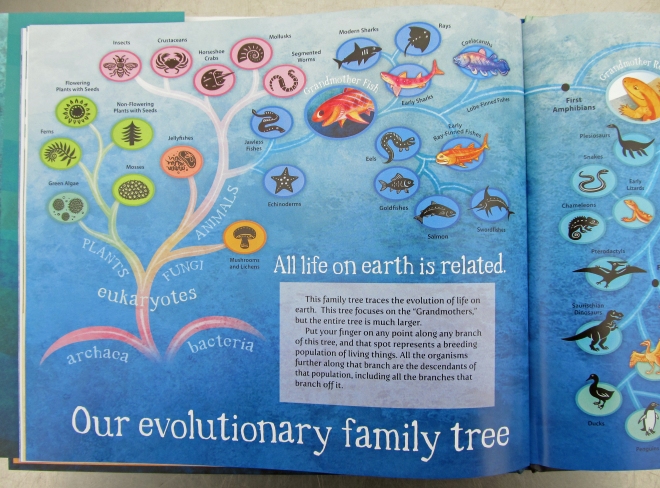 When Fish Got Feet, Sharks Got Teeth, and Bugs Began to Swarm by Hannah Bonner

This book is much more text heavy than the first two, but is still very approachable. The illustrations are both humorous and informative, and Bonner excels at explaining complex topics in a way that makes them easy to digest. Rather than covering hundreds of millions of years of evolution like the first two books, this book focuses mainly on events that occurred during the Silurian and Devonian periods – between 360 and 444 million years ago. It was during this time that plants were making their way to land and diverging into many different forms. Arthropods were doing the same. During this period, the earth’s atmosphere became more oxygen rich and soil began to accumulate largely due to the growth and expansion of land plants. 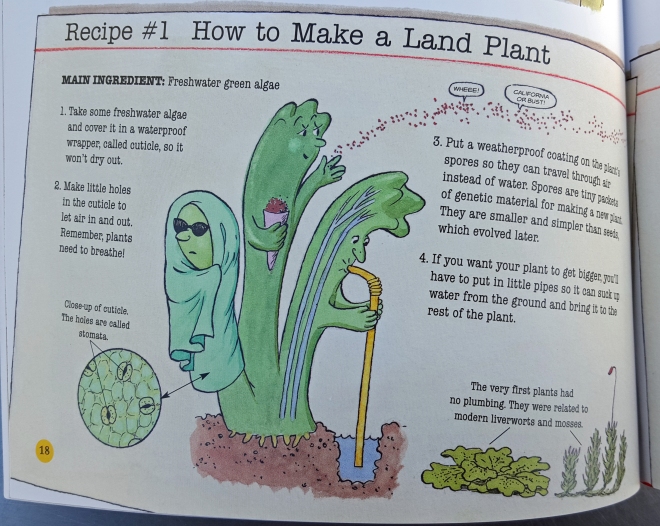 This was also a period of great diversification in the fish world. Jaws were becoming more common and skeletons made of bone (as opposed to cartilage) were developing.  The first tetrapods (fish with legs) emerged from the oceans and onto land in the Devonian period. These tetrapods were our early ancestors, and Bonner explains how some of the skeletal features that fish developed during this time period were precursors to our current skeleton.

Unlike the first two books, the evolution of plants receives some attention in Bonner’s book. It is during the Devonian period that the first trees and seed-bearing plants appear. As in the other books, there are additional resources at the end, including this important warning by Bonner: “Please remember that anyone can set up a Web site, so not everything you will encounter will be good science.” 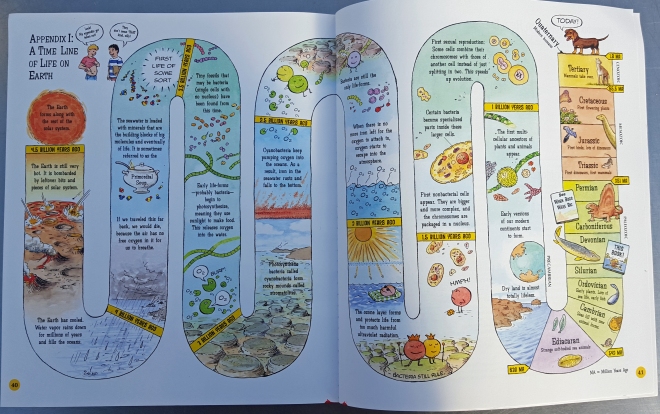 Key to helping children understand evolution is understanding it ourselves, and there are, of course, endless resources out there to help with this. I will suggest just two additional books. In keeping with the spirit of children’s books, there is a great illustrated biography of Charles Darwin (who is considered the Father of Evolution) called Darwin For Beginners by Jonathan Miller and Borin Van Loon. It’s basically Darwin’s life told in graphic novel form. And keeping with the fish theme, you can’t go wrong with Neil Shubin’s, Your Inner Fish, a fascinating look into the origins of many of the parts, pieces, and other features of the human body.

Do you have a favorite book, children’s or otherwise, about evolution? Please share it in the comment section below.

5 thoughts on “Children’s Books About Evolution”