Last week the New York Times published an article about declining populations of insects in the United States, specifically monarch butterflies and wild bees. Monarch butterflies migrate south to Mexico each fall, typically arriving by the millions on the first of November. This year was tragically different, because the monarchs did not arrive on the first, and when they finally began trickling in a week late, there were significantly less of them. In his article, The Year the Monarch Didn’t Appear, Jim Robbins discusses why this and similar scenarios are becoming commonplace.

Increased pesticide use and global climate change are certainly contributing factors in the decline of insect populations; however, Robbins suggests that the loss of native habit is the major culprit. For example: monarch butterflies rely on milkweed (Asclepias spp.); in fact, their larvae feed exclusively on it. No milkweed = no new monarch butterflies. Urban sprawl, farmland expansion, Roundup Ready crops, and herbicide use along roadways all result in declining milkweed populations, as well as declines in the populations of other beneficial native plants.

And that’s not all. “Around the world people have replaced diverse natural habitat with the biological deserts that are roads, parking lots and bluegrass lawns, ” says Robbins, meanwhile landscape plants are selected for their ornamental appeal, “for their showy colors or shapes, not their ecological role.” In support of his argument, Robbins cites studies which found that native oak and willow species in the mid-Atlantic states are hosts to 537 and 456 species of caterpillars, respectively. On the other hand, non-native, ornamental ginkgoes host three.

Insects provide numerous ecosystem services. They help break down waste products, they are pollinators of countless species of plants (including many of our crops), and they are food sources for larger animals (including birds, reptiles, and amphibians)…and this is just the short list. As John Muir said, “When we try to pick out anything by itself, we find it hitched to everything else in the Universe.” Thus, the decline of native insect populations is a concern that should not be taken lightly. 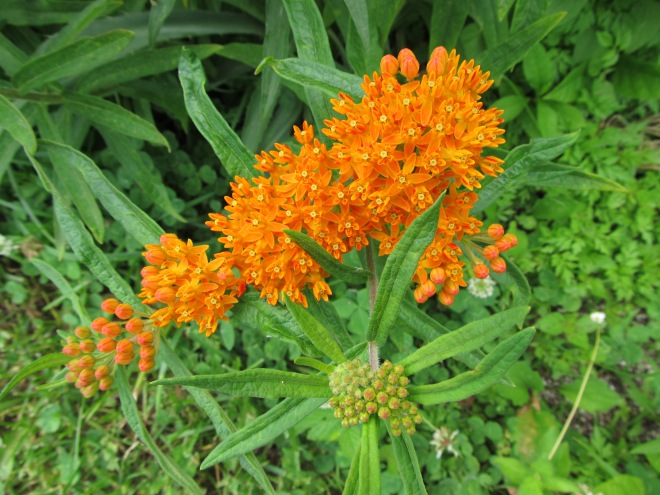 If you haven’t already, please consider including some native plants in your yard. If you don’t have a yard, suggest the idea of landscaping with native plants to your friends. To learn more about monarch butterflies and their plight (including information on how to grow milkweed), visit www.monarchwatch.org.

Invasive species are a major ecological concern, and so considerable effort is spent controlling them, with the ultimate goal (albeit a lofty one in most cases) of  eradicating them. The term “invasive species” describes plants, animals, and microorganisms that have been either intentionally or unintentionally introduced into an environment outside of their native range. They are “invasive” because they have established themselves and are causing adverse effects in their non-native habitats. Some introduced species cause no discernible adverse effects and so are not considered invasive. Species that are native to a specific habitat and exhibit adverse effects following a disturbance can also be considered invasive. (White-tailed deer are an example of this in areas where human activity and development have reduced or eliminated their natural predators resulting in considerably larger deer populations than would otherwise be expected.) Defining and describing invasive species is a challenging task, and so it will continue to be a topic of debate among ecologists and conservation biologists for the foreseeable future.

The adverse effects of invasive species are also not so straightforward. Typical examples include outcompeting native flora and fauna, disrupting nutrient cycles, shifting the functions of ecosystems, altering fire regimens, and causing genetic pollution. Countless hours of research and observation are required in order to determine the real effects of invaders. The cases are too numerous and the details are too extensive to explore in this post; however, I’m sure that I will cover more aspects of this topic in the future.

For now I would just like you to consider a novel approach to eradicating invasive species that has recently come to my attention. That is to simply eat them. Why not, right? The voracious appetite of humans has helped drive certain species to extinction in the past, so why can’t our stomachs assist in removing introduced species from their non-native habitats? The folks at Invasivore.org are suggesting just that, and by encouraging people to consume invasive species, they are also promoting awareness about invasive species, an awareness that they hope “will lead to decreasing the impacts of invasive species by preventing introductions, reducing spread, and encouraging informed management policies.”

“If you can’t beat ’em, eat ’em!” And so they provide recipes in order to encourage people to harvest, prepare, and consume the invasive species in their areas. Some of the invasive plant species they recommend people eat are Autumn Olive (Autumn Olive Jam), garlic mustard (Garlic Mustard Ice Cream), Japanese honeysuckle (Honeysuckly Simple Syrup), purslane (Purslane Relish), and Canada goldenrod (Strawberry-Goldenrod Pesto). And that’s just a sampling. One might ask if we are encouraged to eat invasive species and ultimately find them palatable, won’t our demand result in the increased production of these species? The Invasivores have considered this, and that is why their ultimate goal is raising awareness about the deleterious effects of invasive species. In the end, we should expect to see our native habitats restored. Our craving for Burdock Chips on the other hand will have to be satisfied by some other means. 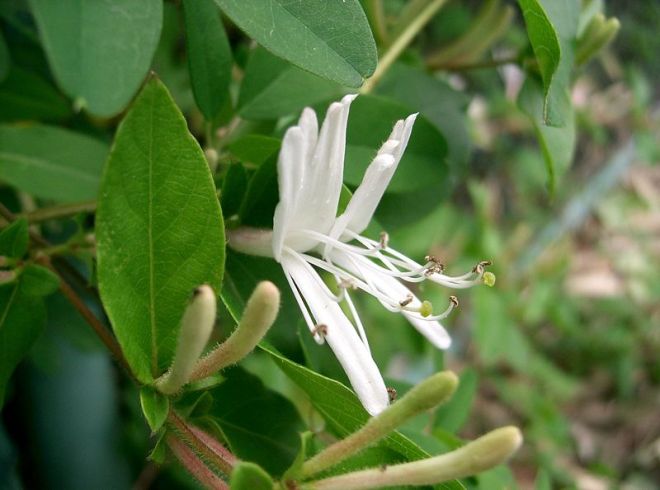 Other websites that encourage the consumption of invasive species:

Wetlands are ecosystems that are characterized by their vegetation (aquatic plants), their soils (formed during anaerobic conditions caused by being flooded or saturated with standing water), and, of course, their state of being largely saturated with water either seasonally or permanently. Examples of natural wetlands include bogs, fens, marshes, and swamps. Wetlands can also be constructed by humans for the purpose of collecting storm water runoff from urban areas in an effort to reduce the risk of flooding and avoid overwhelming municipal sewer systems during large rainstorms.

Wetlands are the most threatened type of ecosystem on earth, and we are losing them at a steady clip. Major threats to wetlands include land development, pollution (agricultural and otherwise), and the introduction of invasive species. Considering the benefits we receive from having wetlands around, it is imperative that we protect them. Earth Gauge offers some suggestions on how to do so. 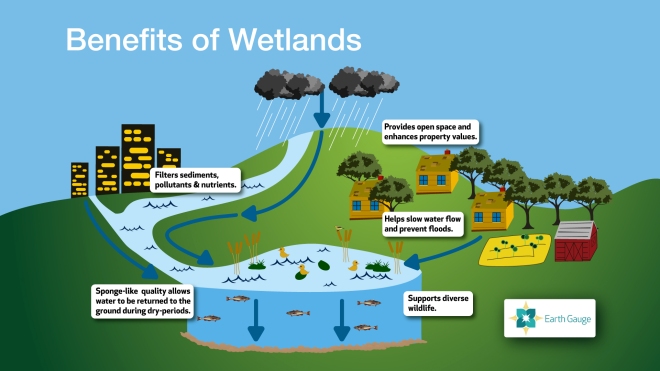 Speaking of wetlands, one of my favorite wetland plant species is marsh marigold (Caltha palustris). It is in the buttercup family (Ranunculaceae) and is common in wetlands throughout the Northern Hemisphere. I became familiar with this plant when I was volunteering at a wetland in Edwardsville, IL. Perhaps you’ve seen it growing in a wetland near you. 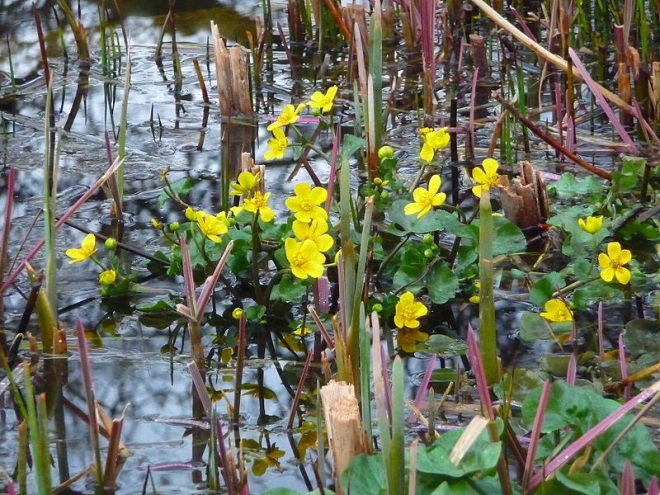