Few plants are as ubiquitous and widespread as the common yarrow, Achillea millefolium. A suite of strategies have made this plant highly successful in a wide variety of habitats, and it is a paragon in terms of reproduction. Its unique look, simple beauty, and tolerance of tough spots have made it a staple in many gardens; however, its hardiness, profuseness, and bullish behavior have also earned it the title, “weed.” Excess water encourages this plant to spread, but in a dry garden it tends to stay put (or at least remain manageable), which is why it and several of its cousins are often included in or recommended for water efficient landscapes. 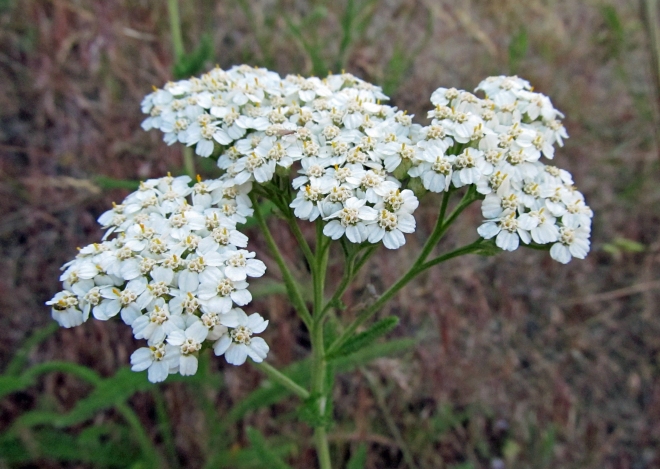 Common yarrow is in the aster family (Asteraceae) and is one of around 85 species in the genus Achillea. It is distributed throughout North America, Europe, and Asia. European plants have long been introduced to North America, and hybridization has occurred many times among the two genotypes.

Yarrow begins as a small rosette of very finely dissected leaves that are feathery or fern-like in appearance. These characteristic leaves explain its specific epithet, millefolium, and common names like thousand-leaf. Slightly hairy stems with alternately arranged leaves arise from the rosettes and are capped with a wide, flat-topped cluster of tightly-packed flowers. The flower stalks can be less than one foot to more than three feet tall. The flowers are tiny, numerous, and consist of both ray and disc florets. Flowers are usually white but sometimes pink.

The plants produce several hundred to several thousand seeds each. The seeds are enclosed in tiny achene-like fruits which are spread by wind and gravity. Yarrow also spreads and reproduces rhizomatously. Its roots are shallow but fibrous and abundant, and they easily spread horizontally through the soil. If moisture, sun, and space are available, yarrow will quickly expand its territory. Its extensive root system and highly divided leaves, which help reduce transpiration rates, are partly what gives yarrow the ability to tolerate dry conditions. 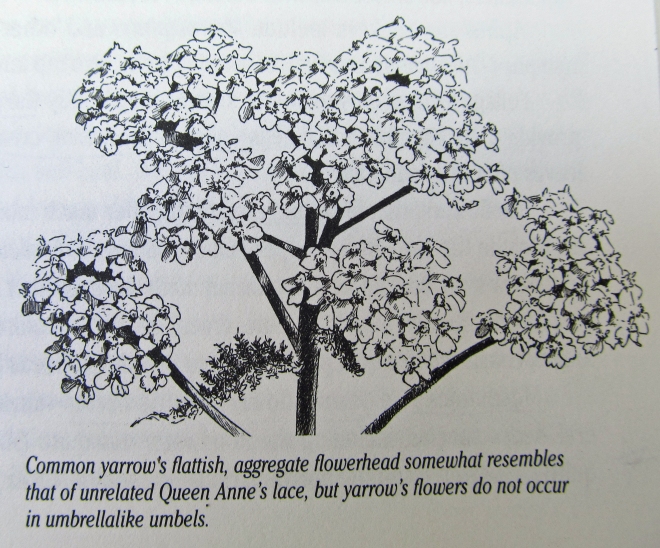 Illustration of Achillea millifolium by Amelia Hansen from The Book of Field and Roadside by John Eastman, which has an excellent entry about yarrow.

Common yarrow has significant wildlife value. While its pungent leaves are generally avoided by most herbivorous insects, its flowers are rich in nectar and attract bees, butterflies, beetles, flies, and even mosquitoes. Various insects feed on the flowers, and other insects visit yarrow to feed on the insects that are feeding on the plant. Despite its bitterness, the foliage is browsed by a variety of birds, small mammals, and deer. Some birds use the foliage in constructing their nests. Humans have also used yarrow as a medicinal herb for thousands of years to treat a seemingly endless list of ailments.

Yarrow’s popularity as an ornamental plant has resulted in the development of numerous cultivars that have a variety of flower colors including shades of pink, red, purple, yellow, and gold. While Achillea millefolium may be the most widely available species in its genus, there are several other drought-tolerant yarrows that are also commercially available and worth considering for a dry garden.

Achillea filipendulina, fern-leaf yarrow, is native to central and southwest Asia. It forms large, dense clusters of yellow-gold flowers on stalks that reach four feet high. Its leaves are similar in appearance to A. millefolium. Various cultivars are available, most of which have flowers that are varying shades of yellow or gold. 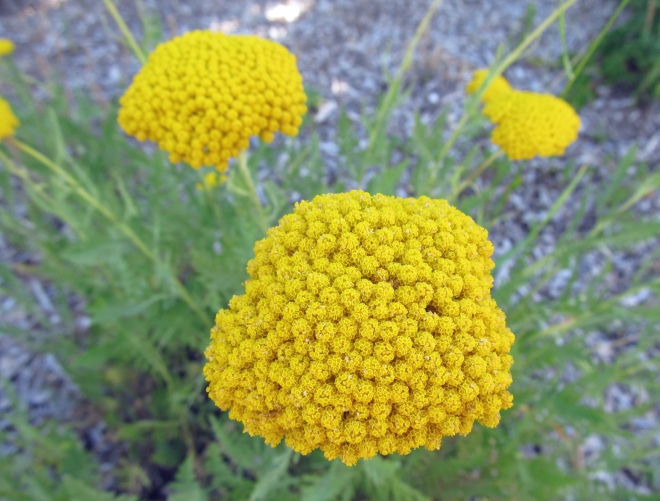 Achillea alpina, Siberian yarrow, only gets about half as tall as A. filipendulina. It occurs in Siberia, parts of Russia, China, Japan, and several other Asian countries. It also occurs in Canada. Unlike most other species in the genus, its leaves have a glossy appearance and are thick and somewhat leathery. Its flowers are white to pale violet. A. alpina is synonymous with A. sibirica, and ‘Love Parade’ is a popular cultivar derived from the subspecies camschatica. 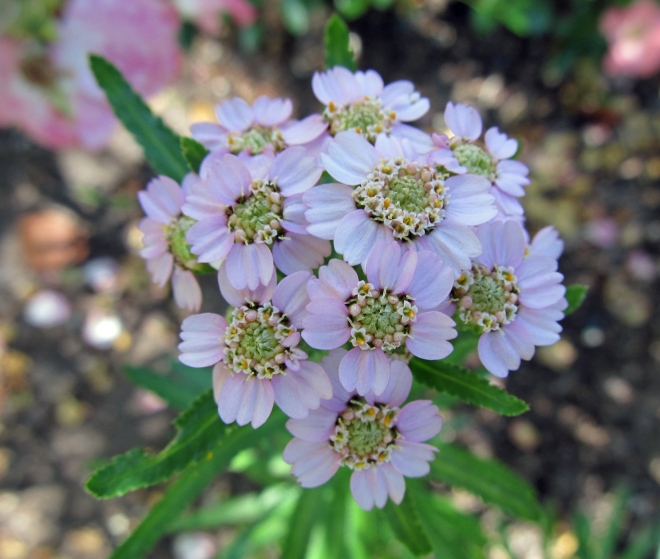 Achillea x lewisii ‘King Edward,’ a hybrid between A. tomentosa (woolly yarrow) and A. clavennae (silvery yarrow), stays below six inches tall and forms a dense mat of soft leaves that have a dull silver-gray-green appearance. Its compact clusters of flowers are pale yellow to cream colored. Cultivars of A. tomentosa are also available. 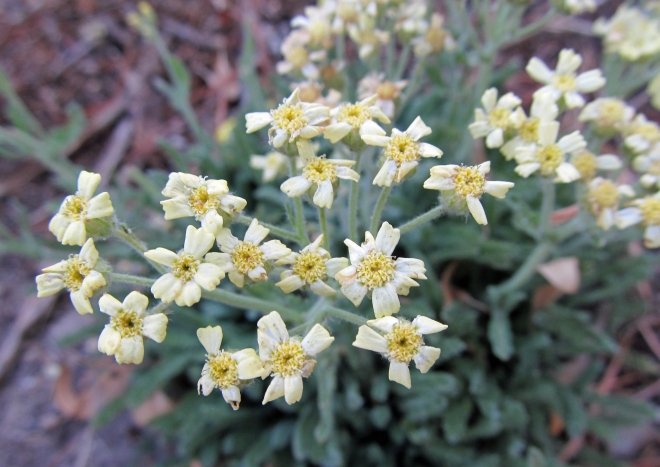 Achillea ptarmica, a European native with bright white flowers, and A. ageritafolia, a native of Greece and Bulgaria that is low growing with silvery foliage and abundant white flowers can also be found in the horticulture trade along with a handful of others. Whatever your preferences are, there is a yarrow out there for you. Invasiveness and potential for escape into natural areas should always be a concern when selecting plants for your garden, especially when considering a plant as robust and successful as yarrow. That in mind, yarrow should make a great addition to nearly any drought-tolerant, wildlife friendly garden. 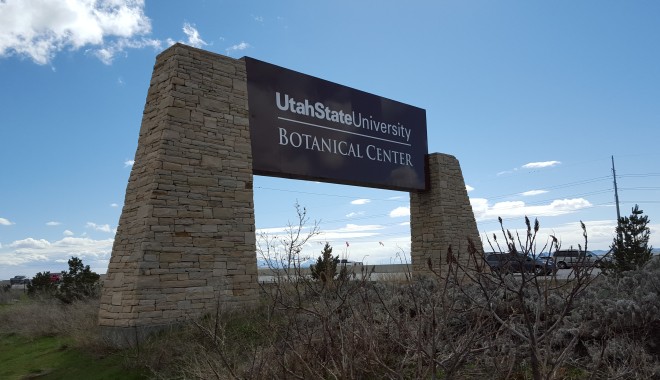 Last month I was in Utah visiting family, so I took the opportunity to check out the Utah State University Botanical Center in Kaysville. Located along Interstate 15, it’s hard to miss, and yet I had never visited despite having driven past it numerous times. Of course, March is not the ideal time to visit a botanical garden in Utah. Spring was in the air, but the garden still had a lot of waking up to do. Regardless it was fun to check the place out and imagine what it might have to offer in its prime.

The vision of the USU Botanical Center is “to guide the conservation and wise use of plant, water, and energy resources through research-based educational experiences, demonstrations, and technologies.” Some of the demonstration gardens are located alongside a series of ponds that are stocked with fish and are home to wetland bird species and other wildlife.  Next door to the ponds is the Utah House, a demonstration house modeling energy efficient design and construction along with other sustainable practices. The landscaping surrounding the Utah House, apart from the vegetable garden, consists mainly of drought-tolerant plants.

Utah State University has recently acquired some neighboring land and is in the process of expanding their demonstration gardens and arboretum. I enjoyed my brief visit (particularly the time I spent watching the ducks) and will make it a point to stop again, both during a warmer time of year and as the gardens continue to expand. 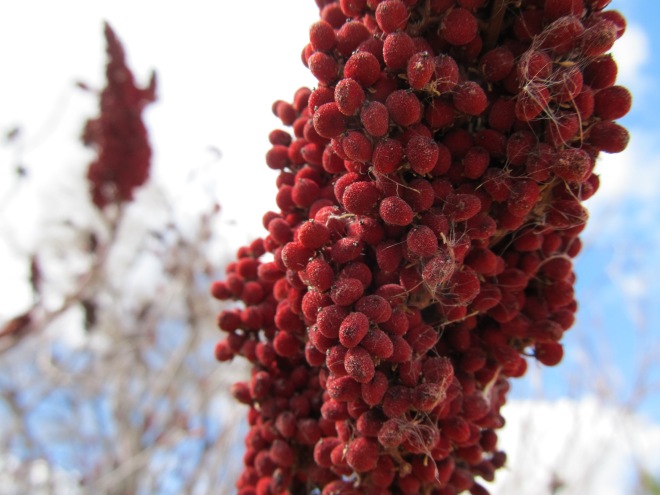 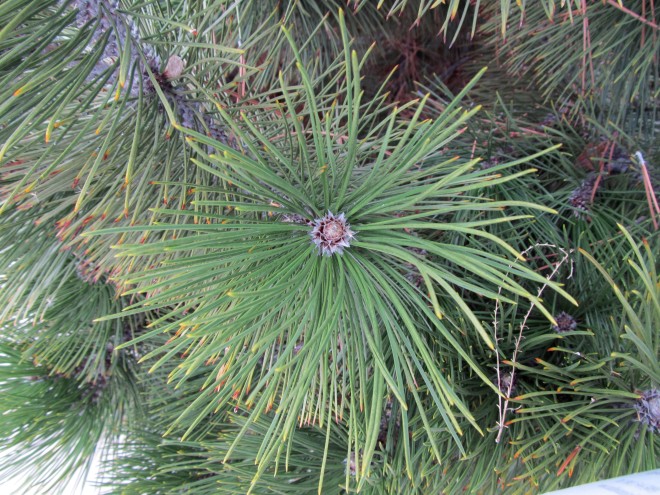 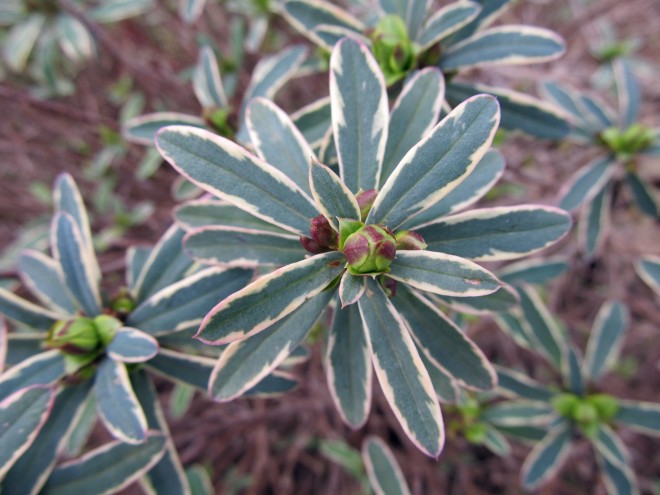 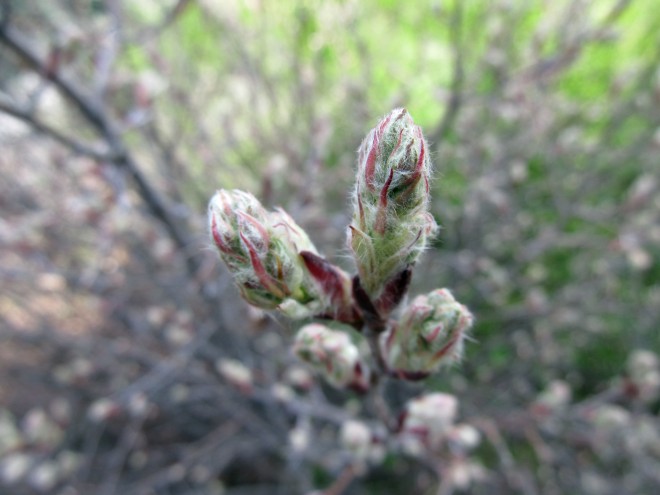 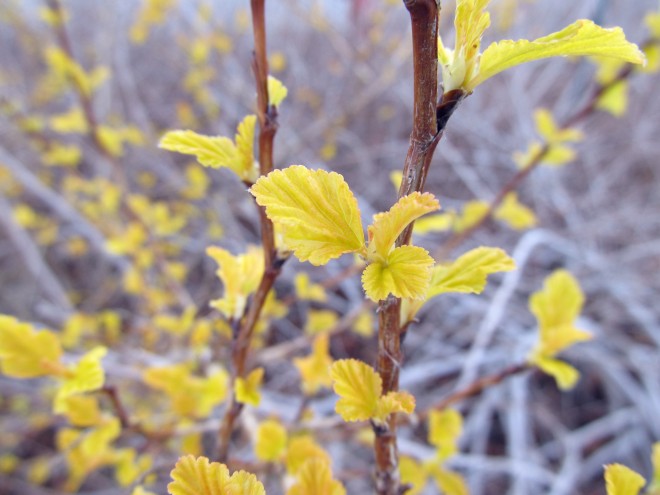 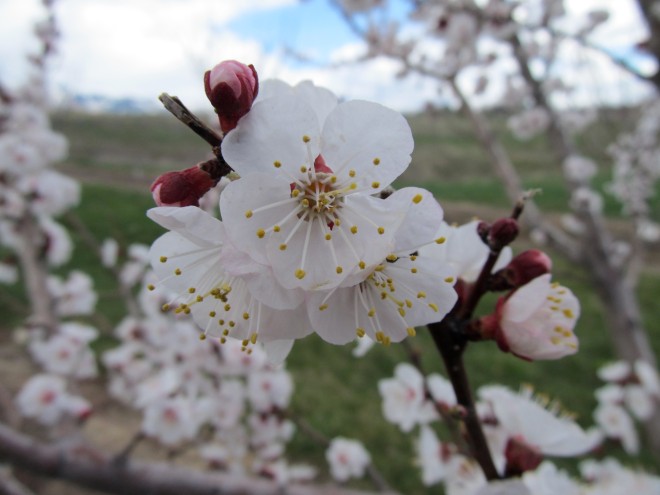 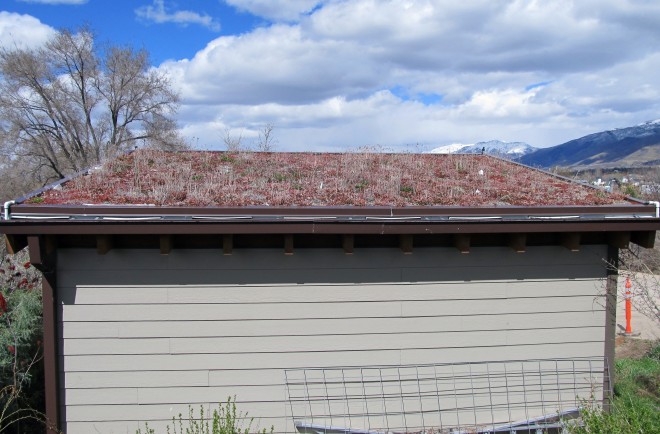 Green roof on a shed near the Utah House 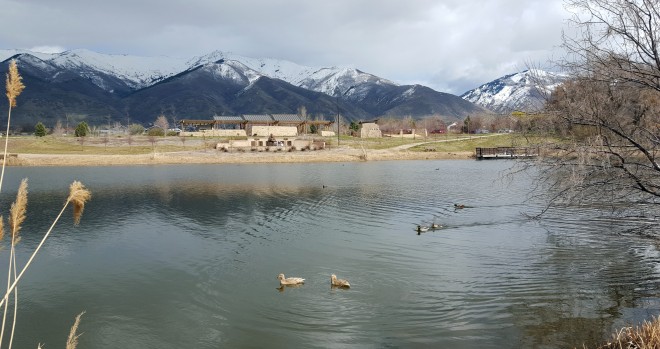 The wetlands at USU Botanical Center offer a great opportunity to teach the public about the importance of wetland habitat and wetland conservation. Signage informs visitors that despite the fact that wetlands and riparian areas only make up 1% of Utah, 80% of Utah’s wildlife use such areas at some point during their life. Learn more here.

What botanical gardens are you visiting this spring? Leave your travelogues and recommendations in the comments section below.

Hailing from dry washes and riverbanks of the desert southwestern United States and northern Mexico, desert willow is a tough tree or large shrub with delicate, showy flowers and wispy foliage. Its beauty and its ruggedness has made it a popular plant for dry gardens. It requires little attention maintenance-wise, yet attracts all kinds of attention otherwise. If you live in a desert climate that generally stays above 0 degrees Fahrenheit during the winter, this plant belongs in your garden. 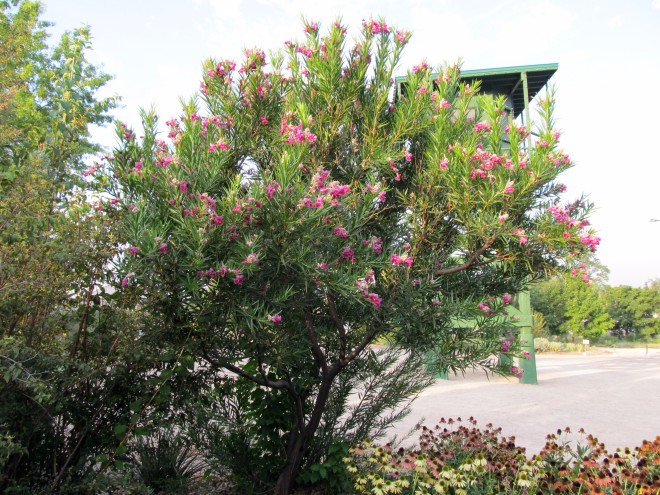 A member of the family Bignoniaceae – a family that consists of at least 8o genera including catalpa (Catalpa spp.) and trumpet vine (Campsis spp.) – Chilopsis linearis is the sole member of its genus. The common name, desert willow, refers to its habitat and its long, slender, oppositely and alternately arranged leaves that resemble those of many willows (Salix spp.). Other common names include flowering willow, willowleaf catalpa, desert catalpa, and false-willow. There are two recognized subspecies – linearis and arcuata.

Desert willow is found most commonly in areas where seasonal flooding occurs. Known as desert dry washes – or simply dry washes or desert washes –  these are areas in the desert where runoff from heavy rains accumulates resulting in saturated soils followed by a prolonged dry period. Groundwater often remains accessible year-round to the deep roots of plants in this type of habitat. Desert willow shares this habitat with several other large shrubs and small trees including mesquite (Prosopis spp.), palo verde (Parkinsoinia spp.), and smoketree (Psorothamnus spinosus). Desert willow occurs along stream banks and river banks as well, where seasonal flooding also occurs.

Desert willow generally reaches a width of 10 to 15 feet and a height of at least 15 feet, although it has the potential to grow taller than 30 feet. It often has an open and sprawling or leaning habit, but it can be pruned to look more tree-like. Pruning can also result in more flowering, since flowers appear on new growth and pruning encourages growth. Watering this plant during the dry season can also lead to a flush of growth and more flowering. This is something to keep in mind, as it is the flowers that are the star of the show. 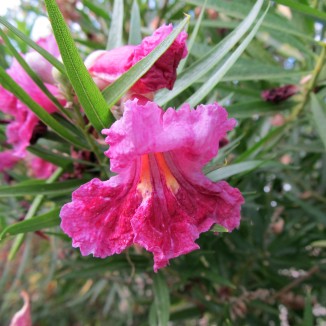 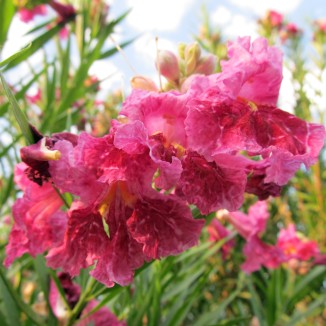 Persisting from late spring through midsummer (and sometimes longer), the 1 to 2 inch, trumpet-shaped, pink to rose to purple blossoms are hard to miss. They occur singularly or in clusters at the tips of branches. The ruffled-edges of the petals and the prominent streaks of color within the corolla tube add to the attraction. Hummingbirds, butterflies, and bumblebees are common visitors to these fragrant flowers. Summer rains or occasional watering can encourage flowering throughout the summer. Overwatering, on the other hand, can be detrimental.

The flowers eventually form long slender seed pods called capsules that reach up to 10 inches long. Inside the capsules are a series of hairy seeds. The hairs form small wings on the sides of the seeds. The seeds are eaten by a variety of bird species. Various species of birds can also be seen nesting in desert willow, and a variety of other animals use desert willow for browsing and/or for cover. 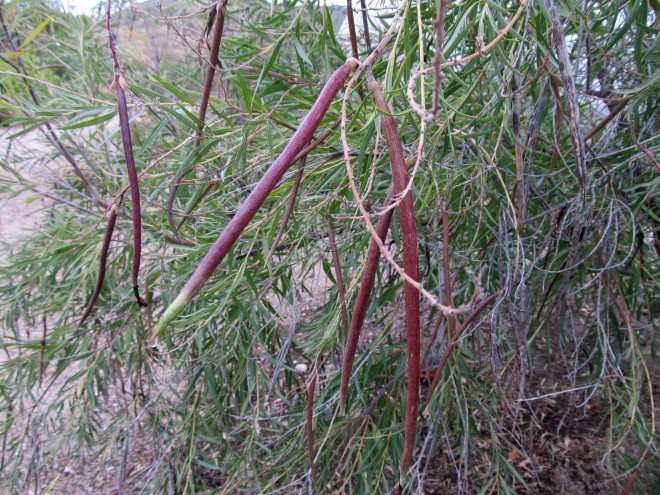 The fruits of Chilopsis linearis 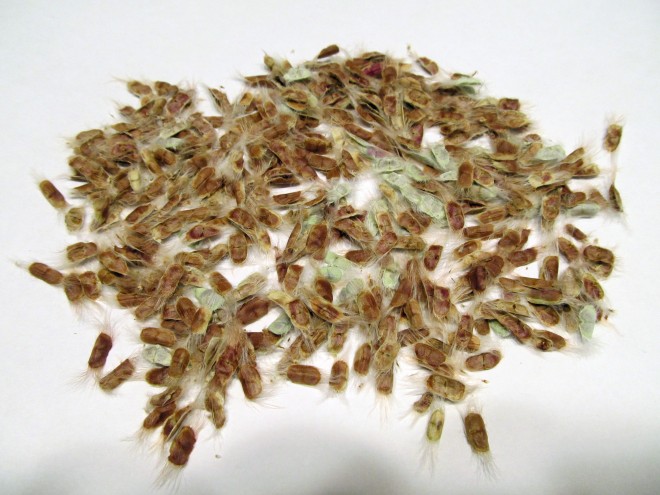 Desert willow prefers sunny, southwest facing sites and tolerates most soil types. It performs best in soils that are well drained, low in organic content, and have a pH that is neutral to alkaline. The soil can be saturated at times, but should be given a chance to dry out – just like in its natural habitat. Avoid the impulse to add fertilizer.

Desert willow is said to be easy to propagate from cuttings or from seeds. It is commercially available, and several cultivars have been developed offering diverse flower colors and other special traits. It’s easy to grow, requires little attention, and provides an eye-catching floral show – all excellent reason to add this plant to your water-efficient landscape.

One tip from my experience seeing it survive the winters of southwestern Idaho: the deciduous leaves of Chilopsis linearis don’t reappear until very late in the spring – so late, in fact, that one might start to worry that the plant has perished. Don’t fret though; some winter kill is possible if sub-zero temperatures were experienced, but most likely it is still alive.

The photos in this post were taken at Idaho Botanical Garden in Boise, Idaho.