While we’re on the topic of pine cones, have you ever considered their scales and the spirals they form? Nature is replete with spirals, so perhaps it’s no surprise that they are found in pine cones. The more interesting thing is that the number of spirals found on pine cones are almost always Fibonacci numbers. But maybe that’s not that surprising either, as Fibonacci numbers are also pretty common in nature.

Add 1 plus 1 and you get 2. Add 2 plus 1 and you get 3. 3 + 2 = 5, 5 + 3 = 8, and 8 + 5 = 13. One, two, three, five, eight, and thirteen are Fibonacci numbers. Continue adding the sum to the number that came before it, and that’s the Fibonacci Sequence. The ratio of two neighboring Fibonacci numbers is an approximation of the golden ratio (e.g. 8/5 = 1.6). This is commonly represented by drawing a series of squares on graph paper and then drawing a spiral across the squares. Each square drawn is larger than the last in accordance with the Fibonacci sequence, and the spiral drawn through the squares is a logarithmic spiral. 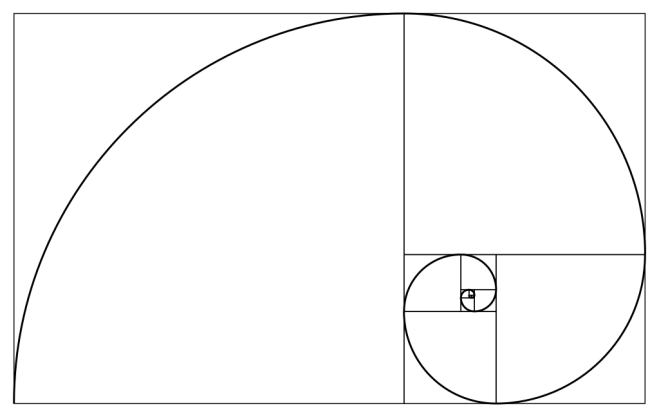 So, what does this have to do with pine cones? Well if you count the number of spirals that are going to the right, then count the number of spirals going to the left, you usually end up with two adjacent numbers in the Fibonacci sequence. Most often it’s either 5 and 8 or 8 and 13. You can find this same pattern in lots of other plant parts, including the aggregate fruits of pineapples, the disc flowers of sunflowers (and other plants in the aster family), the bracts of artichoke flowers, florets on a cauliflower, and leaf arrangements of all sorts of other plants.

The arrangement of leaves is called phyllotaxis, and when the leaves on a stem form a spiral pattern it’s called a phyllotactic spiral. The benefit the plant receives from having its leaves grow in a spiral formation down the length of its stem is actually quite simple – it keeps them from shading each other out and thereby maximizes their exposure to the sun. If you measure the angle between each leaf, the angle should be the same between each adjacent leaf on the stem. In order for the number of spirals to be a Fibonacci number, the leaves have to be oriented at a specific angle from each other. But this isn’t always the case. Depending on the angle, the number of spirals could be part of some other number sequence, like Lucas numbers perhaps.

While the specifics of plant growth can be quite complex, the reason for the patterns that result is actually quite simple. As plants grow new parts, they are put in a spot where there is room for them to grow, which is at some angle from the part that grew before it. Once that angle is “chosen,” it generally doesn’t change, and as more plant parts grow, a spiral forms (or no spiral forms at all, depending on the pattern of growth). If plant parts are oriented at a specific angle (~ 137.5o), the numbers of spirals end up being Fibonacci numbers. For a more thorough and entertaining explanation of all this, check out this three part video series from Khan Academy. It’s well worth the watch.

And now an example: 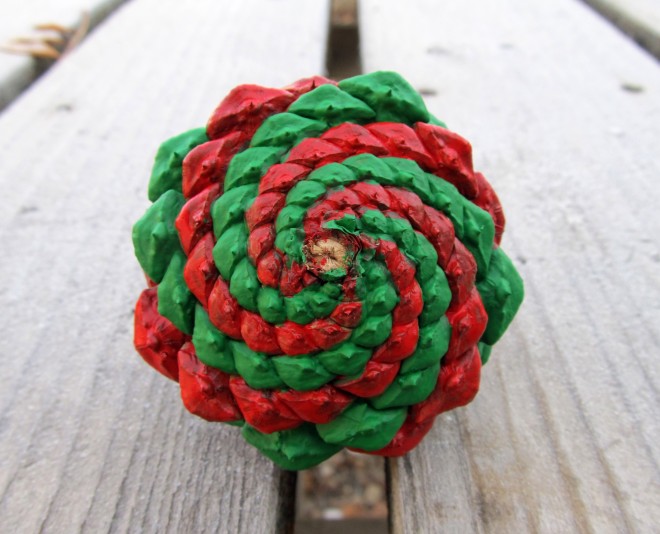 Count the number of right-hand spirals on this ponderosa pine cone. There are 8. That’s a Fibonacci number!

Count the number of left-hand spirals on this ponderosa pine cone. To make it easier to count, you can start or end with the top left spiral that has alternating red and green scales. There are 13. That’s another Fibonacci number!

And now your mission, should you choose to accept, is to find a pine cone (or some other conifer cone) in which the number of right and left-hand spirals are not Fibonacci numbers. They’re definitely out there, so let me know what you find in the comment section below.

4 thoughts on “Pine Cones and the Fibonacci Sequence”