To kick off this year’s American Wetlands Month, I am reposting something I posted three years ago. I have updated the links and added a few more resources. In celebration, all Awkward Botany posts in May will have something to do with wetlands. An underlying goal of American Wetlands Month is to encourage people to get out and visit wetlands in their area and find out what they can do to help conserve them. Hopefully this series of posts helps to further that aim.

Wetlands are ecosystems that are characterized by their vegetation (aquatic plants), their soils (formed during anaerobic conditions caused by being flooded or saturated with standing water), and, of course, their state of being largely saturated with water either seasonally or permanently. Examples of natural wetlands include bogs, fens, marshes, and swamps. Wetlands can also be constructed by humans for the purpose of collecting storm water runoff from urban areas in efforts to reduce the risk of flooding and avoid overwhelming municipal sewer systems during large rainstorms.

Wetlands are the most threatened type of ecosystem on earth, and we are losing them at a steady clip. Major threats to wetlands include land development, pollution (agricultural, commercial, residential, etc.), and the introduction of invasive species. Considering the benefits we receive from having wetlands around, it is imperative that we protect them. Earth Gauge offers some suggestions on how to do so.

Speaking of wetlands, one of my favorite wetland plant species is marsh marigold (Caltha palustris). It is in the buttercup family (Ranunculaceae) and is common throughout the Northern Hemisphere. I became familiar with this plant when I was volunteering at a wetland in Edwardsville, IL. Perhaps you’ve seen it growing near you. 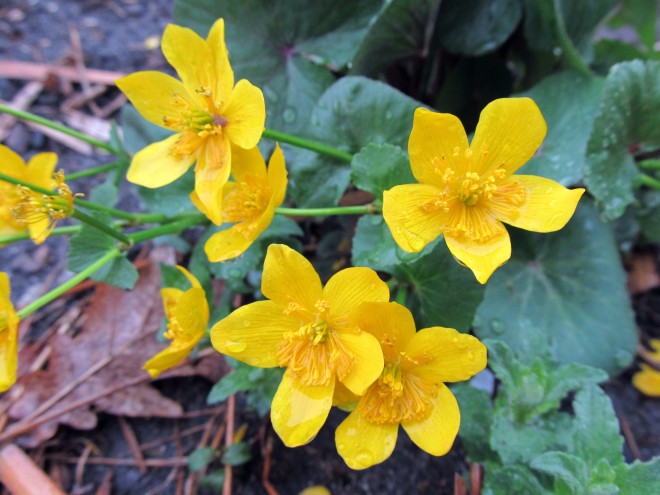