Hawaii is home to scores of plant species that are found nowhere else in the world. But how did those plants get there? In geological time, Hawaii is a relatively young cluster of islands. Formed by volcanic activity occurring deep within the ocean, they only just began to emerge above water around 10 million years ago. At that point the islands would have been nearly devoid of life, and considering that they had never been connected to any other body of land and are about 2,500 miles away from the nearest continent, becoming populated with flora and fauna took patience and luck.

As far as plant life is concerned, seeds and spores had to either be brought in by the wind, carried across the ocean by its currents, or flown in attached to the feathers of birds. When humans colonized the islands, they brought seeds with them too; however, its estimated that humans didn’t begin arriving on the islands until about 1,700 years ago. The islands they encountered were no longer barren landscapes, but instead were filled with a great diversity of plant and animal life. A chance seed arriving on the islands once in a blue moon does not fully explain such diversity.

This is where an evolutionary process called adaptive radiation comes in. A single species has the potential to diverge rapidly into many new species. This typically happens in new habitats where little or no competition exists and there are few environmental stresses. Over time, as genetic diversity builds up in the population, individuals begin to adapt to specific physical factors in the environment, such as soil type, soil moisture, sun exposure, and climate. As individuals separate out into these ecological niches, they can become reproductively isolated from other individuals in their species and eventually become entirely new species.

This is the primary process that led to the great floral diversity we now see on the Hawaiian Islands. Adaptive radiations resulted in more than 1000 plant species diverging from around 300 seed introductions. Before western colonization, there were more than 1,700 documented native plant species. Much of this diversity is explained by the rich diversity of habitats present on the volcanic islands, which lead to many species becoming adapted to very specific sites and having very limited distributions.

A small population size and a narrow endemic range is precisely the reason why Cyanea konahuanuiensis escaped detection until recently. In September 2012, researchers on the island Oahu arrived at a drainage below the summit of Konahua-nui (the tallest of the Ko’olau Mountains). They were surveying for Cyanea humboldtiana, a federally listed endangered species that is endemic to the Ko’olau Mountains. In the drainage they encountered several plants with traits that differed from C. humboldtiana, including hairy leaves, smooth stems, and long, hairy calyx lobes. They took pictures and collected a fallen leaf  for further investigation. 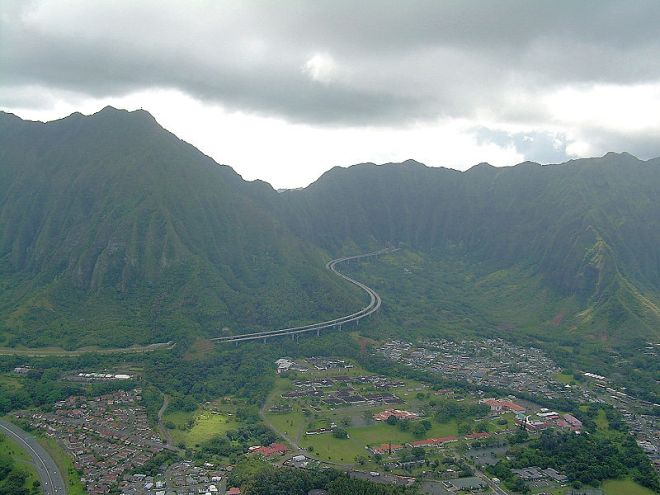 Initial research suggested that this was a species unknown to science. More information was required, so additional trips were made, a few more individuals were found, and in June 2013, a game camera was installed in the area. The camera sent back three photos a day via cellular phone service and allowed the team of researchers to plan their next trip when they were sure that the flowers would be fully mature. Collections were kept to a minimum due to the small population size; however, using the material they could collect, further analyses and comparisons with other species in the Cyanea genus and related genera demonstrated that it was in fact a unique species, and so they gave it the specific epithet konahuanuiensis after the mountain on which it was found. It was also given a common Hawaiian name, Haha mili’ohu, which means “the Cyanea that is caressed by the mist.”

The total population of Cyanea konahuanuiensis consists of around 20 mature plants and a couple dozen younger plants. It is considered “critically imperiled” and must overcome some steep conservation challenges in order to persist. To start with, the native birds that pollinate its flowers and disperse its seeds may no longer be present. Also, it is likely being eaten by rats, slugs, and feral pigs. Add to that, several invasive plant species are found in the area and are becoming increasingly more common. While the researchers did find some seedlings in the area, all of the fruits that they observed aborted before they had reached maturity. Lastly, the population size is so small that the researchers say a landslide, hurricane, or flash flood “could obliterate the majority or all of the currently known plants with a single event.”

Seeds collected from immature fruits from two plants were sown on an agar medium at the University of Hawaii Harold L. Lyon Arboretum. The seeds germinated, and so the researchers plan to continue to collect seeds “in order to secure genetic representations from all reproductively mature individuals in ex situ collections.”

C. konahuanuiensis is not only part of the largest botanical radiation event in Hawaii, but also the largest on any group of islands. At some point in the distant past, a single plant species arrived on a Hawaiian island and has since diverged into at least 128 taxa represented in six genera, Brighamia, Clermontia, Cyanea, Delissea, Lobelia, and Trematolobelia, all of which are in the family Campanulaceae – the bellflower family. Collectively these plants are referred to as the Hawaiian Lobelioids. Cyanea is by far the most abundant genus in this group consisting of at least 79 species. Many of the lobelioids have narrow distributions and most are restricted to a single island.